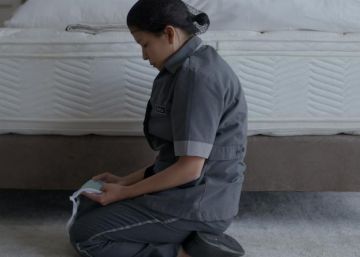 The inner universe of the human being, his doubts, worries, challenges and ecstasy, does not rarely depend on his work activity. Get to see a worker during his day, minute by minute for hours day after day, in his solitude and in his relationships, with those in his level and with those above, holding the downpour and glimpsing his illusions, and he will have his heart and his guts, he will begin to know him a little better. Maybe more in certain jobs; and surely even more if she is a woman in a country where machismo reigns. The maid, The Mexican opera Lila Avilés's interesting debut, adopts that formula: the exhaustive monitoring, camera attached to her skin, without sentimentalities or value judgments, of an employee of a large hotel dedicated to the rooms, to her cleaning and to her order, with time limit and in precarious conditions.

Work of small physical gestures that end up defining personalities and environments, including social classes, The chambermaid It is visualized through a photograph of cold and soulless cut that increases the glacial atmosphere of those large mastodon of unpolluted rooms and personal isolation, where selfishness, eccentricity and habitual contempt of customers reign, and not rarely by means of fixed planes in (not) ugly places, the most disadvantaged corners of the hotel: forklifts, interior corridors, laundries. And, as the only contrast to the whitish gray of the image, a red dress that the protagonist has found forgotten in one of the rooms, which exerts both a recurring sequence before the deviation of the internal regulations and the deception of solidarity, as of counterpoint of color, embodied in emotions, in a life that is disappearing.

Despite the repetition of actions practiced by Aviles in a deliberate way, and, only in principle, little interest in situations, for everyday, there is something fascinating in the struggle of that woman faced with the impersonality of the human condition, in a interior that is but a form of jail. Until the exit of each day, just in the last second of the movie, the only moment of light in which a street is seen.