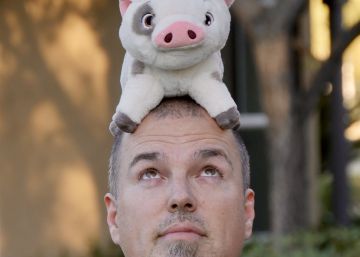 Each Disney movie hosts years of work. The composition of the narration, the characterization of the protagonists, the creation of the film universe … each step requires a huge group of professionals specialized in very diverse areas. In the case of Valencian Iker de los Mozos, his knowledge focuses on the articulation of characters. During the seven years that De los Mozos worked for the factory he participated in films such as Frozen, Vaiana or Big hero six, the next installment of the collection Disney art–Pixar, which shreds the work of creating the tapes and can be obtained this Sunday in the kiosks with EL PAÍS or on the web of Collections.

When De los Mozos arrived at Disney, the company had two projects underway: Break Ralph Y Frozen He joined the team of the latter. Tell that each project is like an assembly line. “Each character is molded first as if it is a classic sculpture. Then we make the structures or buttons that emulate the skeletons or muscles, both facial and body level, which allow them to move later, ”explains the expert. With that structure they move on to the next step, which is animation, breathe life into them. Thus, the Spanish has contributed to the smile of Púa, the pig friend of Vaiana, is so effective that the viewer returns the smile to the screen.

The art of Big Hero Six.

The art of Rompe Ralph.

The art of Tiana and the toad.

The art of Frozen.

These titles close the collection, available in full on the web. Each delivery is priced at 12.95 euros.

This process is included in the books The art of Disney-Pixar, with illustrations that reflect the evolution of the most relevant characters, comments from the directors of the tapes, and so on. The art of Big Hero Six, Movie directed by Don Hall and Chris Williams, which is delivered this Sunday, reveals the creative keys of the first project exclusively on Disney superheroes. For this reason he relied on Pixar and Marvel for its production.

De los Mozos has worked on many films in this collection of EL PAÍS, including one of the biggest challenges he faced: Zootropolis Animators often recycle part of the work they do on a character to use as a base on others. “But in this case we are talking about the fact that one was a giraffe, the other a lion, all were different,” he says, so the efforts multiplied.

In addition to the movements of the face or body, the Spanish has also worked on the hair and clothing of the characters, a function in which you have to take care of even the appearance of the weight of the fabrics. “Not only does it have to coincide with the physically correct, but it must be visually attractive, so it must be sculpted frame by frame,” he says, recognizing that it is strenuous work. He confesses that he even experienced the impostor syndrome, as he choked on some issues. “But I learned a lot,” he concludes.

Loewe, more conceptual and libertarian than ever at Paris Fashion Week