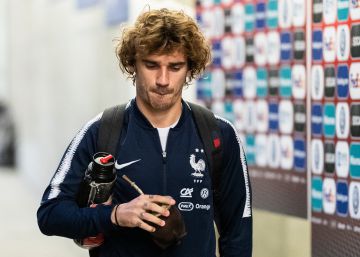 Barcelona will present on Friday Frenkie de Jong, has begun negotiations to pay in installments -or cheaper- the 120 million that since July 1 cost the letter of freedom of Antoine Griezmann -Before it amounted to 200 million- and it is paying special attention to Neymar's desire to return to the Camp Nou. Although the operation is especially complex, there are different variables that make it possible to hire the Brazilian, provided Paris Saint-Germain agrees to negotiate with Barça.

The club azulgrana is interested to know their intention to join Griezmann and Neymar with Messi and Luis Suarez. It is not simply a marketing operation that revalues ​​the brand regardless of whether it closes or not, but serves the sports interests of a league champion frustrated by not winning the Champions since 2015.

The incorporation of Griezmann seems assured since it has been announced even by Miguel Ángel Gil Marín, CEO of Atlético, the club of French international origin. It has also been confirmed by sources close to the directive and technical services of Barcelona. The doubts about his signing occurred after transcending the reluctance that there were in some heavy weights of the wardrobe and between a part of the fans, annoying Barcelona because of the disdain shown last season by the player when he discarded the Barcelona offer and renewed by Atlético.

The Barcelona meeting tries to close the operation in the best possible economic conditions while Atlético does not admit any reduction unless they include players of their interest such as the Portuguese side Nelson Semedo.

The return of Neymar is equally delicate if we look at the economic parameters and the contrary opinion of many Barcelona fans. The Brazilian, however, has the complicity of Messi and Luis Suárez, with whom he shares a WhatsApp group as revealed by the Barca and Argentina captain. The forward wants to force his transfer to Barcelona and the PSG aims to recover the 222 million of the termination clause that the summer of 2017 paid the azulgrana club for 10 of Brazil.

The mandate of Josep Maria Bartomeu ends in 2021, the same year that the Leo Messi contract expires. Two years ahead, the Barça president aims to strengthen not only the football team but also the different professional sections to aspire to the reconquest of Europe, a scenario that is resisted after this season also went blank after opting for seven drinks continental

The women's football team has made the signing of Jennifer Hermoso official; hockey skates have joined the Portuguese Helder Nunes; The handball will feature the Croatian Luka Cindric and Futsal, with Daniel Shiraishi. The objective in the basketball is of high flights: to close the signing of Nikola Mirotic after its periplo in the NBA once renewed the contracts of Svetislav Pesic and Víctor Claver. Cory Higgins and Brandon Davies will arrive and Álex Abrines will return.

The negotiation could include some players like Philippe Coutinho I Ivan Rakitic which would be pretended by the Parisian club and its coach, Thomas Tuchel. It remains to be seen what would be the future of Ousmane Dembélé in the event that the highs of Neymar and Griezmann set. The French striker seems to have a market and Barcelona will need to sell both to meet the salary limit and to clean up an economy that is going through a complicated situation despite the fact that on June 30 it managed to square off the 2018-2019 season.

The club needed to enter around 70 million to present a balance sheet that could be approved at the next meeting of partners and finally has collected 77.5 million for the transfers of Jasper Cillessen to Valencia (35 million), André Gomes to Everton (25) , Denis Suárez to Celta (13 plus 3.1 variables), Marc Cardona to Osasuna (2.5) and Marc Cucurella to Eibar (2). They have also been terminated by contract termination or assignment Thomas Vermaelen, Jeison Murillo, Kevin-Prince Boateng and Douglas Pereira.

And, during the course, they were transferred Paco Alcácer (Borussia Dortmund, 21 million), Lucas Digne (Everton, 20.3), Yerri Mina (Everton, 30.2), Paulinho Alcántara (Guangzhou, 42), Munir El Haddadi (Seville, 1). Aleix Vidal (Sevilla, 8.5), Marlon Santos (Sassuolo, 6), José Manuel Arnáiz (Leganés, 5) and Iñigo Ruiz de Galarreta (Las Palmas, 0.5). It remains to be resolved, on the other hand, the future of footballers like Rafinha as well as some of Barcelona B.

Revenues will be essential to deal with the possible signings subsequent to those of De Jong (75 million) and Norberto Neto (25 and 9 of variables) plus those intended by Griezmann (120) and Neymar, impossible to assess at the moment for more than the parameters they move between 100 and 300 million. The technical services estimate that the team also needs a left side able to compete with Jordi Alba and do not give up the bid for Donny van de Beek (Ajax) after knowing that Matthijs de Ligt will surely land in Juventus.

The series will begin at the moment with the presentation on Friday of De Jong midfielder, signed in January. The presence in the act has not been announced of coach Ernesto Valverde, ratified by the president Josep Maria Bartomeu long before the carrousel of starts and entrances began and, therefore, it is supposed that also worthy of the challenge of gathering Griezmann-Neymar.

A more effective Valencia breathes at the expense of Villarreal