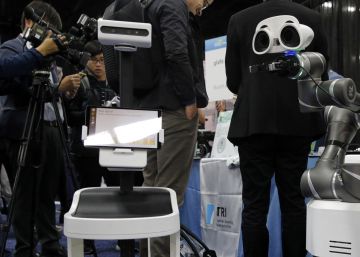 The CES It has been the scenario in which the most innovative technological devices of each year have been presented since 1967: from the VHS video recorder or DVD players to high-definition televisions, tablets or 3D printers. If in 2019 the largest consumer technology fair in the world was marked by the presentation of a televisionroller onon, the first commercial quantum computer or curious inventions like cars with legs, it is expected that this year technologies such as 5G, autonomous driving or voice assistants lead the event.

In total, more than 4,500 exhibitors will present their new devices between January 7 and 10 in Las Vegas: from technology giants to hundreds of emerging companies. As in Barcelona at the MWC (the world mobile congress), the days leading up to the event, large manufacturers such as Samsung or LG will already present news.

The CTA (the association of technology companies in the United States, organized by the CES) expects about 170,000 people from more than a hundred countries to attend this great fair, in which there will also be more than 300 conferences and discussion tables. As a novelty, Apple will return to CES after about 30 years of absence. Your privacy director, Jane Horvath, will participate this Tuesday in a round table on privacy together with other experts in this field such as Erin Egan, from Facebook, or Susan M. Shook, from the Procter & Gamble consumer goods group.

In addition to this type of debate about different challenges that technology poses in our lives, these will be the great trends that will be presented at the event:

The advances of 5G

2019 was the 5G takeoff year. Countries like Spain, Japan, China, United Kingdom, Italy or the United States began to deploy this technology. At the same time, manufacturers such as LG, Samsung or Xiaomi launched their first 5G compatible smartphones. They also began to see the first use cases in sectors like medicine, the Internet of Things, the automotive or agriculture

Steve Koenig, vice president of Market Research of the CTA, at a conference before the start of the fair on the technological trends that will mark the CES, stressed that 5G will enable the farm of the future: it will have sensors on the ground and in the sky – thanks to the drones -, automated robots, and farmers controlling multiple data and screens. The latter, according to Koenig, will be able to know how much they can harvest and manage resources better each week thanks to predictive analysis.

Although we will still have to wait to see a massive implementation of this technology, more and more companies experiment with it. Companies such as Verizon, Sprint, AT&T, Nokia or Ericsson are expected to demonstrate at CES that these networks are now ready to operate and enable speeds 20 times higher than the current 4G – although in the future they are expected to be up to 100 times greater – and Universal coverage in mass events such as concerts or football matches. To all this, he adds latency decrease to milliseconds That is, the response time from when an order is given to a device until it is executed.

Each year the CES is a meeting point for companies that work in the connected car. Some of the most outstanding vehicles in the last edition were the Harley-Davidson electric motorcycle or the Bell Helicopter air taxi. Also the car with legs on the wheels of Hyundai. This vehicle allowed users to drive, walk or even climb on any terrain.

10 car manufacturers will present their new products at the fair

In this edition, 10 car manufacturers will present their new products at the fair. Among them, Audi, BMW, Ford, Honda, Nissan or Toyota. It is expected that in the coming days they will reveal technologies that improve connectivity and vehicle safety. Also flying means of transport. “We will see more like these and they will be electric,” Koenig said while showing a photograph of Bell Nexus, a flying vehicle presented at the last edition of CES.

IBM announced in January 2019 at CES the first quantum computer for commercial use, Q System One. At that time the career in the field of quantum computing had only just begun. It includes companies such as Microsoft, Honeywell, Rigetti Computing, IonQ, Intel, NTT and Google.

This last technological giant, which will also be present at the fair, published in October 2019 in the scientific magazine Nature one of the greatest advances in quantum computing history. The Mountain View company said he achieved in just 200 seconds an operation to calculate random numbers that the world’s most powerful supercomputer would take at least 10,000 years. This finding would be the first empirical demonstration of the concept of quantum supremacy, which consists in performing a task in a quantum computer using fewer resources than in a classic computer.

Still, there is still a long way to go. Currently, quantum computers available to researchers only serve to test algorithms in small problems. This is expected to change over time and that in the future quantum computing will revolutionize industries such as manufacturing, pharmaceutical and petrochemical.

In 2019 it was revealed that companies such as Amazon, Google or Apple had workers who listened to private conversations of users with their voice assistants. After the controversy, they were forced to cancel the listening programs and to be more transparent with your customers.

Despite the controversy, the sale of smart speakers has not stopped growing. In the second quarter of 2019 alone, sales of these devices grew by 96%, to 30.2 million units, according to a report by the Strategy Analytics consultancy. Everything indicates that this trend will continue. Statist The figure is expected to rise from 3,250 million attendees in 2019 to 5,110 million in 2021 and 8,000 million in 2023. Companies such as Google, Amazon or Mercedes-Benz are expected to use the CES to announce the latest news from their virtual assistants.

In addition to voice recognition, Lesley Rohrbaugh, CTA’s market research director, explained that they will also give a lot to talk about facial recognition and voice detection. These technologies have already begun to be part of the smart home. Rohrbaugh gives as an example the retinal scanning security systems or the refrigerators capable of analyzing what foods they have inside.

While the presentations of the main smartphones are reserved for the MWC In Barcelona, ​​televisions are usually one of the main dishes of CES. Manufacturers show finer models every year, with smaller frames and They occupy less space in the home. In 2019 LG introduced the first roller OLED TV. In this way, it is intended to prevent television from occupying space in the living room when it is not used. Samsung, meanwhile, opted for the user to configure the device to their liking and decide what size and shape they want it to take.

This year the leading manufacturers will present new 8K devices at CES. In addition, some brands will take advantage of the fair to show transparent screens or televisions with barely frames. This is the case of Samsung with the Q950, whose front is 99% screen.

Extended reality is a concept that brings together augmented reality, virtual reality and mixed reality. In Spain between 2016 and 2018, businesses around these three immersive techniques have grown by 86.6%, according to the 2018 XR Report, prepared by The App Date, Oarsis and Fundación Telefónica. Waiting for these technologies to be perfected and their use to be generalized, there are already different use cases. For example, they already allow students practice a heart operation without being in an operating room or creating a work of art without painting on a canvas.

In this edition at CES, companies such as BrianCo, Hypervsn, Insta360, Teslasuit will show their progress in this area and new devices. They are also expected to offer immersive experiences in all industries: from manufacturing to healthcare or agriculture.

If I don’t have the updated application, will I lose my WhatsApp account?

The mystery of Pável Dúrov, the creator of Telegram