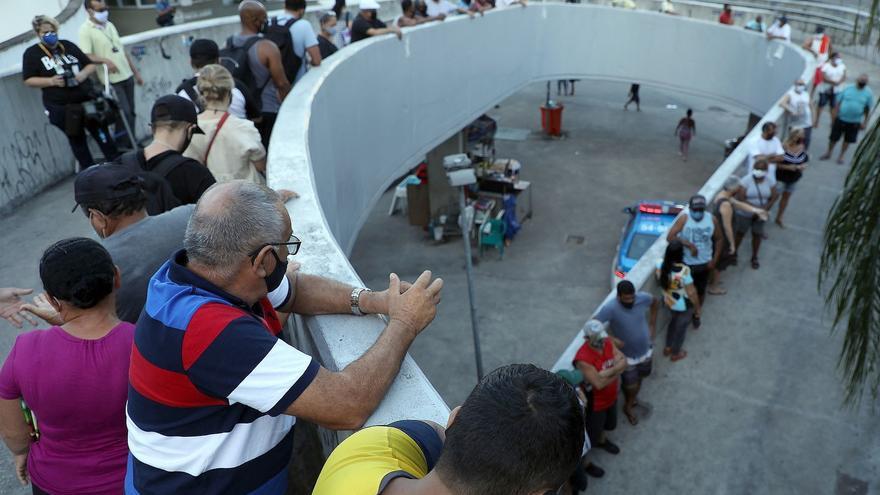 The center-right won the mayoralties of Sao Paulo and Rio de Janeiro this Sunday. In the latter city, the ‘Bolsonarismo’ has also suffered a new blow, after the defeat in the second round of the municipal elections of Brazil of the current councilor, the evangelical bishop Marcelo Crivella.

This Sunday 38 million people were called to the polls in Brazil, 25% of the country’s voters, to elect mayors in 57 large cities. Among them, Recife, where the Workers’ Party (PT) of former president Luiz Inácio Lula da Silva signed its debacle after losing the possibility of winning a large capital.

In Sao Paulo, the largest electoral college in the country with nine million voters, the projections of the polls were fulfilled with the re-election of Mayor Bruno Covas, of the center-right Brazilian Social Democracy Party (PSDB). The councilor has the endorsement of the current state governor, Joao Doria, Bolsonaro’s main political rival among the conservatives.

Covas has been re-elected with 59.3% of the votes, which is a wide advantage over the university professor and leader of the homeless Guilherme Boulos (40.6%), who could not go to vote after testing positive for coronavirus in the final stretch of the electoral campaign.

Boulos, 38, has risen as the main voice of the left in Brazil after reaching the polls by the hand of the emerging Socialism and Freedom Party (PSOL), a formation that emerged in 2004 after a purge promoted by the PT, and has assumed a part of the leading role that for decades Lula has had within the progressive camp.

In Rio de Janeiro, the Mayor’s Office fell into the hands of former mayor Eduardo Paes, who obtained 64.11% of the votes after receiving critical support from a diverse group of parties from both the left and the right who share their animosity towards the president Jair Bolsonaro.

Crivella (35.89%) had the backing of the leader of the Brazilian extreme right, who had his cards in Rio de Janeiro after the blow suffered in the first round by the candidates blessed by him.

Bolsonaro, who has no training after leaving the Social Liberal Party (PSL) last year due to differences with its leaders, transferred his public support to a total of 13 candidates, 11 of whom were defeated at the polls.

In addition to Rio de Janeiro, the ‘Bolsonarismo’ also gave way this Sunday in Fortaleza (northeast), where Wagner Sousa Gomes, known as ‘Captain Wagner’, lost by a narrow margin.

Despite the fact that the left managed to contain the bleeding experienced in the municipal elections of 2016, the traditional Workers’ Party ended up confirming the disaster already experienced in the first round after losing the elections in Recife and Vitoria (northeast), the two capitals that it disputed .

In Recife, Marilia Arraes, Lula’s political goddaughter, lost to her cousin Joao Campos, who became the youngest elected mayor in a Brazilian capital at the age of 27.

In Vitoria, a former electoral stronghold of the PT, the Republican party candidate, Commissioner Lorenzo Pazolini, ousted the progressive Joao Coser with 58.50% of the votes.

This is the first time that the PT, considered for many years as the main benchmark of the progressive camp in Brazil, will not govern any of the Brazilian capitals since 1985.

The PT, which has already ruled Sao Paulo, the country’s largest city, twice, reached the record of nine capitals in 2004, in the second year of Lula’s presidential term (2003-2010).

With a record abstention in Sao Paulo and Rio de Janeiro, the process took place almost without incident and under strict security measures due to covid-19, since Brazil is the second country with the most deaths in the world from the disease, with more of 172,000 deaths, and the third with the most cases, with about 6.3 million infections.

The scrutiny was notably faster than in the first round, when an attempted cyberattack delayed the release of the results by several hours.

In Brazil, voting is mandatory and is done by electronic ballot box, a method considered reliable according to specialists, but which has been questioned by President Jair Bolsonaro.

The far-right leader not only questioned Brazil’s electronic system today, but also took advantage of the appointment to denounce “fraud” in the US elections, where the vote is on paper.

“The press does not divulge it, but I have my information, and it is useless to tell you because they are not going to divulge it, that there really were a lot of fraud (in the United States elections),” said the Brazilian head of state , one of the few leaders who has not yet congratulated Joe Biden on his election as president of the United States.