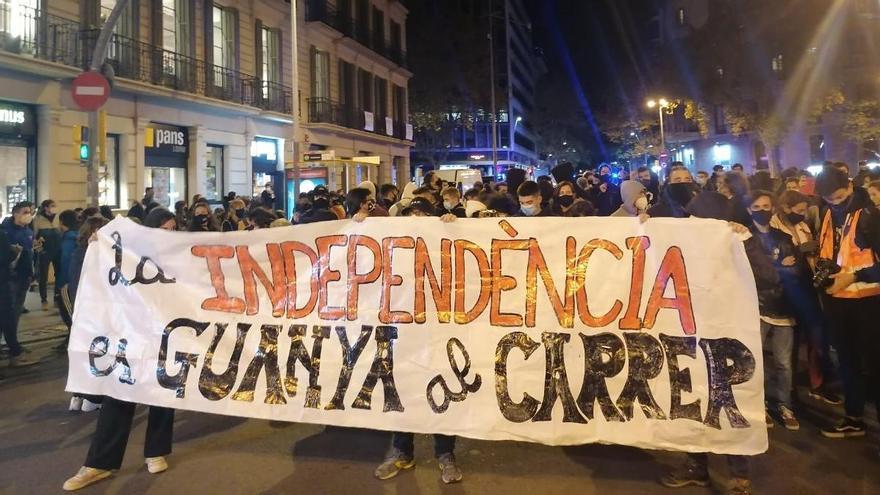 The first anniversary of the judgment of the Supreme Court process has been an example of how much things can change in just 365 days. On October 14 of last year, after the ruling that condemned the sovereign leaders to sentences of up to 13 years in prison was known, thousands of people took to the streets throughout Catalonia in what would be the beginning of a week of unprecedented protests in the years of the procés. This Wednesday the only protest has been carried out by the CDRs in Barcelona and has gathered about 200 people.

The day the Generalitat has ordered the closure of bars and restaurants, the protesters have ignored all sanitary restrictions and have marched through the city center in groups, many without masks, drinking beer and not respecting distances despite the prohibition of meetings of more than six people.

From the riot vans, the Mossos d’Esquadra have issued several notices that social gatherings are prohibited, to no avail.

As has been happening in the last pro-independence mobilizations, attendance at this Wednesday’s march has been reduced, in contrast to the abundant media and police presence.

There is no doubt that the pandemic, unimaginable in October last year, is responsible for the loss of the main asset of the independence movement, social mobilization. But already in the last Diada several protesters pointed out that, apart from the virus, fed up with sovereign leaders took away their desire to go out on the street.

The protesters have gathered in Urquinaona Square, the epicenter of a pitched battle that for more than four hours led groups of young people against the Police and Mossos on October 18 of last year, and they have gone down Via Laietana, where some protesters have withdrawn the Spanish flags that Spanish protesters placed last Monday.

Altogether, the week of protests last year resulted in almost 200 detainees, already released awaiting trial, while a score of agents are being investigated by the judges for malpractice in containing the protests.

The Urquinaona riots and the occupation of the accesses to the El Prat Airport at the behest of the now inactive Democratic Tsunami have become almost a symbol for the most drastic sector of the independence movement, which demands from politicians an unambiguous return to the unilateral path, something that at the moment is not in the plans of the main parties.

Neither the sentence nor the protests of last year were the assembly intended by the then president, Quim Torra, to reunite the independence movement. A year later Torra is disqualified and outside the Palau de la Generalitat and the independence movement will attend the February elections more divided than ever after the successive splits of what had once been Convergència.

The More Plural Platform launches a campaign against the Celaá law