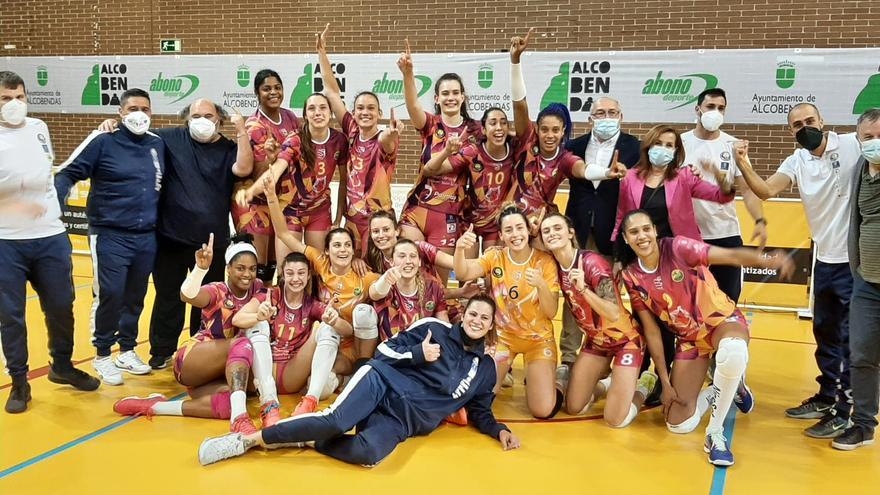 The Olympic CV makes history. His first team, the CCO 7 Palmas, it was proclaimed this Sunday champion of the Iberdrola Women’s Volleyball League, the first wound of the historic club in the elite. And this arrived in a big way, with victory in the Alcobendas fiefdom in the new ‘golden set’ that the winner of the series ruled.

Those of Pascual Saurín did not enter the game well and paid a little, although they recovered sensations for the decisive moment.

There, Saray Manzano threw his heart and character so that his team did not collapse despite the exchange of blows. The captain threw chevrons and the Gran Canaria team was better in the small details, which led them to make fewer mistakes and thus add a championship title that is now in history. Without a doubt, now it’s time to enjoy having fulfilled a dream.

An entire season was at stake in a single game. Feel Volley Alcobendas knew it, CV CCO 7 Palmas also and all the details were important. At the beginning of the clash, it was the Madrid women who came out more whole. Aware of their needs, Guillermo Gallardo’s players did damage to their defense-blocking and that gave them a great advantage (9-2).

The reception problems in the group led by Pascual Saurín did not help much to change a dynamic that was very much in favor of an Alcobendas that had come out with everything. Sofía Elízaga and Candela Alonso were in charge of imposing their criteria in a party with a clear capital tone. In this way, the set was aimed at ending up in the local pocket.

It was time to react. Saurín moved the bench in search of answers, but Feel Volley Alcobendas was very safe in the net. Even so, there was improvement on the part of the Gran Canaria and, although it took them two time-outs to react, the faces of the olimpilocas it was already different. And despite the fact that the set was left to the locals, the dynamics had completely changed (1-0).

Score with equality that was also on the local side

Alcobendas’ blocking-defense was once again decisive in a new start to the set, although this time CV CCO 7 Palmas was more involved in the crash. With that script, the Canary Islands only needed to get those feelings that being ahead on the scoreboard gives you. Despite this, the capital women clung to dominance while Saray Manzano came to the fore.

With the captain at the top, 7 Palmas kept looking for that extra point to finish turning the set. After much tug of war, in an exchange of points Alcobendas found the way again and with a partial of 0-4 they forced the islands to stop the set. He had to react again and Lucre Castellano appeared to give some air because those of Guillermo Gallardo put the very directive.

Again, Alcobendas was a little better than the islanders. The Olímpico lacked something more order and that another player, beyond Manzano, was warmed up. Therefore, the set also ended up in the hands of the locals (2-0).

We had to react and the CV CCO 7 Palmas came out better during the third set. Despite that good start, the crash was sufficiently even and Alcobendas replied. In this way, the Madrid women turned the set around and regained dominance. Once again it was very difficult for Saurín’s men to put their heads fully into the match and that left them a bit on the ropes.

Saray Manzano decided that she did not want to make it easy for Gallardo’s women and did everything she had to respond to the circumstances. The 7 Palmas grew with the passage of the set, fighting and sweating each point. They didn’t stop trying until the obligation turned into good feelings. The Olympian was at that time savoring his best version of the entire match.

Sulian Matienzo’s entry on the track also added to the group and the group from Gran Canaria was now where it wanted. Alcobendas threw everything to try to reengage, but the Olympic did not want, at all, to allow it (2-1).

Then came a key set. The final was at stake and all the points were important. The exchange of blows was the usual tonic of those moments. It was going to the gold set or winning the championship from the Canary Islands. The tension was noticeable in the environment, although the body language of the Saurín girls was different from that of the first two sets. Even so, Alcobendas did not yield anything.

In addition, the spectacularity in the points accompanied both teams to make anyone enjoy. With this panorama, each blow was answered and nobody managed to detach. This was also a symptom of the decisiveness of the moment. After a small partial from Gran Canaria, Alcobendas responded with more than just a slight difference in favor shortly after the end.

A great version of the Alcobendense painting appeared again and it was time to row again. In those Saray Manzano went on and on giving her team everything it needed, although Alcobendas remained strong and took the set to open wide a full-blown sudden death: The Golden Set (3-1).

The Olympian lands on Olympus

The first two shots were from Alcobendas, who came with the positive inertia of the previous set. However, the anger of CV CCO 7 Palmas equaled the contest. A partial 0-3 gave the olimpilocas a minimal advantage. From there, getting each point was a very tough battle and the exit of Lisa Arbos gave a pinch of oxygen although they were not yet ahead (8-7).

Alcobendas did not give an inch, but Saray Manzano and the Olímpico were not going to give up. Those of Pascual Saurín turned the Golden Set around with a great volley and left the Madrid women quite touched thanks, also, to the performance of a decisive Matienzo at that moment of the clash (11-14).

Despite this, the Madrid team forced the Canary Islands to request a time-out with a mini partial of 2-0, but this time, and with some suspense, the Olímpico did connect the key point that meant the first title of their story. This time, unlike the Cup, the coin fell on its side (15-13).

Sometimes dreams come true and, on this occasion, it was the turn of a CV CCO 7 Palmas that went from less to more during the season, who had to relish losing a final and now he has reaped the fruits of all his efforts. The Olímpico has already earned its place in the Olympus of Spanish volleyball.