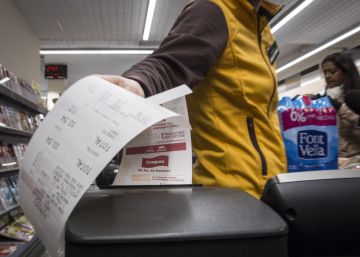 The chain of Catalan supermarkets Bon Preu will eliminate from the production of its purchase tickets a controversial chemical compound, bisphenol A (BPA), a substance considered by the European Union as toxic for the reproductive capacity, among other effects on health. The European Commission agreed to restrict its use in thermal paper – help to stick the letters, for example, in the purchase tickets – within the EU and set a deadline to implement the changes and implement the ban on use by 2020 Bon Preu has moved ahead of the restriction and, from April 1, his tickets will not have this compound.

BPA – present in 90% of the tickets that can be stored by a common individual at home, according to a study by the University of Granada – is included since 2017 in the list of substances "extremely worrisome" in the EU. That is, a level of concern similar to that of carcinogenic substances.

BPA is an endocrine disruptor. That is, it mimics the functioning of hormones and can cause endocrine and metabolic alterations. It is found, above all, in plastics to manufacture containers, in the linings of the cans of conserve or in the purchase receipts. "The tickets in the boxes are not polymerized. The white powder that comes out of your purse is pure BPA. It is known because if you bring a match to it, before the paper burns, it turns black, "says Dr. Nicolás Olea, from the Department of Radiology and Physical Medicine at the University of Granada. His is the article published in the magazine Environmental Research in which he states that nine out of 10 purchase tickets have BPA.

The European Food Safety Agency (EFSA, for its acronym in English) concluded in 2015 that bisphenol A is not dangerous to health, but not because it does not have toxic effects, but because the levels of medium exposure are not dangerous. "There is a low exposure, but constant throughout life," says Maribel Casas, a researcher at ISGlobal, a research center promoted by La Caixa. In 2011, its use in the manufacture of baby bottles was banned and in 2018 its presence was limited in cans for preserving children under three years of age. "The EFSA in its 2015 report only counted the diet. He did not look at the exhibition for other non-food sources. When you add other sources, you find what we tested in a study, that you urinate every day a few nanograms of bisphenol A. It is a very serious public health problem ", Olea ditch.

The experts consulted advocate making the "precautionary principle" prevail. "You can not bring to the market something that can have harmful effects on health," warns Casas. But in turn, they warn that there are substitutes for bisphenol A that can be just as harmful. "In 30% of the analyzed tickets of France there was bisphenol S (BPS), which is molecularly similar to BPA, but it is not regulated," warns Olea. Bon Preu has not specified which will be the substitute.

Several studies link BPA with the risk of developing diabetes, obesity or even neurological disorders. However, Casas clarifies, "the evidence is basically experimental." This implies that there is not so much solvency in the data when tested in humans, among other things because the systems to measure exposure are complex. "When BPA enters the body, you urinate in less than six hours. The concentration can be very variable depending on when you take the urine. What we are working on is improving the exposure measures and what the EU wants is to make new tests to better detect endocrine disruptors, "adds the researcher.

In France, the use of BPA in purchase tickets was banned in 2015. The EFSA is reassessing the public health risks related to the presence of BPA in food.