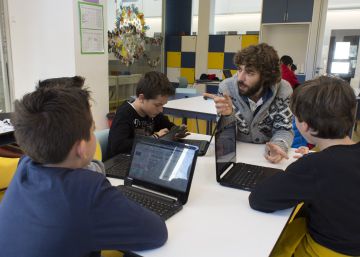 Catalonia has decided to stop the proliferation of ghetto schools, situation that occurs when the concentration level of students with low resources exceeds 50%. In March 2019, the Generalitat approved the Pact against School Segregation to ensure integration in all public and concerted centers, after the Catalan Ombudsman alerted in 2016 of the “high concentration of immigrant students with few resources” in a hundred schools – 4.35% of the existing 2,295, almost double that of 2006 – with more than 50% of foreign students. This Monday, when the deadline for submitting amendments to the new project ended, the employers of the concerted schools submitted more than 120,000 allegations to the Department of Education. They criticize that the measure “will limit the ability of families to choose a center.”

Among the 189 measures of the plan, the Generalitat contemplates a new decree of admissions for the schooling of the students of infantile, primary and secondary. Until now, the concerted school could adjust the number of places to the demand of the families, so that it could expand the number of groups by educational level, provided that the Administration approved it. With the new decree, it will be the new school fees that decide how many places each center will assume based on the needs of the neighborhood population. The objective is to “distribute the students in a balanced way”, to avoid that some centers are full and others at half capacity with the most disadvantaged students.

The European Commission, the Committee on the Rights of the Child or the UN have urged in recent years to Spain to review and approve policies that stop school segregation. This affects 46.8% of schools in the country – nine out of ten are public – according to the study Magnitude of school segregation by socioeconomic level, published in 2018 by two researchers from the Autonomous University of Madrid.

“Families with greater economic and cultural capital avoid certain centers for their children because of the type of students who attend, while the most disadvantaged tend to go to the school closest to their residence,” said Joan Cuevas, researcher of educational policies at the Jaume Bofill Foundation in reference to the conclusions of some of his studies. “The only way to stop segregation is the intervention of administrations in the registration process,” he adds. Catalonia is, with the Balearic Islands, autonomy with more foreign students, 13.2%.

Another novelty is that families will no longer go to schools to pre-register and enroll; they will do it in the municipal offices of schooling (in municipalities of more than 20,000 inhabitants). “School programming is a very powerful tool to avoid school segregation and increase the level of equity of the system,” said the general director of Family Care of the Generalitat, Juan José Falcó. In the 2016-2017 academic year, 67% of primary school students and 62% of secondary school students enrolled in public centers.

The employers of the concerted, which in March 2019 signed the pact against segregation – signed by the Generalitat, social agents, the Catalan Ombudsman, associations of families and employers – are not satisfied with the way in which the decree. In the allegations, they denounce that the new regulations change the criteria for school programming and that this can “negatively affect” their centers and the freedom of families to choose where they want to enroll their children. “This is done because the LEC (the Catalan educational law passed in 2009) establishes that for school programming you have to have social demand,” explains Josep Manuel Prat, president of the Federation of Associations of Parents of Schools Free of Catalonia (Fapel).

The draft decree foresees that the programming is done before pre-registration: based on the register of each zone, the department will decide how many groups correspond to each center. “If you don’t offer all the groups that were in the previous course, you limit the family’s ability to choose,” says Prat. Families will still be able to express their preferences and pre-enroll students in specific centers, provided there are places.

The four large employers of the concerted school, which also submitted allegations together, also denounce that altering the offer in advance may “impair the maintenance of jobs in the centers agreed upon,” as the salary of teachers is linked to the number of groups. “If you close one, the center has to fire or integrate it, thus increasing the cost for families,” explains Agustí Guillén, of the Catalan Federation of Teaching Centers.

In this sense, the concerted schools also denounce in the allegations that the decree does not propose solutions to the “under-financing” of the centers, nor does it foresee increasing economic compensation for including students with specific educational needs. “The decree does not ensure sufficient funding to educate students,” said Maria del Mar Pla, secretary of the Christian Confederation of Parents of Students of Catalonia, at the time of delivery of allegations. “Compensatory policies are mandatory , and they must be clearly defined and guaranteed, “the signatories affirm in the allegations.

Teaching admits that the decree will not be able to enter into force during the pre-registration period for the next course, and they hope to approve it for the enrollment period. “They wanted to do it quickly and running,” laments Prat, who recalls that there were only seven business days to file allegations. “The Pact against Segregation wants the improvement of all students in Catalonia, but if we do not have resources, what we do is a paripé,” he concludes.