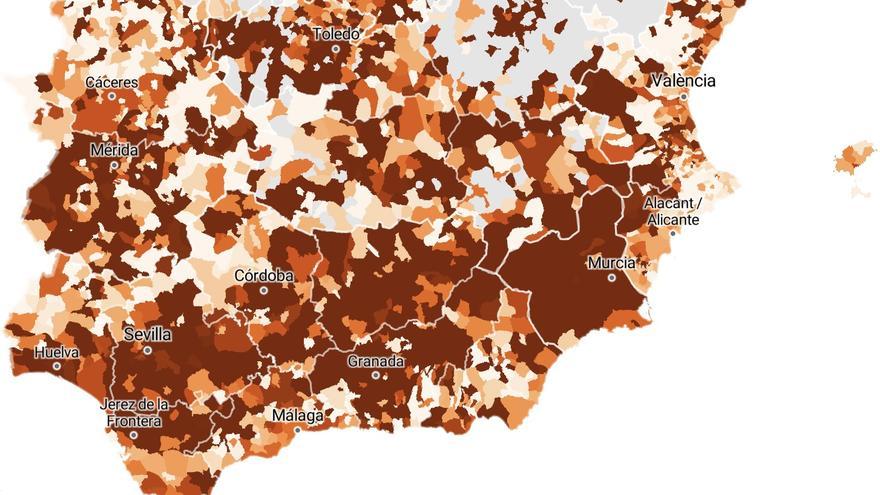 The second wave of the pandemic, although it continues to hit much of the peninsula with force, has given a little respite in the last week. There are only five Spanish capitals that exceed 1,000 cases per 100,000 inhabitants in the last 14 days, with one of them, Burgos, above 1,800, according to the analysis carried out by elDiario.es based on data from the Health Councils of 16 autonomous communities and the cities of Ceuta and Melilla. In addition to Burgos, Cuenca, Zamora, Granada and Valladolid are the capitals that exceed four figures in the incidence rate and all of them are located in the first 10 positions in the ranking of large cities with the highest number of infections per inhabitant in the last two weeks.

16 million Spaniards reside in municipalities with an incidence of more than 500 cases per 100,000 inhabitants, double the rate that the Ministry of Health describes as “very high” risk. Five million live in localities that exceed 800 cases of incidence. However, this figure has dropped in the last week where in many municipalities the decline in infections is already beginning to be felt in many communities: a week ago, there were 19 million people living in municipalities with incidents of more than 500.

Since the arrival of autumn, the classification of cities with more than 40,000 inhabitants that register the most infections has undergone a major shift: from being dominated by the Community of Madrid in its entirety to being distributed by Castilla-La Mancha, Castilla y León, Andalusia and Catalunya, which in recent weeks took the top positions and already only has two cities among the top 25 places.

The map shows the numbers of confirmed cases of COVID-19 in each municipality of the autonomous communities that have published their data of infected in each locality. To date, the following communities are included: Community of Madrid, Euskadi, Catalunya, Cantabria, Canarias, Murcia, Asturias, Baleares, Andalucía, La Rioja, Comunidad Valenciana, Navarra, Extremadura and Castilla-La Mancha, which are the ones that have published their figures. Castilla-La Mancha, Extremadura only include confirmed cases in recent weeks and do not publish their accumulated data since the beginning of the epidemic. In addition, this medium has included the confirmed cases of the most populated localities of Aragon and Castilla y León in the last 14 days, which also do not publish the accumulated cases by municipality.

The data for each municipality show the same variable: the number of people who have tested positive for coronavirus and their place of residence has been identified. For some communities the data of positives by PCR test, antigen test and rapid antibody test are included. Madrid, the Balearic Islands, La Rioja, Navarra, Extremadura, Castilla y León, Murcia and the Valencian Community only publish the data from the PCR / Ag + analytics. With the change in protocol, some communities are beginning to enter cases confirmed by antigen test but do not break it down separately from PCR.

In total, the figures collected add up to more than one million cases of coronavirus in which the municipality of residence of the infected person has been identified. Of the 16 autonomies analyzed, Madrid is the city with the most infected detected in a single municipality. However, the municipalities with the highest incidence rate (cases per 100,000 inhabitants) are small localities in which an outbreak can affect a larger proportion of the population.

It must be taken into account that the number of cases is closely related to the ability to detect them by health authorities. That is, the more tests or analyzes performed, the more cases detected. How many confirmed cases are there in each municipality? Check it out in the following table.

Balearics, according to this last minute information, refused at first to share his data, although in the end he has published it. Extremadura, under the same criteria, has only referred to this medium the cases in the 8 most populated municipalities in the region. Castilla y León is only publishing its figures by health areas and eldiario.es has only included the cases confirmed by PCR from the basic areas that group a single municipality.

If you are responsible for data in an autonomous community and your figures are not included in this map, you can write an email to [email protected]

The Community of Madrid published its reports every 24 hours and now it does so every week. The Generalitat de Catalunya updates its data several times a day but at different times each day. The figures for Cantabria are modified every day, including cases notified until 12 in the morning.

Most communities have changed their formats and times for updating the figures as the epidemic progresses.

In the cases of Extremadura, Navarra and Castilla y León, the figures for the less populated municipalities have not been included since they have not been obtained from the regional administrations.

Castilla-La Mancha reports since the last week of September of the municipalities with more than 500 inhabitants -before it did only with those with 1,000- and does not publish the accumulated total. It only makes public the confirmed cases in the last two weeks without specifying the type of test carried out or further details.