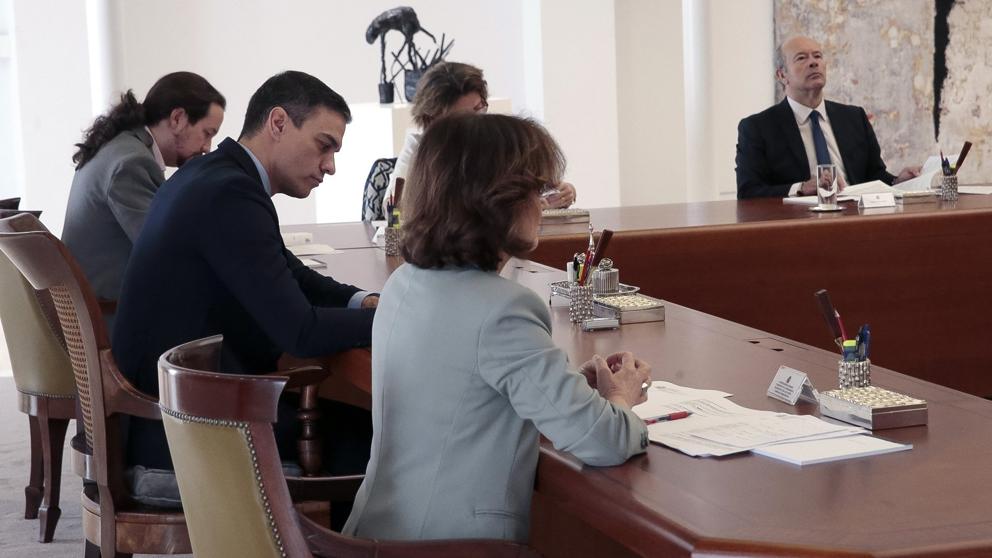 The hospitalization of Carmen Calvo in the afternoon of last Sunday, affected by a respiratory infection and that ended up testing positive for coronavirus
, opened a debate in the Moncloa and the PSOE that the first vice-president of the Government, however, settled yesterday. “This morning I was discharged from hospital,” she announced herself. The medical team that has treated me for Covid-19 considers that the evolution of my state is positive and does not need to maintain my hospitalization. I will continue medical treatment at home, maintaining isolation. ” Also from her home, and despite the quarantine, the vice president will maintain all her functions telematically, according to her team.

Calvo will preside, as always, the next meeting of the general commission of secretaries of state and undersecretaries that, according to government sources, will be held predictably next Monday to decide what issues and measures are raised to the table of the Minister council Tuesday. At a time, moreover, when the tensions between various ministries are still very much alive due to the measures to be applied to double the pulse of the virus and palliate their serious health, economic, labor and social effects. And in which the ministers of United We Can They maintain their pressure to expand the social and economic shield deployed and even strengthen citizen confinement.

On the days when Calvo was hospitalized, there was a debate about the implications that his absence could have. And it raised, in any case, concerns in socialist sectors about the role that could be played by the second vice president of the Government, and leader of United We Can, Pablo Iglesias. A debate that is now parked after Calvo’s hospital discharge, but which shows that the fight for the balance of power between the PSOE and UP within the coalition remains latent.

Meanwhile, the pandemic continues to spread to members of the Government after the positives of the ministers Irene Montero and Carolina Darias, who are still being held in their homes. The wife of the Prime Minister, Begoña Gómez, tested positive for the coronavirus, so the concern that was generated in the PSOE is what would happen if Pedro Sánchez was also finally infected and his first vice president was out of action, before the possibility that Pablo Iglesias would have to assume, even temporarily, the reins of the entire Executive.

According to Moncloa sources, the Secretary General of the Presidency, Félix Bolaños, began to evaluate the possibility that Calvo should be replaced, who in his capacity as Minister of the Presidency is in charge of the commission of secretaries of state and undersecretaries prepared by the Council of Ministers. The different interpretations regarding the Government law of 1997 opened the possibility that Pablo Iglesias could assume the position, although other sources pointed out that this function could fall to the Minister of Foreign Affairs, Arancha González-Laya, due to the “ order of precedence of the ministerial departments ”that the law dictates, since its portfolio is the oldest of the Executive. Other Moncloa sources even pointed to the possibility that the chosen one was one of the four members of the board appointed by Sánchez during the state of alarm – that is, the ministers Salvador Illa, Margarita Robles, Fernando Grande-Marlaska or José Luis Ábalos -, since all the meetings of the Council of Ministers have, at the moment, a “monographic” character.

The possibility that the leader of Unidas Podemos could take command of the commission of undersecretaries generated mixed positions among the Socialists. Some thought that it would be nonsense for Sánchez to leave the Ministry of the Presidency and control of a good part of the State’s springs to Iglesias, although others assumed it: “No problem, he is a responsible person.”

Although Calvo’s decision to continue at the forefront of all his functions, by telematic means, ended this debate. And it did bring relief, yes, in some socialist sectors: “It does good, less harm.” In the team of the first vice president, they highlight that Calvo will chair the commission of undersecretaries by videoconference on Monday without any problem: “He did it this way last Friday”, they reveal, because in Moncloa precautions are also being taken to avoid more infections

The measure also reassures some socialist leaders that, although Sánchez was infected and was confined to his residence in Moncloa, he could maintain all the functions of his office and also preside over the Council of Ministers by videoconference. “Of course it can, everything except the regulated acts of Congress,” they say.