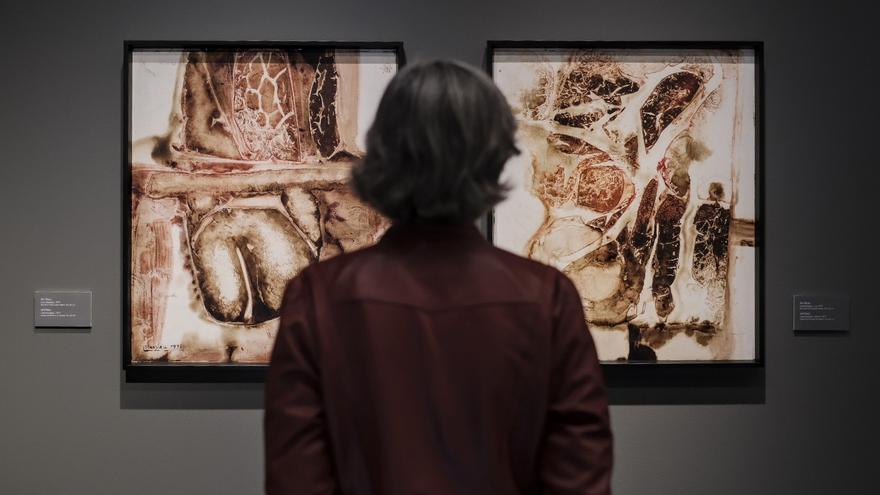 The Casa de Colón exhibits a representative sample of the works of the Gran Canaria artist Lola Massieu (1921-2007), on the occasion of the centenary of her birth on March 10, and links her plastic universe with two other artists, Yolanda Graziani and Pino Ojeda, with the purpose of claiming, from a gender perspective, the important role that these women occupied as creators in the avant-garde of the 20th century in the Canary Islands.

The exhibition called ‘Pioneras. Lola Massieu and her contemporaries Yolanda Graziani and Pino Ojeda, in the collection of the Casa de Colón ‘, framed in the’ March-Woman ‘program promoted by the Ministry of Culture of the Cabildo Gran Canaria, can now be visited for free in the aforementioned museum Americanista until April 4, Monday to Friday from 10:00 a.m. to 9:00 p.m., Saturdays from 10:00 a.m. to 6:00 p.m. and Sundays and holidays from 10:00 a.m. to 3:00 p.m.

The 17 works on display, which are part of the Casa de Colón collection, have in common the strong energy of their colors and the use of landscape, nature and its forms, which become blots, straight lines, colored spots , which are tearing and melting, become liquid to find themselves in the abstraction of the canvas.

Although it is true that their artistic concerns made that, throughout their lives, painting was not their only means of expression, the exhibition focuses solely on the pictorial facet of these three artists. It is about paying tribute to three extraordinary female figures of Canarian art, whose works indisputably enriched the cultural panorama of the islands.

The use of tars, resins and varnishes in the works of Lola Massieu materialize the abstract concepts of space, volume and time, maintaining a tense balance between order and chaos in creation. In turn, the lacquers by Pino Ojeda and Yolanda Graziani transform color into glazes, into transparencies that allude to water, air, also in vibrant colors, which express emotions or enhance elements such as stone or lava.

The interior spaces are also reflected in his fabrics: the dream world, dreams, passions, misfortunes, turn red, ocher, turn gray, white and turn black, used many times, not as an absence of color, but as its protagonist.

His artistic innovation and the effort to show his creations from abstraction, made them generational references and precursors of social changes in the face of the difficulties of the time.

With this exhibition, the Casa de Colón renews its commitment, framed in the rigorous work that the Insular Service of Museums carries out, regarding the search, promotion and dissemination of real equality, organizing activities in the month of March and throughout the year that make women and their roles visible throughout History, in Culture in general, and in Art, Literature, Music or Cinema in particular.

For this reason, the agenda of ‘Marzo-Mujer’ includes this tribute exhibition, a conference on the work of the centennial artist and a workshop for families to get closer to the trajectory and legacy of the three creators.

This exhibition, which has Lola Massieu as its backbone, aims to make the artists visible, since the domination of the authority of patriarchal values ​​has been imposed throughout history, in such a way that it has made the role of women in cultural creation. The artists have not stopped producing their work over time, but until well into the twentieth century they always did it as a pampered entertainment and in the shadow of some man, in the domestic and family sphere.

During the Civil War and the Franco dictatorship, the active participation of women in cultural life was largely curtailed, but the nonconformity and the desire for creative freedom that characterized the social climate of the last years of the regime and the beginnings of Democracy promoted the slow and progressive access of the creators to the artistic world.

In the specific case of Gran Canaria and within the framework of women’s access to training, the Municipal Academies started by Abraham Cárdenes and the Luján Pérez School acquired great relevance as laboratories for contemporary island art.

This fact caused the flourishing of a less academic type of education, in which the observation of reality and information on the various trends of the time were the referents to follow, causing the progressive annexation of the artists, in an active way, to the avant-garde groups that emerged in the mid-20th century on the islands, either as founders or as members of these.

Lola Massieu was born into a wealthy family and began artistic training with her uncle Nicolás Massieu y Matos. Drawing and repetition were the basis of his learning, until in 1940 he began to produce his first oil paintings with the representation of still lifes, portraits and landscapes. However, his visits to the Luján Pérez School and his contact with Felo Monzón influenced the change that his creative process underwent and the importance that color acquired in his work.

In 1958 he inaugurated his first solo exhibition at El Museo Canario, with few figurative references and showing his expressionist stamp, becoming a forerunner of contemporary painting in the Canary Islands in the midst of a universe dominated by men. In 1990 he was awarded the Canary Islands Prize for Fine Arts and Interpretation. She was the first woman to receive it and, so far, the only plastic artist.

This cosmos was also conquered by Pino Ojeda (1916-2002) who combined, throughout his career, the literary and artistic aspects. A student at the Luján Pérez School and the Municipal Academies of the city of Las Palmas, she exhibited nationally and internationally and also stood out as the first woman to found an art gallery on the islands.

This was the context in which Lola Massieu and Pino Ojeda founded, in 1961, together with other artists such as the aforementioned Felo Monzón, Rafaely Bethencourt and Francisco Lezcano, the Espacio Group that, also born within the Luján Pérez School, claimed the abstract art as an antithesis to the fatigue of official aesthetic dictates and figurative art, to give way to a nascent plastic adventure.

The ideological credentials of the Espacio Group were disclosed in the form of a manifesto in the Gran Canaria magazine Mujeres en la Isla, a monthly literary-feminine magazine that was directed and written, practically in its entirety, by women, and that was destined to the dissemination of articles of cultural criticism, in whose content the mentions to the work of Lola Massieu, Pino Ojeda and Yolanda Graziani occupied several pages.

The latter, Yolanda Graziani (1926), who will receive this year the Can de Artes del Cabildo de Gran Canaria, felt a vocation for painting from a very young age, which led her to study the great masters in a self-taught way and to experiment with new techniques. . He conquered milestones such as the first Prize at the X Regional Biennial of Fine Arts of Las Palmas de Gran Canaria (1962) and held his first solo exhibition the following year. It was from this moment that he took off with his participation in group or solo exhibitions in different parts of the European geography (Madrid, Florence, Venice, Barcelona and Stockholm), until he received criticism from artists of international stature such as Salvador Dalí.