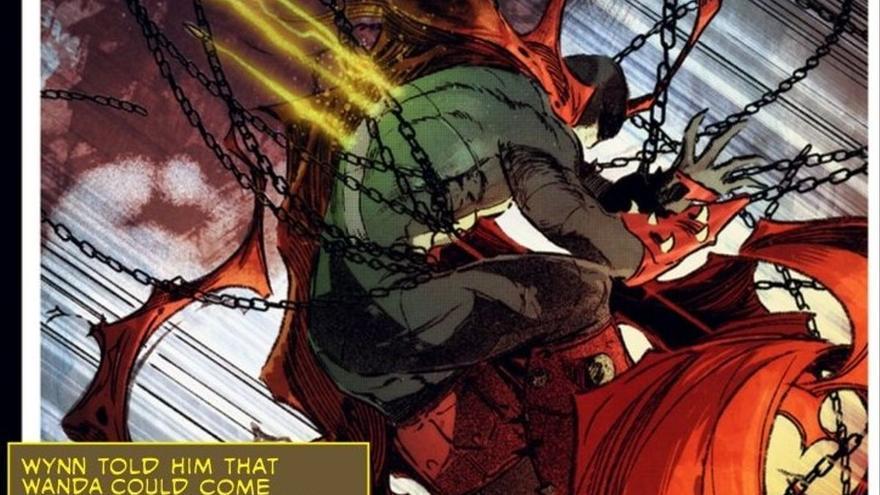 Todd McFarlane became a star in the 90s drawing Spiderman, the star character of Marvel. Dissatisfied with the way the publisher treated him, he gathered other top cartoonists and founded the Image Comics publishing house. From there, he became a millionaire, created an emporium based on the comics of a character devised by him, spawn, and an action figure company called McFarlane Toys. Todd McFarlane was a good cartoonist but, above all, he is an excellent businessman. That is why he has gone from living in a trailer to owning one of the largest collections of baseball memorabilia in the US, owning one of the corsets that Jean Paul Gaultier designed for madonnaor the uniform that the diva wore in They deliver the blow.

Todd McFarlane's latest coup has been to revive Spawn, his infernal hero whose regular monthly series reached number 300 in 2019. Although he has not personally been in charge of drawing or writing the character for a long time, the proximity of this round number made him see the possibility of reactivate the life of a franchise that has a loyal public in the United States and constant. This is how the possibility arose in 2021 of premiering the first series parallel to the main one, King Spawnwith script of Sean Lewis and drawing of Spanish Javier Fernandez.

number one of King Spawn was the comic books (the superhero comic of all life, with 24 pages and stapled spine) best-selling in the United States in 2021, with nearly half a million units sold. A spectacular figure if we take into account that the format is in sharp decline compared to manga and hardcover or softcover volumes, that a normal number of the regular series of Hombre de Hierro or the Captain America is around 30,000 copies, and that the best numbers of best sellers such as Amazing Spiderman or X Men they had to settle for half.

The overwhelming success of King Spawn in a declining format such as the comic books and with a character outside the two large multimedia companies that are Marvel and DC It resides in the ambition and commercial flair of Todd McFarlane, but also, to a great extent, in the work of the Spanish cartoonist Javi Fernández.

Draw as a family

Javier Fernandez, Javi for friends and acquaintances, shares a name and surname with the Olympic figure skater, but has chiseled his singularity through hard work. Born in Olona of Montserrat (Barcelona) in 1981, tells from his home in grenadewhere he has lived for years, how King Spawn it was one of the many bets he has made throughout his life. "I didn't know what I was going to do. King Spawn”, he confesses. “He had been renewing consecutive contracts with DC Comicshad worked in Detective Comics (main header of Batman), Green Arrow… I had done many titles and I wasn't entirely happy, I wanted to do something different”. Fernández, with the security of an exclusive contract at that time with a publishing house, remembers the definitive moment: "my contract ended in December, and in the summer I received a message from Todd McFarlane to see if I wanted to do something with him and with Spawn; I thought I was going to do the regular series, he didn't give me many details."

The overwhelming success of that title has not changed, however, the day to day of the Catalan cartoonist in the city where he lives, grenadewhere he lives with two great star cartoonists of superhero comics: Belen Ortegayour partner, and Jorge Jimenez, friend and former classmate. The three of them continue to walk in total tranquility around the Nasrid city when they can because, as the Catalan recalls, “I work from Monday to Sunday. I try to have fewer hours on weekends, but if there is delivery, it cannot be done. The success of King Spawn It is a great joy, but my day to day does not vary much. I have the feeling that this happens to another Javi, the everyday Javi has to work long hours”.

Not everything was always so simple: the cartoonist remembers how he left some automotive studies that did not convince him and five years of work in construction, in the golden age of brick. "I earned a lot of money and bought a flat, but I didn't see myself living like that," she says. His first bet was to study drawing in Barcelona. The second, which he defines as "the best decision of my life", moving to Granada, without having anything or anyone, to live in an apartment belonging to his maternal family and focus on drawing. He ended up sharing a studio with local cartoonists like Jorge Jiménez and Javier Aranda and, in his own words, that changed his career.

I didn't grow up between comics, my house was never one of those where there were Asterix albums "

Fernández admits that he was late to the comic. "I did not grow up between comics, my house was never one of those where there were albums of Asterix", remember. “My brother drew very well and I wanted to emulate him. At the age of fifteen he gave me the first comic, which was one of spawn and cyberforce, And that's when I got hooked." The cartoonist says he does not have a special predilection for superheroes. “I love the medium, I love storytelling, sequential storytelling. If you don't have a superhero or manga culture and what you like is narrating, you can do anything, which is what I've done”, he highlights. Before making the leap to the United States, he got fired reviving the header war feats in Spain or drawing a biography of Amy Winehouse for the French market, an ecosystem that attracts you a lot.

David Lopez he is a veteran among cartoonists working for the US market. Throughout his almost three decades of career, he has drawn and draws some of the most outstanding stories of characters such as the Captain Marvel, cat woman or the X Mena task that he combines with Blackhand Ironhead, an international series that was initially published in digital format. He has also mentored many other cartoonists and continues to do so through his YouTube channel. Youtube Streaming cartoonists, which he shares with his colleague David Lafuente. López considers that Javi Fernández is, today, one of the most outstanding cartoonists, because he "does not focus on leaving beautiful drawings, but on that there are comic pages that fulfill their function, which is to tell a story". "It does a very difficult thing," he adds, "which is to give a visual texture, so that its images are always recognizable and work beyond words." The cartoonist points out how “you can see a page of Javi Fernández at the size of a stamp and you can still read it. That is very difficult”.

All this artistic worth was measured, however, alongside one of the names most revered by North American readers over the last three decades, in a market in which, even today, readers continue to regard foreign cartoonists with some suspicion. . Todd McFarlane also drags the legend of being an excessive and tongue-tied character. "Before I started working with him I also had my prejudices, which were totally artificial because I didn't know him at all," says Fernández about him. "I didn't know if he was going to be very picky or if he was going to tie me down short, but then he is very collaborative and very close," he clarifies.

In today's comic book world, there's a certain sense that the character belongs to the writer, a certain volatility"

The author acknowledges enjoying a "very one-on-one" working relationship. "Every time we start a new story arc they ask me what I want to draw," he says, admitting how "in today's comic book world there's a certain sense that the character belongs to the writer, a certain volatility. Unless you have a very good feeling with the writer, you are relegated to 'take this script and draw it', which is very cold." His experience, on the other hand, is totally different: “I like to think that between Todd MacFarlane, Sean Lewis (the screenwriter) and I are building something, we agree that we would like to mark an era with the character”.

Something, by the way, that the disseminator does not see anything crazy Agustin Lopez Avilesbetter known as BAMF!responsible for the popular YouTube channel and Twitter Comic Freaks and one of the most lucid experts and analysts of current American comics. “Javi Fernandez was born to do spawn, because he has a style that already in the superheroic that he had been doing focused on the city, the building, the dirty sky, the shadow and in a plot game that is so spectacular that the rest of the Spanish artists ask him for advice, "he says. the divulger. "He's doing a comic mainstream for the US, which is giving a lot of play in the pages, and achieves things from a technical point of view that go beyond what a standard cartoonist would do. You see a page of his raw and it's amazing, ”he concludes.

BAMF! defines King Spawn as "an ambitious series that has a very interesting thing: it is telling a shared universe with many characters of its creation, just like Marvel or DC". The youtuber understands the great success of the series because “it is a comic very much for an American reader, there is a very action movie reel that works very well there and here in Spain perhaps not so much”. The Spanish publisher of spawnPlaneta Cómic, values ​​the figures of King Spawnbut still has no date for its Spanish edition. Fans, for the time being, will have to import the original edition.

Javi Fernández is clear that he wants his path to run parallel to spawn in the near future, “the character aesthetically catches my attention, I had been dragging a certain artistic dissatisfaction and the creative freedom that I have with King Spawn meets my expectations."

Friendly and warm on the other end of the phone from his home in Granada, the cartoonist speeds up the conversation before sitting down again in front of the drawing table: “This comic books It's like constantly riding a bike. If you don't pedal, your bike will stop”, he adds.