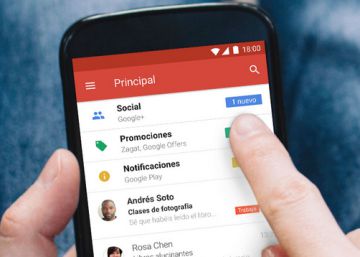 How many unnecessary emails do you send throughout the day? Do you usually send messages with a simple "thank you", a "received" or a "have a good weekend"? Dispense with these types of messages, although at first glance it may seem impolite, it reduces our ecological footprint. This concludes an investigation carried out by the energy company Ovo After analyzing the impact of the 64 million unnecessary emails sent daily by the citizens of the United Kingdom.

The number of emails sent and received daily throughout the world has not stopped growing since 2014, according to Statista. If 196.3 billion were sent in that year, it is expected that in 2019 the figure reaches 236,500 million. Each of these messages pollutes, so thinking twice before sending them can help save the planet. “When we send an email, energy is required to power the data centers and the computers and devices that then send, filter, read and deliver emails,” explain sources from the company that developed the study. All these devices and the Internet require energy and emit carbon dioxide.

British users send an average of 11.29 unnecessary emails a week, according to a Censuswide study cited by Ovo. If each of them did not give up just one of those messages, 16,433 tons of carbon dioxide would cease to be emitted within one year. The researchers say it would be the equivalent of removing 3,334 gasoline cars from circulation or eliminating 81,152 flights between London and Madrid.

If users in the United Kingdom left without sending an unnecessary email a day, it would be equivalent to withdrawing 3,334 gasoline cars from circulation or eliminating 81,152 flights between London and Madrid

"The survey we did was conducted using a nationally representative sample from the United Kingdom only, but it could generate some indicative figures for Spain and other countries," company sources explain. The data used to carry out the study have been taken from the book How bad are bananas? The carbon footprint of everything. Its author, Mike Berners-Lee, who is Professor at the Lancaster University Environment Center and brother of the inventor of the World Wide Web, Tim Berners-Lee, has advised Ovo for research. To calculate the environmental impact of sending a short email without attachments in Spain, "it would be good to use a gram of carbon dioxide as approximate."

"Thank you", "have a good weekend", "received", "have you seen this", "greetings" or "LOL" are among the expendable messages sent more frequently. Nearly half of Britons acknowledge sending unnecessary emails to a colleague or friend within walking distance every day: “We are not suggesting that all emails be avoided, only really unnecessary ones. For example, if you send a thank you email to someone who is only three meters from you in the office, it is better to stand up and tell them in person. ” Seven out of ten Britons would not mind not receiving an email of thanks if they knew it benefits the environment.

This is not the first study that addresses the contamination of emails. A 2017 report from the consultancy Two Sides concludes that the activity linked to emails around the world could amount to the carbon footprint produced by 890 million cars. This figure depends on the size of the emails sent. Berners-Lee explains in his book that if an email has an attachment of, for example, 1 MB, the carbon dioxide generated amounts to 19 grams and if that attachment is forwarded or archived, the imprint of that email could reach 50 grams, according to the newspaper The Independent

Apart from sending emails, others Digital activities also pollute. "Everything, even a text message has a carbon footprint!" For example, WhatsApp messages, the use of cloud services such as Netflix or the arrival of the Internet of Things contribute to the global emission of greenhouse gases. Users can take small steps to reduce the impact: “If you turn off your large appliances, such as the TV, when you go to bed at night and make sure you don't let the devices stay connected when they are fully charged, you can reduce your consumption of energy and, therefore, your carbon footprint. ”

Carbon is the result of almost all actions, even the smallest

The ultimate goal of this study is to highlight "that carbon is the result of almost all the actions we take, including minor actions such as sending an email": "Once people realize that, a new level opens of conversation on how to make bigger changes to reduce the carbon footprint. ”

The concentration in the atmosphere of the main greenhouse gases He set a new record during 2018. The World Meteorological Organization warns that the concentration of carbon dioxide has been the highest for three million years. From the moment a citizen travels by car, puts the heating on or opts for packaged food, leaves a carbon footprint on the planet: “If we were all a little more considerate of our actions, making small changes in our day-to-day life , together we could do a great job to help reduce the effects of carbon emissions. ”

Carme Artigas, the guru of the digital transition