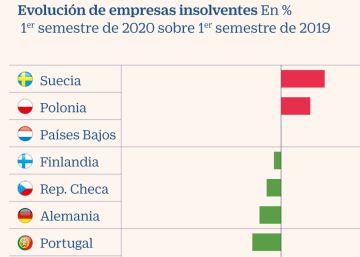 Spanish companies will need an additional 90,000 million to public aid programs to recover from the impact of Covid-19. This is reflected in the report ‘Recapitalization of EU companies after Covid-19’, prepared by the Association of Financial Markets in Europe (AFME) and PwC, which anticipates a wave of corporate bankruptcies since the beginning of the year.

Although the report does not detail specific data by country, estimates from AFME and PwC place at 155,000 million euros the impact of the pandemic on the Spanish business fabric, 15.5% of the estimated total of € 1 billion for all EU companies. Taking these data into account, domestic companies will need the aforementioned 90,000 million additional capital. This impact would fundamentally affect small and medium-sized companies (SMEs), since they represent 98% of the Spanish business fabric.

In any event, AFME and PwC qualify these figures by explaining that right now it is not possible to quantify in more detail the need for capital in Spain, once the public and private aid plans that have already been approved have been discounted, because the distribution of important public programs to support companies.

As far as the European Union (EU) is concerned, companies from the 27 member states face a gap of up to 600 billion between the capital needed to recover from the impact of the virus and that obtained through public and private support programs to inject liquidity into companies.

And the fact is that the recovery plans will only cover around 50% of the damage caused by the virus in the business fabric of the EU. The document reveals that despite the aid packages already in place, these will only mobilize between 400,000 and 550,000 million euros of the capital necessary to avoid widespread commercial breaches and job losses. This represents a capital deficit of up to € 600 billion that threatens the EU’s economic recovery.

Despite the start of vaccination programs in Europe, the third wave and the spread of the pandemic for a time that is dragging on longer than expected may drag down the economic recovery of companies in Europe. The report points out that the limitations that companies are having to operate normally due to the measures to contain the wave of new infections and the extended term for public health improvements, will have a significant impact on the viability of many companies that can be considered as financially vulnerable.

In this sense, AFME and PwC detail that around the 10% of EU companies have the capital to last between two and six months at normal spending rates and may need to rely on increased government intervention (some of which will follow soon).

According to the statistics offered by the report, in the 27 countries of the EU, in a generalized way in the first half of 2020, there was a drop in the number of companies that went bankrupt, compared to the same period in 2019. However, warn that the current low number of insolvencies in the EU hides the fragile health of companiesas many member states have temporarily introduced not only financial support from the public sector, but also changes to the insolvency regime to prevent companies from going bankrupt.

Furthermore, he adds that this fragility will surface as financial pressures mount in 2021, and for this reason AFME and PwC expect that insolvencies will increase when the time comes to liquidate the loan schemes, tax holidays and cease other support measures still in force. Therefore, the report concludes that unless urgent measures are taken, a wave of insolvencies could begin to occur starting this month.

The document explains that so far debt has largely provided the lifeline companies, but recapitalization is needed to accelerate their recovery. Along these lines, it proposes that the authorities explore and develop more short-term measures to support the European hybrid and equity markets. To do so, it calls for a new EU-wide hybrid instrument designed specifically for the business sector.

It also proposes expanding existing recovery support systems throughout the EU, such as the EIF’s European Guarantee Fund, adapted to the needs of SMEs, particularly those that are smaller, or exploring greater use of innovative instruments, such as actions dual-class approach to address corporate control concerns, as well as swaps equity to reduce leverage.