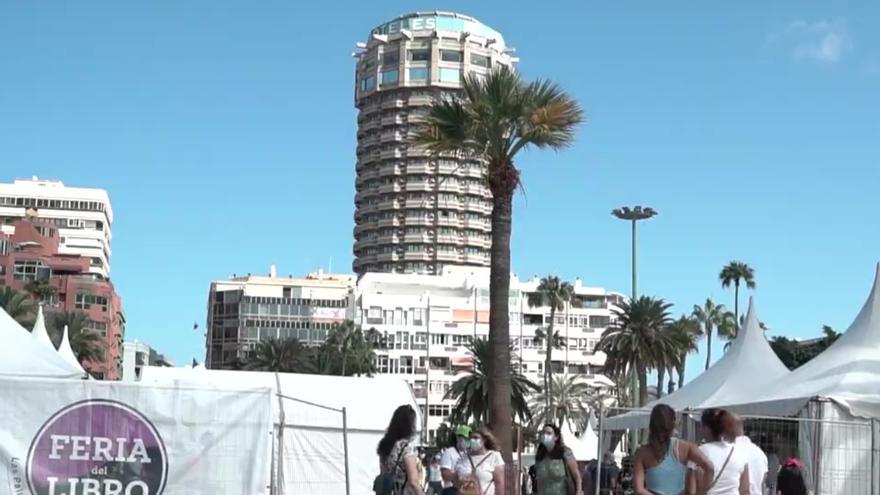 The Book Fair of Las Palmas de Gran Canaria has closed its doors turned into a celebration for reading thanks to the desire of the public to return to enjoy cultural events such as the one offered in the Santa Catalina Park and the Elder Museum, as well as taking advantage of the incentive of meet your favorite writers, get a signature, and take home books to learn and fly with.

“It has been like six days of festivities, instead of a fair it has seemed like a festival,” says José Gilberto Moreno, director of the Elder Museum, home to two of the presentation spaces, that of General Literature and Youth Literature, where he was able to check the traffic day after day, and also in the Santa Catalina Park, which hosted children’s presentations, those of Canarian literature and all the tents of bookstores, publishers and institutions in a wide perimeter sector that attracted an audience that came “exclusively to enjoy the Book Fair.”

The new normal “has already passed and the adapted normality has arrived, let’s put it this way, people have already perceived the concept of safe culture and consuming culture is no longer a luxury, it is a necessity. Freedom, information, creativity come through culture and events like this, and participation says it all, people want a decent cultural offer, with quality, with nobility and security, and here is the example ”, since the response has been “brutal”. And as an example he cited that an hour passed on the last day to enter the parking lot. And it has not been the only queue, there have also been queues to obtain a signature and to buy, so the booksellers were very satisfied.

The Book Fair, precisely at this time, marks a “before and after” because it highlights that “with a series of measures that we already know we can develop any type of activity,” added Moreno, who assures that it is the most reception has obtained from those he has witnessed and who considers that all the arts are going to generate a mass call because “it truly feeds, it nourishes society”, so this appointment has been “magnificent and outstanding, and welcome”, concluded.

So much so, that the copies of The Rose of Hercules of Tomás Morales were sold out in the tent of the Cabildo de Gran Canaria, whose manager, Víctor Rodríguez, assures that there were times when he did not have time to “write down the sales” and was even able to deliver, with great satisfaction, a complete collection of the National Episodes by Benito Pérez Galdós, an author in high demand during the literary appointment.

“The flow” of the public has been impressive, who showed interest in the endless works exhibited by the insular Institution such as ‘The island of the canaries’, of which it sold several dozen, those related to the Flora of Gran Canaria, traditional stories, those of Alonso Quesada and many more.

The same happened in the tent of the City Council of Las Palmas de Gran Canaria, where the transfer and sales did not stop despite having a more limited and specific catalog related to capital meetings such as the Film Festival, in addition to works supported by the consistory , explained Jehosua Arroyo, who also stressed that the works related to the history of the city aroused great interest.

The Casa África space was not far behind either, a tent shared with the publications of the Malas Compañías publishing house, explained the writer Ana Cristina Herreros, who assures that these days have been “full, with many people” interested so much in the publications of the State entity as in the books of this publishing house from Madrid, each one linked to a project with Africa.

With The dragon that ate the sun literate Senegalese women, with The tales of the rabbit they have a textile project called Sew on hope with albino women from Mozambique, The hedgehog stories It is for its part an illustrated book by Sahrawi women with henna, The Jungle Book of the Baka Pygmies They did it in Cameroon with the pygmies of the jungle located between Congo and Gabon, with whom they also have an educational project.

Diego Pun is a Canarian publisher whose head of the marquee, Estíbaliz de la Cruz, was equally satisfied because the Fair has allowed him to publicize the books of this eminently children’s and youthful label, and also sell many copies, whether they are those that collect oral legends of witches, pirates, old houses or ravines, or Voices from malpaís based on aboriginal legends with women as protagonists.

“We have a true commitment to education and the public was surprised by the quality” of the publications, including the project to bring the classics closer to minors, such as The Quijote and Lazarillo, and the one they launch this week, Bell towers and springs, to bring the Canarian poets of the twentieth century to the classrooms in book-album format, since they bet on images as a tool to encourage reading, although it does not rule out that it seduces adults as well.

Its objective has been to reinforce the knowledge of the publisher so that the public is kept informed by its networks and the web so that they can place their orders in bookstores, which are the vehicle to reach readers.

And not only bookstores and publishers celebrated the atmosphere, but also the writers were eager to meet their audience and were delighted with the welcome, from Julio Llamazares to María Oruña, Christian Gálvez, Elisa Levi, Andrés Caparrós, Manuel Vilas, all those who had come. Outsiders were delighted to be on the island, at the Fair, with the weather and with the joy of their audience.

Also the island creators, who gave no respite to the Canarian Government’s Continuous Session tent, which kept the atmosphere high every day with their presentations every half hour, as well as those of the Arcoiris, Letras a Quemarropas and Letras Negras cycle.

For all this, the vice president of the Las Palmas Booksellers Association, Antonio Rivero, expressed his satisfaction, since the volume of the public and sales, with queues to pay, has reached levels prior to the pandemic, or even more, Sandra Blanco, from the Neighborhood Bookstore, said because the public has welcomed them “with open hands.”

Last year’s Las Palmas de Gran Canaria Book Fair was atypical, one of the few that managed to be held in Spain, and the only private event authorized by the Ministry of Health, so it has not only exceeded expectations regarding that edition that had greater restrictions, but with respect to those prior to the pandemic, that is why Sandra Blanco assured that her bookstore “will continue to come”, as well as Onirion, an editorial that premiered this year composed of several juvenile authors who exchange characters of the same fantastic universe.

“I was doubtful, but I am super happy because in fact many products have even been sold out, they ask us a lot, they have been interested and we have sold a lot,” exclaimed Melani Garzón.

For all this, the organization is already thinking about the next edition, writing down all the suggestions, proposing new improvements and thanks the institutional union that has made this 33rd edition prosper, from the Las Palmas de Gran Canaria City Council and the Gran Canaria Council Canaria, who redoubled their financial support, to the Government of the Canary Islands, which collaborated from the Ministry of Tourism, Industry and Commerce, to which the Elder Museum and the Canarian Institute for Cultural Development also belong. This edition also featured, for yet another year, the support of Casa Africa, as well as the private firms of Nissan, Cadena Cope and AC Hoteles, which also supported the celebration of culture.