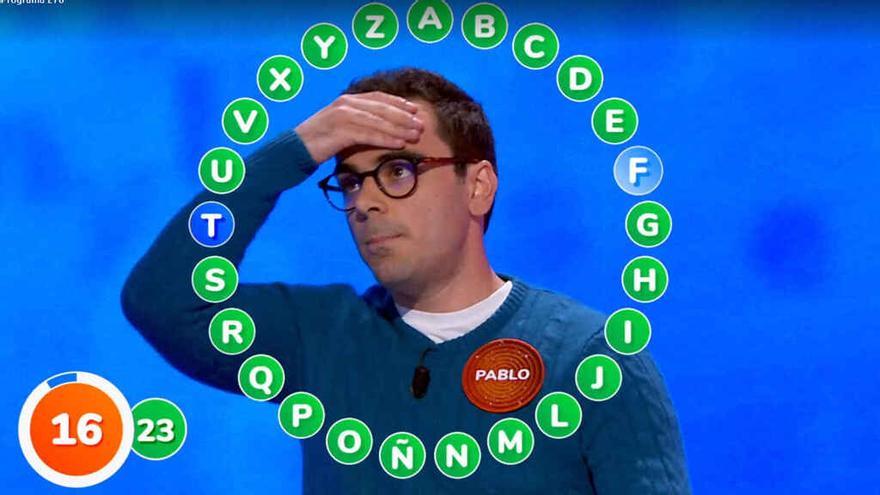 Pablo Díaz, Pasapalabra's favorite contestant, has not been able to avoid throw a blasphemy before the success of his masterpiece during the afternoon of Tuesday, June 1. Pasapalabra, the most followed entertainment contest in its time slot, with a 25% average screen share, sometimes it teases the audience by the new way of playing of its participants. Just a week ago they set fire to the networks complaining about the end of the contest, product of tactic inaugurated by two of its oldest contestants: Díaz and Luis Dávila.

The blasphemy of Pablo Díaz


This time the stupor of the tweeters went in another direction. The patience of the followers ran in tandem with that of Pablo Diaz, with the nerves on edge before a possible masterful move that finally got.

Pablo Diaz starred in one of those Historical comebacks in Pasapalabra: unleashed, true to his tactic, a impressive hitting streak until two to go to take the boat. The F and T have resisted him.

The anguish and anger in Pablo could be felt in front of the screen when he found that he did not remember the answers he lacked. At that moment, he has released a comment that with the tension of the moment to many has gone unnoticed but that many others have criticized in social networks. In particular his words have been "I shit on God".

To many of the viewers of the program presented by Roberto Leal They did not like that statement and they have made it known in the video that the program's account has posted on Twitter.

😳 This moment has taken all of us breathless. 😱 Impressive the new play of @pablodiazviolin which makes him a winner of # Password276. How have you experienced it? We repeat, AWESOME. 👏 https://t.co/DyOMSfTBlE pic.twitter.com/m2kpvbOkaX

Well, I have seen it with very little education. There are words that should not be said and less publicly ... I don't know, but there should be some kind of penalty. Hold your tongue next time

I understand that it is an expression completely out of place, that hurts religious feelings. I hope the program intervenes and Pablo apologizes.

a lot of crystal generation in these comments

Well, I do not see that it is so serious. Hilais fine, yeah


Contestants Han created a new era in Pasapalabra: they play on the donut as if it were a board whose letters they draw like chess pieces.

The application of their sophisticated way of understanding the contest marks a before and after in the program, whose proposals are easy to follow and understand both by players and by spectators.

It could be considered that Díaz and Dávila, the new Kraprov and Kasparov of Antena 3 have given a masterful twist to the entertainment format in the purest Gambit de Dame style, but its viewers are not satisfied.


The stratagems that both players deploy are related to poker, it is difficult to guess whether or not they know the concept behind the letter.

They say part of the words that are known, the most obvious, and they do it very fluently. They pass word very frequently, the game start agile. Until the decisive moment, in which one contestant and another they do not know if their opponent is in control of the game and is "bluffing" or not. Contestants circle the donut for the first time in record time and usually have many seconds to spare.

The intellectual duel starts there. Among them and for those who are not followers of the program it can be a genius, but the truth is that fans miss the traditional format. In fact, Pasapalabra fans are outraged, have lost patience and They turn their frustration on social networks.

It is the second time this week that his way of acting angers the debate on social media.


There were 19 minutes left of the program when Dávila had managed to finish the first turn to go for the letters that had been left. He had 50 seconds left, but it was an eternity for viewers.

Few shifts later and tAfter being left alone with the letters H, M and P, Dávila has said 'pasapalabra' over and over again until the end, without being able to solve any of them to end up with 22 hits and without failures.

While Dávila was passing word, Díaz, one of the most historic contestants in the format, has been going back by adjusting the score until he made a mistake. With eight seconds to go, with 22 hits and one miss and after several minutes of passing his turn, he has had to gamble to break the tie. The Tenerife has failed and will go this Friday to the blue chair.

LSpectators have not given credit for the almost 20 minutes that they have been passing word until the final outcome. Some have even commented that this rhythm was not going to present Vicente Vallés Antena 3 Noticias.