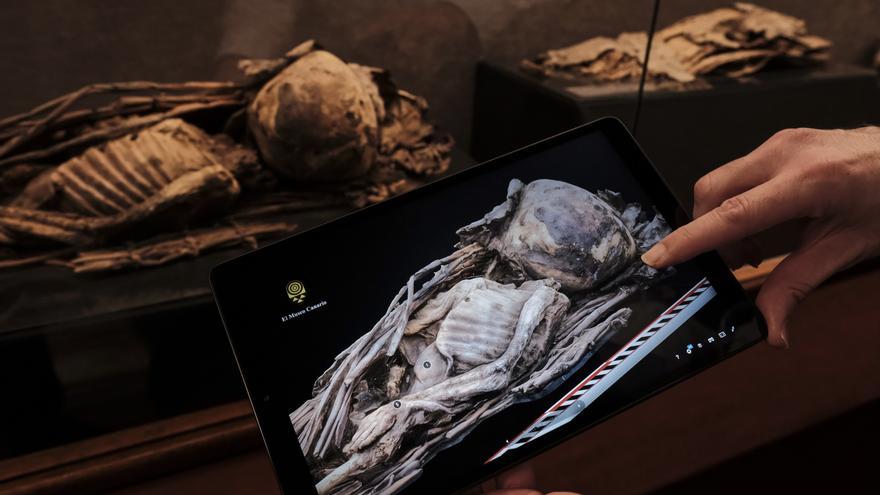 He Canary Museum has just made the dream of all those people come true who when they visit an archeology collection would like to have the pieces in their hands, scrutinize them, look at them from all angles and know everything about them. In their rooms it is enough that they carry their mobile.

The center, which houses the most important archaeological collection on the ancient inhabitants of the Canary Islands, offers from this Monday to those who physically visit its rooms (and soon also through its website) the possibility of manipulating virtual form 23 of its most significant pieces, modeled in detail in three dimensions.

To do this, no app is needed, just scan with it.to the camera of the mobile phone or a tablet with an internet connection a QR code, which makes it automatically appear on the screen a 3D model faithful to the millimeter to the original, which you can rotate, zoom in and explore as you like, while you have the piece on the other side of the glass of the showcase.

These interactive images have also been enriched with augmented reality techniques so that the visitor is not left with any curiosity to satisfy: what is the piece they are looking at, where was it found, what century does it come from, who is it, if at all It is about a human remnant, what is known about the conditions in which he lived, what was his social position, how he died …

The Canarian Museum had already ventured into these three-dimensional exhibition techniques three years ago, modeling with laser scanners three of its most significant mummies: a 5th century man wrapped in one of the most spectacular shrouds known to date among the aborigines of the islands, a woman of the 7th century and a child of about two years of the 7th, with a spectacular state of conservation (the skin and part of the organs can still be seen in it).

Now, with the support of the Government of the Canary Islands, it has taken the step of continuing to model more pieces to add to its virtual exhibition offer 20 key objects in the pre-Hispanic history of the islands and also from the first years of the Castilian Conquest.

The three mummies are now joined by the iconic Tara Idol, another female idol, several pintaderas (useful for stamping a drawing as a seal), two grain grinding stones, a basalt pick, three ceramics (including one of the best known of the Museum, for its decoration with the sun and the moon) and a human skull.

The Museo Canario has hundreds of aboriginal skulls in its display cases, each with its own story. The one presented in 3D is one of the most recent: it is known, among other things, because the face of the unfortunate protagonist is crossed by a mortal wound, an open gash with a weapon unknown in the islands until the Conquest, the sword.

Another of the 3D models also allows one to approach the conditions of survival and rudimentary medicine, through a fractured and roughly welded femur; so much so that the person to whom it belonged was lame for life: he lost 10 centimeters in leg length after suffering that injury.

The Minister of Education and Culture of the Government of the Canary Islands, Manuela de Armas, has congratulated the Museum for this initiative, which she has considered not only successful, but also relevant for a moment in today’s society in which it is convenient to open virtual channels, as revealed by the months of confinement by Covid.

In this sense, he recalled that the Canarian Museum is probably the most visited cultural center on the islands by schoolchildren in organized activities, which can now also count as a support resource with this example of augmented reality.

Miller hosts in November Pista CERO, an aperitif of the Festival that will return in 2021

Merche and María Pagés join the board of the SGAE

The IES Doramas hosts an exhibition in homage to Martín Chirino