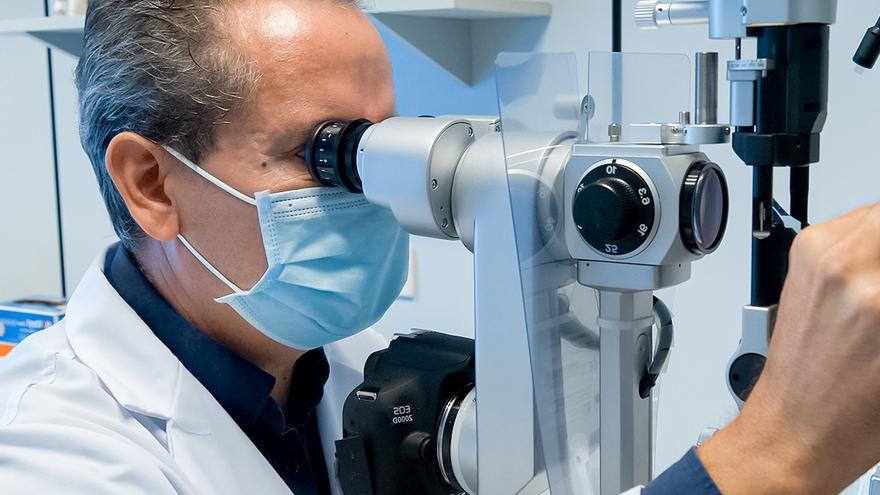 Diabetic Retinopathy is the leading cause of blindness in people with diabetes. Vithas Eurocanarias Ophthalmology Institute, on the occasion of the World Diabetes Day which is held every November 14, has wanted to show its commitment to the early diagnosis and control of Diabetic Retinopathy, through informative actions aimed at the population and, above all, with the recent creation of the Retina Institute, the largest center in the Canary Islands dedicated exclusively to pathologies associated with the Retina.

This service is already operating at full capacity on Calle León y Castillo, 269, Las Palmas de Gran Canaria, with its own facilities and a team of ophthalmologists with a strong specialization in pathologies that affect the Retina and Vitreous, both in the medical and surgical dimension: Dr. Miguel Reyes, Dr. Alfonso Manrique de Lara, Dr. José Luis Vilamajó, Dr. Iván Rodríguez Talavera and Dr. Marina García.

The prevalence of diabetes in the Canary Islands, the highest in Spain

According to the Strategy for the Approach to Diabetes Mellitus in the Canary Islands of the Canary Islands Health ServiceCurrently, the incidence of Diabetes Mellitus is growing worldwide, being considered by the WHO as one of the 4 non-communicable diseases with a preferential approach, both due to the impact of the disease on people’s health and the burden that it entails for health systems. In the Canary Islands, this increase in the annual number of new cases of Diabetes can also be seen, with an incidence of 10,773 new diagnoses having been registered in 2018.

The prevalence of diabetes in the Canary Islands in the population aged 15 years and over is the highest in Spain, having maintained a growing trend in recent years. The Islands face a general alert due to the concurrence of high risk factors, such as poverty, obesity and diabetes, the three related to each other and in which the Archipelago is a leader at the national level and in its environment.

How does diabetes affect vision?

Diabetes is the cause of numerous eye diseases, being Diabetic Retinopathy the most frequent and disabling due to the anatomical and functional repercussions it has. For this reason, Vithas Eurocanarias Ophthalmology Institute has an Ocular Diabetes Unit in which a joint collaboration is carried out between a retina specialist ophthalmologist and a specialist in endocrinology and nutrition, with the intention of providing the comprehensive care they require. these patients.

Between 13 and 14% of the population in the Canary Islands is diabetic and within this group 20-30% will have some degree of Diabetic Retinopathy.

“The unfortunate thing is that a large number of patients with diabetes still do not know that they are and therefore cannot treat or prevent this disease,” says Dr. Miguel Reyes, ophthalmologist at the Instituto de la Retina de Vithas Eurocanarias.

Diabetic Retinopathy is the leading cause of blindness in people with diabetes. The worrying thing is that a large number of diabetics still do not know that they are and therefore cannot treat or prevent the disease, since they have not yet been diagnosed

The doctor adds that there are many patients who come to the consultation with Diabetic Retinopathy and do not even know that they suffer from this disease. “Almost more than preventing Diabetic Retinopathy, it is important to diagnose diabetes early, since in this way it can be treated properly and reduce the risk of ocular manifestations, among other consequences,” he says.

The importance of regular ophthalmological examinations

In patients with diabetes, a rigorous ophthalmological monitoring, since generally, Diabetic Retinopathy does not cause symptoms until the injury is severe. The ophthalmological examination in type 1 diabetics should be performed 3-5 years after diagnosis.

Given the increase in retinal pathologies in the Canarian population, Vithas Eurocanarias Ophthalmological Institute has launched the Retina Institute, the largest center in the Canary Islands dedicated exclusively to pathologies associated with the Retina

The ophthalmologist will propose control reviews based on the vision loss of each patient. In either case, it is desirable to diagnose retinopathy before symptoms appear. These screenings are especially recommended for pregnant women and people with poor metabolic control of diabetes.

Lanzarote, El Hierro and Tenerife, where more cases are concentrated

According to the Canarian Health Service’s Diabetes Mellitus Approach Strategy in the Canary Islands, the areas that in relative terms concentrate a greater number of people with diabetes suffering from diabetic retinopathy are, in order: Lanzarote, El Hierro and Tenerife.

The Vithas group It is made up of 19 hospitals and 22 medical centers, distributed throughout 13 provinces. The 10,600 professionals that make up Vithas have made it one of the leaders in Spanish healthcare. In addition, the group integrates the Vithas Foundation, Vithas Diagnostic Network, the purchasing center PlazaSalud24, and a participation in the Juaneda Assistance Network, the first hospital group in the Balearic Islands.

Vithas, belonging to the group Goodgrower, bases its corporate strategy on accredited quality of care, patient experience, research and innovation, and social and environmental commitment.