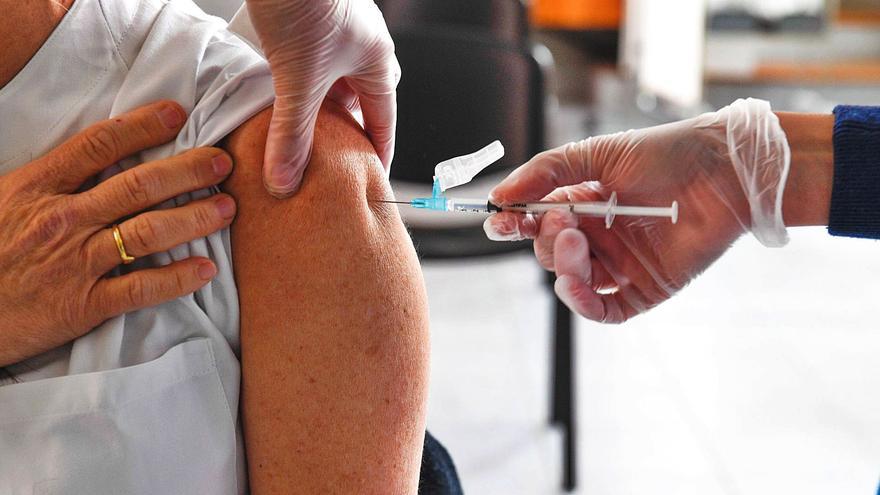 The Canary Islands is the fifth region with the least amount of vaccines against Covid-19 per 1,000 inhabitants, taking into account the population considered by the Ministry of Health to calculate the accumulated incidence of the pathogen at seven and 14 days ahead. Thus, on an average estimated at 2,153,479 people, and based on the latest report published by the state government department, the Archipelago has a total of 82 doses for every thousand individuals, and is only ahead of the Community Valenciana, with 78; Ceuta, with 73; Balearic Islands, with 69; and Melilla, with 58.

The numbers therefore show a great difference with Asturias, which leads the table with 133; followed by Castilla y León, with 125. However, it should be noted that the immunization strategy excludes those under 16 years of age from the campaign because there are no clinical trials that demonstrate the effectiveness of the sera in this group, so the The objective is to immunize 70% of the population from this age group onwards before the end of the summer.

Likewise, if the latest values ​​are compared with those released just one month ago, on January 25, significant variations can be seen. Asturias continued in the first position, with 42 doses per thousand people, but the Islands occupied, together with the Valencian Community, the penultimate place, with 22 doses on the same population count, very slightly ahead of the Balearic Islands, with 20 units per every thousand inhabitants.

What factors are taken into account for the distribution of vaccines? As detailed by the Regional Executive Health Council, the Ministry attends to population criteria that go hand in hand with the percentage of people that make up each target group: institutionalized elderly and nursing home workers, health workers, people with a high degree of dependency and those over 80 years.

In this sense, and referring to the latter group, in the Canary Islands the elderly of these ages represent 7.39% of the population, compared to the 15.77% recorded by Asturias out of a total of 1,022,783 inhabitants, and 17 , 5% that reflects Castilla y León, where 2,399,575 people reside. “The distribution is made always bearing in mind these criteria,” emphasize from the administration.

Since the start of the campaign, the Islands have received 132,960 doses of the antidote developed by Pfizer and BioNTech; 7,000 from Moderna’s serum; and 37,100 of that produced by AstraZeneca. Until Wednesday, the Canary Islands had administered 136,150 vaccines of the 177,060 received, which translates into 76.89% of the total. Tomorrow a new shipment will arrive with 15,620 doses of Moderna’s vaccine and a shipment with 7,780 of AstraZeneca’s.

In total, 52,815 people have already completed the guideline and are immunized against the coronavirus, representing 3.92% of the target population. As regards group 1 of the strategy – residential users and personnel working in these centers – the inoculation has already been concluded between the group and 97.88% have received the two doses of the compound, while in the group 2 – first line sanitary ware – the percentage stands, so far, at 83.53%. In group 3, on the other hand, –other health and social health professionals– only reached 5.31%.

This week the vaccination activity has continued among the members of the fourth group – large dependents and their carers – which has achieved a coverage of 28.46%. Also, people over 80 years of age have been cited in health centers –group 5–, of which 4.57% have already accessed the first dose.

During the last day, the region reported 166 infections and one death in Gran Canaria. The death corresponds to an 82-year-old woman who was afflicted with previous illnesses and who remained admitted to a hospital. This death brings to 584 the count of deaths produced in the Islands as a result of complications related to the SARS-CoV-2 infection.

Right now, in the Archipelago there are 5,740 people suffering from the disease, which shows a decrease of 23% in contrast to the sum found three weeks before – on February 4 -, when 7,453 individuals suffered from the condition

By islands, Tenerife remains the hardest hit by the pandemic and, after adding 61 cases, it already has 16,826 accumulated, of which 2,244 remain active; It is followed by Gran Canaria, which added 71 detections to its statistics and accumulates 16,486, with 2,995 patients pending their evolution; Lanzarote, with 4,403 accumulated clinical pictures – ten more – and 285 epidemiologically active; and Fuerteventura, which added 22 infections to its registry, which bring its accumulated to 1,622 and place its assets at 173.

On the other hand, La Palma found two new cases and has reported a total of 389 since the beginning of the health crisis. On this island there are 17 patients with coronavirus. Likewise, El Hierro managed to keep its data unchanged and has 290 accumulated tables and 21 active ones. Finally, La Gomera also did not record new cases and has 209 accumulated and two ongoing infections.

It should be noted that Health reported yesterday of an outbreak of Covid-19 of intra-family origin in the municipality of Tazacorte, on La Palma, which affects seven people. As indicated in the protocol, the afflicted are isolated and the corresponding screening tasks have already been carried out among all close contacts.

Until yesterday, 342 patients with Covid-19 were admitted to the community hospitals (29 fewer than until last Thursday, February 18). Of this number, 260 fight the virus in plants and 82 in intensive care units (ucis).

The good news, as usual, comes from the highs. And it is that, since the last balance, 371 people have managed to overcome the disease, so that there are already 33,901 patients who have managed to free themselves from the pathogen.

According to the information handled by the Ministry, a total of 864,112 Polymerase Chain Reaction (PCR) tests have been carried out in the region, of which 5.24% have revealed a positive diagnosis in the condition. Only during last Wednesday 2,948 were practiced.

In order to reduce the risk of contagion, Health has decided to extend until after Easter the screening of all passengers coming from the peninsular territory and entering the Canary Islands through ports and airports.