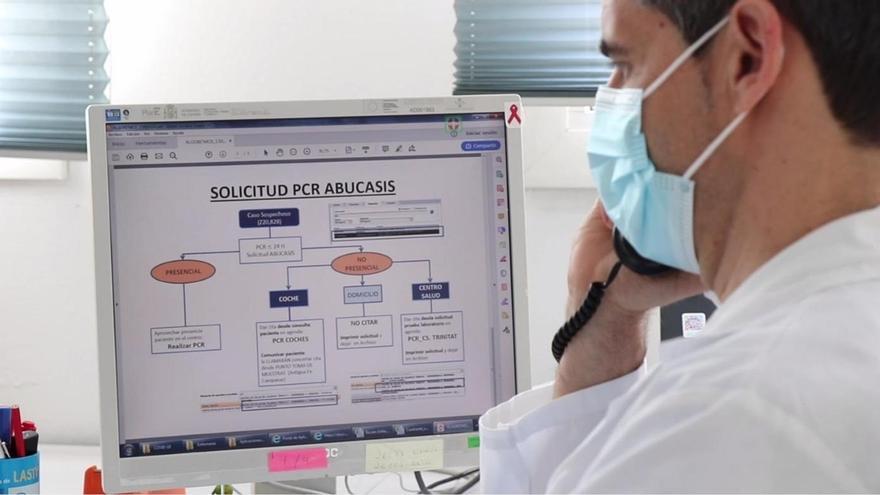 He Canary Islands Health Service account in the currently with 350 trackers and aims to reach 500, growth that will be linked to profiles not strictly sanitary given the difficulties in finding available doctors and nurses in the labor market.

This was explained this Friday by the specialist in Preventive Medicine and Epidemiology of the General Directorate of Public Health, Eva Álvarez, in a digital meeting with the media in which she highlighted that there are already a dozen military trackers requested from the Ministry of Defense that operate in Gran Canaria and Lanzarote.

“They have been integrated very well and are coordinated by health personnel,” he indicated, underlining that the objective is for them to “have versatility” to be able to make reinforcements on another island if necessary due to the increase in cases.

Álvarez has acknowledged that he does not like the term tracker very much given that they are “professionals who follow up close contacts” nor that their suitability is fixed on the number of inhabitants.

“If in 48 hours you identify all the contacts, the tracking system is good to cut the chain of transmission”, has commented.

At first, he commented, the trackers were doctors and nurses because they are used to working with the SCS computer systems and have “clinical experience” with the symptoms, but as it is increasingly “more difficult” to find profiles, it has been extended to other .

The doctor has assured that their incorporation is not immediate “and they must be organized”, for example in the management of computer systems, but has highlighted as a quality the capacity for empathy and listening and a “special sensitivity” since it is “difficult” to explain a quarantine and convince the affected of its need to protect public health.

The trackers are active from 08:00 to 20:00 every day, distributed in morning and afternoon sessions – following the scheme of health centers – plus 12-hour shifts on duty on weekends. In addition, they have the support of the Primary Care network, which is in charge of monitoring the cases.

Patricia Viña, a Primary Care nurse, has described that the day begins with the daily list of new positive cases, who are called by phone to establish the network of close contacts in the previous days.

From there, they are called by phone to tell them to do the PCR test and quarantine after 10 days, when a second test is done that if it is negative again, they are discharged if they are asymptomatic.

There are always three calls separated by 15 minutes apart and on each shift, and on many occasions it is not possible to contact those affected – they do not pick up the phone or they have given the number incorrectly, Viña said, highlighting that yes Although family contacts are well defined, the same does not happen with those in the social or work environment.

It has recognized that there are practically no problems for affected people to undergo the PCR test but there are for isolations and quarantines, at which time a protocol is activated, through Public Health and the health center itself, in which alerts the authorities to intervene and impose a sanction – according to the decree law of the Government of the Canary Islands, up to 60,000 euros are set if isolation is breached and another 3,000 euros for quarantine.

“Many times you know that they are not going to comply with quarantine or isolation because of how he talks to you and there you explain the advantages of defending the health of all,” he said.

“THE VIRUS DOES NOT UNDERSTAND FRIENDS OR CO-WORKERS”

In favor, he has indicated that sometimes the families themselves protect themselves and despite the fact that there is a positive in the family unit, the rest of the members do not contract the virus.

In this sense, Álvarez recommends that the person in isolation has his own bedroom and bathroom, use a mask in common areas and avoid shared objects, the same as at meals, do not use a common plate.

When trackers are notified of a positive case in the workplace, they contact the company occupational risks to learn about the measures available during working hours and there it has been discovered that the main weakness is sharing the time of rest or coffee.

“They tend to be small and closed spaces where everyone gets together to have coffee or eat something,” he stressed, hence he advocates leaving an open dependency of the company or even leaving the building. “The virus does not understand from friends or colleagues, it is not transmitted to you by a person on the street or at a traffic light,” he said.