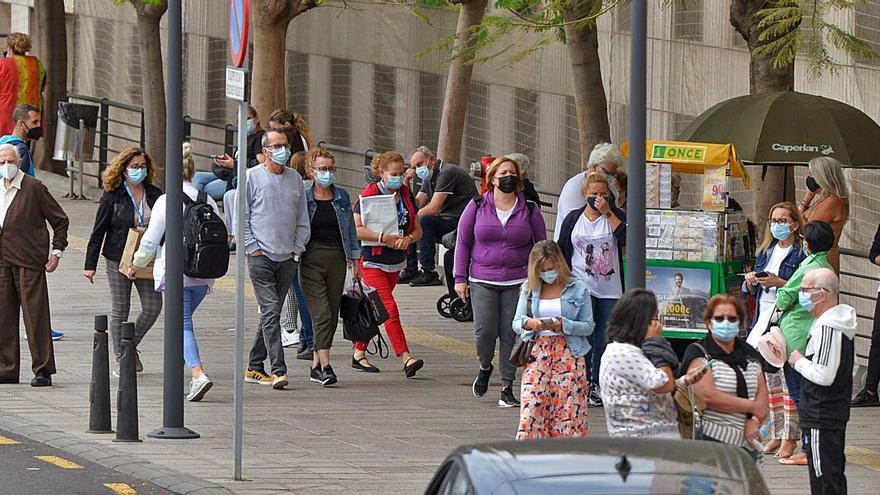 As reported by the Regional Executive's Health Department, Tenerife added 96 tables this Sunday, raising its accumulated count to 26,487, of which 1,483 remain epidemiologically active. Gran Canaria, on the other hand, found 14 positive diagnoses in the condition and has 23,156 accumulated and 386 patients pending its evolution. The truth is that the accumulated incidence in the last seven days has improved notably on the Island, since it went from reflecting 25.48 cases per 100,000 inhabitants, on June 13, to 20.81 on the same population count, yesterday . It should be noted that this indicator marks 46.97 squares for every 100,000 people in the Archipelago as a whole.

Lanzarote recorded four detections and already has a total of 5,689, with 75 people affected by the disease, while Fuerteventura found nine infections and has accumulated 2,478 and 75 active. La Gomera, for its part, only registered one case and amasses 246, with 11 patients suffering from the pathology.

On the contrary, both La Palma and El Hierro did not report new clinical pictures, so the first one remains with 574 accumulated and three active, and the second, with 372 and one ongoing.

Right now, there are 2,065 active cases of coronavirus in the Canary Islands. The most affected municipality is Santa Cruz de Tenerife, which has 855. It is followed by Las Palmas de Gran Canaria, with 363; La Laguna, with 355; Arrecife, with 72; Granadilla de Abona, with 68; and Adeje, with 53. The rest of the towns are below the threshold of 50.

Based on the information handled by the Ministry, the hospital situation experienced variations since the last balance. And it is that 190 people with covid in the plant remain admitted to the health centers of the Canary Islands - eight more than those notified last Saturday - and 22 in the critical areas - one less.

In the course of the last 24 hours, only 26 new discharges were issued, although with these there are already 56,157 patients who have managed to win the battle against SARS-CoV-2 in the Islands. Since the beginning of June, the Archipelago has added 2,189 epidemiological discharges.

In order to stop the spread of the microorganism and to immunize 70% of the target population on July 31, the vaccination activity continued yesterday in the mass inoculation centers and in the university hospitals. While waiting to know today the number of doses administered during the weekend, the latest data indicate that 1,522,712 units of sera have already been injected in the Canary Islands, which have allowed 591,312 people to complete the regimen, 31.6 % of calls to this campaign.

In addition, 995,822 users have accessed at least one puncture. It must be remembered that the non-capital islands began to vaccinate the age group between 30 and 39 years old since last week and that Gran Canaria and Tenerife will begin these days to inoculate the group. In addition, a new shipment with 125,200 doses of Pfizer prophylaxis is scheduled to land in the Archipelago today.

Since the outbreak of the pandemic, 1,185,746 Polymerase Chain Reaction (PCR) tests have been carried out in the autonomous community. Of the total, 61,522 have shown a positive result for coronavirus, which translates to 5.19%. On Saturday, 2,274 were practiced.

The health control that travelers from the Peninsula or from a country that is at risk and whose destination is the Canary Islands must pass yesterday caused queues at the Gran Canaria airport, where dozens of people waited in line to be able to Present the documents that prove a negative result in the SARS-CoV-2 infection, after having undergone some of the accepted diagnostic tests (PCR, antigens or TMA). This measure will be in force until July 31 and does not affect those national travelers who demonstrate having received the complete vaccination schedule, in the eight months prior to the displacement, nor those who have been outside the region for a period of less than 72 hours prior to arrival. | LP / DLP

Two consecutive days without deaths from covid in the Canary Islands and 124 new infections. Read more

The end of the masks in Spain faces the Government, the opposition and some autonomies. Read more

The Canary Islands administer 95.18% of the more than 1.5 million vaccines received. Read more

Tenerife adds 131 of the 167 new infections of covid-19 in the Canary Islands. The Archipelago does not register deaths from coronavirus in the last 24 hours. Read more

A woman dies from coronavirus in the Canary Islands and infections rise in 188 cases. Tenerife, with 140, accounts for most of the new diagnoses in the region. Read more

The Ministry of Health of the Government of the Canary Islands will launch a new mass vaccination point against COVID-19 in Tenerife, with the capacity to inoculate about 10,000 users a day. It is located in the Santiago Martín Pavilion, in La Laguna, managed by the Nursing teams of the Nuestra Señora de Candelaria Hospital in coordination with the Tenerife Primary Care Management, it will have the capacity to set up 40 to 50 vaccination posts.

This action joins others already underway with the opening of new points both in Tenerife and in Gran Canaria in the last week to promote vaccination, which will continue to advance with other age groups as the doses contemplated in the Strategy continue to be received. of Vaccination against COVID-19.

More than 30% of the population of the Canary Islands is already immunized against COVID-19. Read more

A 72-year-old woman has died with Covid in Lanzarote, as reported by the Ministry of Health of the Government of the Canary Islands. The deceased she was admitted to the ICU of the Molina Orosa hospital since last January, as reported by the Island Health Area.

Zero patients escape tracking and cause the virus to spread throughout Tenerife. Read more

Nightlife opens this Friday in Gran Canaria after ten months off. Read more

Tenerife maintains itself with the highest incidence of the virus. At the moment it has a cumulative incidence at 7 days that is three times that of Gran Canaria. This is attributed to the cases in Tenerife are concentrated in younger ages, with a higher percentage of men (who tend to be less demanding of health systems) and present a more dispersed territorial distribution in environments that in turn tend to use these health resources less

One more week without changes in the alert levels by islands: Tenerife, Lanzarote and La Graciosa, at level 2, and the rest at level 1.

A woman dies from covid-19 in the Canary Islands and 159 new infections are registered. Most diagnoses are reported on the island of Tenerife. Read more

The covid incidence improves in the national territory and worsens in the Canary Islands. Read more

The Canary Islands registered 81 outbreaks of coronavirus in the last week. Most of the infections are in the social sphere. Read more