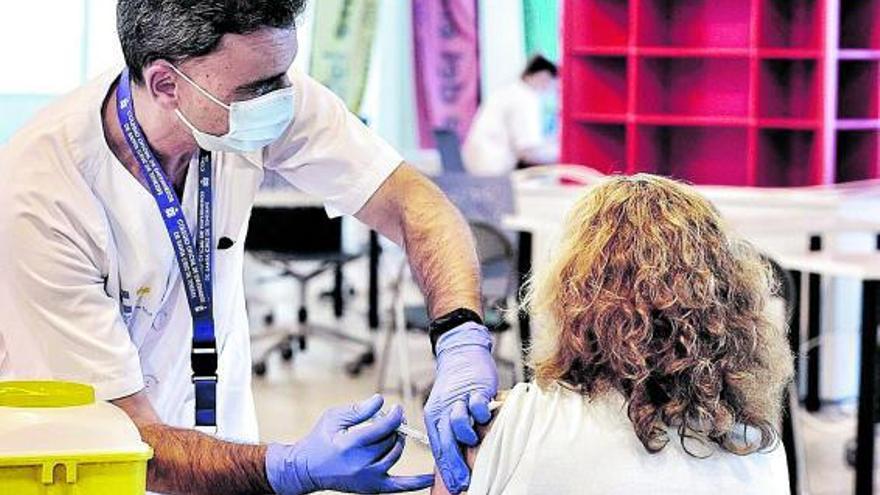 This is the second time in less than a month that the National Executive decides to stop the administration of the vaccine at the University of Oxford. On March 15, the Ministry made the decision to suspend it preventively for two weeks – it was finally only one in the case of the Canary Islands – in response to the need to carry out more studies to know if the links between cases of thrombi and the inoculation of this vaccine were directly related. On March 16, the European Medicines Agency (EMA, for its acronym in English), claimed not to see “causal links” between the two events. Yesterday, less than a month later, and under the shadow of the distrust that the vaccine has generated since that moment, the EMA was pronounced again but this time for having found “possible links” –very rare– between the cases of thrombi and administration of the vaccine.

The Ministry of Health, according to what was agreed in the Interterritorial Council, will maintain the vaccination of the group between 60 and 65 years old. The campaign aimed at this group began two weeks ago, on March 24 and, so far, 20.9% of the total have been vaccinated with at least one dose, and 3.9% with two. Last Wednesday, April 7, the vaccination of the group of essentials was also resumed, which lasted one day. In this sense, Health said that the vaccination of this group will be paralyzed, less for those over 60 years of age. This Saturday, a call for members of the National Police who were born between 1956 and 1961 (between 60 and 65 years old) is still in force. The vaccination campaign in the Islands remains unchanged in those over 80 years of age, who will continue to be summoned to health centers to receive their dose of Pfizer. Yesterday it was agreed to extend the age of inoculation of AstraZeneca to 69 years, with which the next group to be immunized will be the one from 66 to 69 years and, while the spokesman for the Government of the Canary Islands, Julio Pérez, assured that the The archipelago has not considered starting any type of negotiation to acquire the Russian Sputnik vaccine.

Meanwhile, uncertainty, concern and fear grows among the different groups. In the Anpe Canarias educational union, doubts have arisen such as “what effects will have to be watched now” or “if the scheduled calendar will continue”. In the STEC-IC they have confirmed that “the number of people who do not want to be vaccinated has increased”, as pointed out by its representative in the Islands, Gerardo Rodríguez. And although both strive to call for tranquility in the group, the truth is that not only are reluctance growing between them, they have also begun to request to be vaccinated with another product, such as Pfizer. The National Police goes further and criticizes the lack of organization. In fact, the Spanish Police Confederation (CEP) has criticized the “chaos” to which they are subject, having to depend on the regional government to receive their immunization. “The National Police has health resources so that, if Health provides the product, they are administered without resorting to the autonomous community,” said José Luis Gallardo, secretary general of the CEP. All unions agree that more information is necessary, since it is not possible for them to satisfy the doubts that this situation is causing in essential groups. Rodríguez reiterated that this is not the time to carry out a call for competitive examinations in which 15,000 people are going to gather. “They can be postponed” – he insisted – until the epidemiological situation is more favorable.

Health subject the second dose to the evaluation of the EMA

Health has made the inoculation of the second dose of AstraZeneca contingent “as the scientific evidence, the EMA evaluations and in communication with other countries of the European Union are updated and expanded.” This was announced yesterday by the Ministry of Health, which for the moment rules out using AstraZeneca again to complete the vaccination schedule for these people. However, an alternative is being sought based on the emerging scientific evidence. This was stated by the Ministry of Health of the Government of the Canary Islands, which clarified that to people who have already received the first dose of this vaccine that the immunization will be completed in the way that the experts decide in the next few hours. The Technical Commission for Health evaluated two research studies, one that tries to verify the effectiveness of using the Pfizer vaccine as a second dose of AstraZeneca and another that studies the immunity generated with just one dose of AstraZeneca. The Minister of Health, Carolina Darias, advanced that she is considering this possibility as “the percentage of efficacy is 70% with only one dose.” For its part, the Spanish Society of Immunology (SEI) advises giving the second dose of the AstraZeneca vaccine to all people who have received the first and highlighted the need to carry out the relevant studies that guarantee the safety and efficacy of mixing different sera . In his opinion, it is “irresponsible to systematically search for and magnify negative details”. VP

14 august 2020 The European Union closes the first supply agreement for a future vaccine for the coronavirus with the British laboratory AstraZeneca to distribute among member countries.

September 9, 2020 The pharmacist decides to temporarily interrupt the last phase of the clinical trial it was running because one of the participants contracted “a potentially unexplained disease.”

January 29, 2021 The Committee for Human Medicinal Products (CPMH) of the European Medicines Agency (EMA) officially approves the commercialization of the AstraZeneca-Oxford vaccine. It becomes the third vaccine against covid-19 to receive the endorsement of European scientists

February 9, 2021 The first 9,000 doses of AstraZeneca arrive in the Canary Islands, which will be used to vaccinate those under 55 years of age.

March 8, 2021 Austria recalls a batch of AstraZeneca vaccines after the death of a nurse who had been vaccinated, although without data that could support the causal relationship.

March 10, 2021 Austria immobilizes a batch of AstraZeneca vaccine considering that it may be behind several cases of venous thrombosis. The Spanish Agency for Medicines and Health Products considers that there are no reasons that justify the adoption of precautionary measures on this batch.

March 15, 2021 The Ministry of Health suspends vaccination with AstraZeneca for two weeks, which means that the Canary Islands stop vaccinating their group of essentials. The EMA defends that “no causal links are seen” between both events.

March 24, 2021 Canarias resumes vaccination with AstraZeneca and, under the criteria agreed upon in the Interterritorial Council, extends the age of inoculation to 65 years. This makes the group of 60 to 65 years old to be prioritized before the essential ones.

April 7, 2021 The Canary Islands resume the vaccination of teachers and security forces and ensures that some 5,000 daily may be vaccinated. The EMA assures that there may be a link between clot events and vaccine inoculation, but that, in any case, it would be a very low proportion. The Ministry of Health decides to suspend vaccination of those under 60 years of age.

The Canary Islands, the laggard in the vaccination campaign