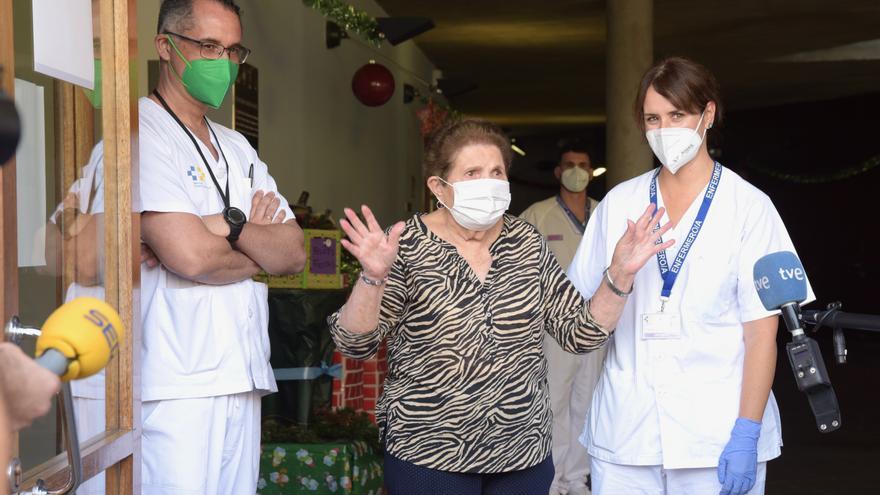 The Canary Islands began this Sunday the administration of the COVID-19 vaccine, which has started in seven residences for the elderly on seven of the eight islands, in which 360 doses have been dispensed among residents and workers of these centers. The day began early in the morning with the delivery of the batch of vaccines to the health authorities at the Tenerife North Airport, where they arrived on Saturday afternoon transferred on an Air Force plane from Madrid.

Three GES helicopters, with the support of the Canarian Police, they have been in charge of the transfer and distribution of medical supplies on Sunday morning to the remaining islands. In total, in this first shipment 400 vaccines have been received.

After this first shipment, the Canary Islands will receive 6,825 doses of this vaccine for each province next week, representing a total of 13,750 doses for the entire Archipelago.

The first vaccine was administered after 2:00 p.m. at the Hospital Nuestra Señora de Los Dolores and, a few minutes later, the vaccination began simultaneously in the residences planned in the other islands: in Gran Canaria at the El Pine tree; in Fuerteventura at the Casillas de Ángel Residence for the Elderly; in Lanzarote at the Amavir Haría and Las Cabreras Residence for the Elderly Dr. Domingo Guzmán; on La Palma at the Nina Jaubert centers for the elderly and for the disabled; on La Gomera at the Immaculada Concepción Senior Center and on El Hierro, at the El Pinar Senior Center.

Vaccination in the Canary Islands has begun this Sunday as in the rest of the Autonomous Communities and for this an operation has been arranged jointly with the Departments of Social Rights and that of Public Administrations, Presidency and Security that has allowed the first doses to reach all the islands so that accessibility to them is guaranteed in all health areas and to the population groups to which it is directed.

In total, the vaccine has been administered to 360 residents and social health workers, giving priority to the most vulnerable population, to then continue until all users of all centers are completed. The vaccine administered is that of Pzifer, approved last Monday by the European Medicines Agency (AEM) and of which the Canary Islands will have 169,000 doses until March.

First phase of the vaccination plan

Vaccination has begun for the population sectors that must first receive the Covid-19 vaccine as defined in the Vaccination strategy against COVID-19 in Spain, that establishes the chronological priority order of the population groups to be vaccinated. Therefore, in the first stage, residents and health and social health personnel who work in residences for the elderly and care for large dependents will be vaccinated.

The first phase will continue with first-line personnel in the health and social-health field and people considered as highly dependent (degree III dependency, that is, in need of intense support measures) who are not currently institutionalized.

The Vaccination strategy against COVID-19 in Spain It has been reviewed by scientific societies and associations of professionals and patients with active participation of the Canary Islands in the working group, as the head of the Epidemiology section of the General Directorate of Public Health, Amós García Rojas, is also part of the President of the Spanish Association of Vaccination.

To define the criteria for the population sectors to be prioritized, the Strategy has taken into account criteria that include the risk of exposure, transmission and serious disease, as well as the socioeconomic impact of the pandemic on each population group. In addition, the Strategy establishes the most important aspects of the logistics, distribution and administration of vaccines and the monitoring and evaluation of vaccination.

The vaccine is administered intramuscularly on a schedule of 2 doses 21 days apart and this vaccine is only licensed for use from 16 years of age.

A team of 150 Canarian Health Service nurses from all the islands have received specific training and will be in charge of vaccinating during the first phase in the social health centers of the Canary Islands. Gradually, training in the administration of this vaccine will continue to all Nursing staff who are usually already dedicated to vaccination in Primary and Specialized Care.

Vaccination is done to directly protect each person from the disease and also to indirectly protect the rest of the population. By reducing the number of people who can get the disease through vaccination, you decrease the number of people who can get sick. The more people are immunized, the less likely it is that the rest of the people, particularly those most vulnerable to severe disease, will be exposed to the virus or at least to high viral loads. Therefore, vaccination is doubly important.

The goal of the vaccination strategy is decrease the severity and mortality of COVID-19, especially protecting those groups with greater vulnerability. Reducing the disease will reduce the impact of the pandemic on the health care system and the economy.

There are several mechanisms during the authorization process to check the safety of vaccines. Like all vaccines, the vaccines against COVID-19 have been tested in humans by conducting clinical trials in different phases, including the use of these vaccines in tens of thousands of people (phase III). These studies (clinical trials) identify the most common side effects that occur during the duration of these clinical trials.

Once the clinical trials show that a vaccine against COVID-19 is safe and effective, it must also undergo a thorough evaluation by Drug Regulatory Agencies in different parts of the world before being authorized for administration. In the case of the European Union, vaccines are evaluated by the European Medicines Agency, in which the Spanish Agency for Medicines and Health Products actively participates.

Until a significant proportion of the population is vaccinated, it is very important that all people, both vaccinated and unvaccinated, continue to maintain prevention measures:

Mask, hand washing, interpersonal distance, limiting the number of people with whom we interact, always choosing open air or well-ventilated spaces, staying home if you have symptoms, waiting for the result of a diagnostic test contact has been made with someone with COVID-19.