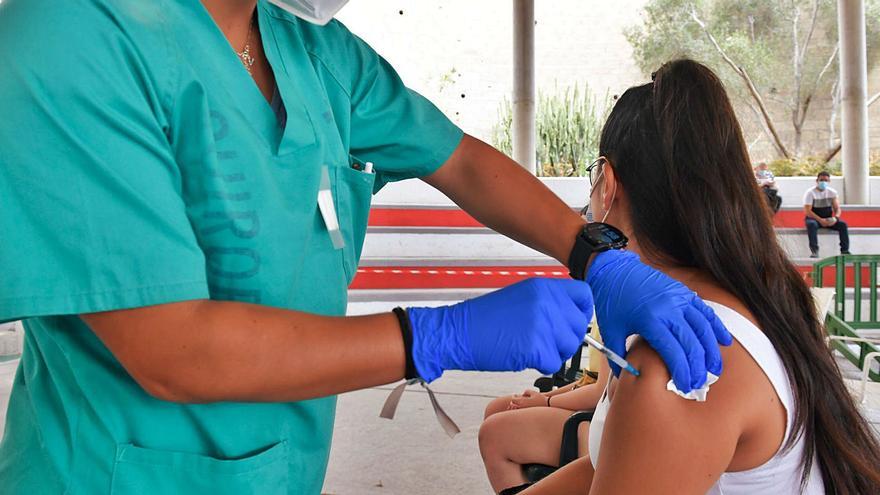 In this way, the Canarian Government intends to follow in the footsteps of France, where the nation's president, Emmanuel Macron, has opted to impose vaccination on health workers, personnel working with vulnerable populations, firefighters and the military. "Denialism is unfair and represents a danger to everyone"Torres sentenced.

As reported on Monday by the Ministry of Health, until the close of the Sunday session, a total of 1,096,319 people in the Archipelago had already completed the vaccination, which represents 55.91% of the target population, compared to 1,420. 373 users who had received at least one injection. “Progress now depends on the population and not on logistics and equipment. We have doses and resources, but we need more people getting vaccinated at the inoculation points ", said the nurse in charge of the Coordination of the Vaccination Strategy in the Canary Islands, Begoña Reyero.

It should be remembered that last weekend, in Gran Canaria, Tenerife, La Palma and La Gomera, the population aged 16 and over was able to access covid serums without having to request an appointment. According to Reyero's words, the initiative allowed the inoculation of 14,100 doses, which were added to another 15,000 administered to people who were on the agendas of the Canary Islands Health Service. «The activity was not bad. In fact, on Saturday it was redirected because there was not too much influx, so it was decided to extend the appeal to minors aged 16 and over, "explained the coordinator. And it is that, initially, the initiative was directed in Gran Canaria and Tenerife to the users older than 18. «I am very satisfied with the participation. There was a large influx of young people and I would like to thank them for their collaboration, "he said.

It should be noted that, from this Monday, the non-capital islands began to immunize minors from 12 years of age. In order to continue advancing in the campaign, the entire Archipelago will hold days without an appointment to access prophylaxis during the week. The health administration will inform each day of the authorized points and the schedules. “We still do not know if this week we will begin to immunize 12-year-old children in Gran Canaria and Tenerife. It is a matter that is on the table, but we have to analyze the situation to know if it is possible to extend the appeal to this age range, "said the nurse.

This Monday, a new shipment with 88,920 units of Pfizer prophylaxis landed in the Canary Islands and next week a shipment of 12,750 doses of the Janssen product will arrive. But, is an increase in supplies expected because the Canary Islands are one of the communities with the highest proportion of young people? The answer is still unknown. “At the beginning, the vials were distributed according to the target population that was called to the campaign, so we had to compensate for this initial distribution of fewer doses. However, we still do not know if the amounts are going to increase, "added Reyero.

However, the nurse emphasized the need to continue complying with security measures to stop infections, despite having managed to acquire immunity. “The fact of being vaccinated protects us from the complications that the disease can cause, but it is not yet proven that we cannot transmit it. Therefore, even though we achieve 70% immunity, we must be cautious until we know exactly the behavior of the virus ", stressed the professional.

The president of the Council of Pharmaceutical Colleges of the Canary Islands, Loreto Gómez, assured that the Government of the Canary Islands does not have the pharmacists of the Islands to fight against the pandemic and recalled that there are almost 800 pharmacy offices “that could serve to decongest the system health, issuing certificates, performing diagnostic tests or collaborating with the patient in their performance, as happens in other communities. For his part, the vice president of the Council, Manuel Ángel Galván, asserted that the sector is capable of assuming this kind of responsibilities. "Not taking advantage of it is wasting resources in a serious health situation," he said. From the Council they recall that several weeks ago a proposal was presented to the Ministry of Health to establish collaboration guidelines and that not only has there been no official response, “but all the resolutions and communications issued obviate pharmacists and their health capacities ». | LP / DLP

The Police filed 150 complaints over the weekend for violating anticovid regulations and holding bottles. Read more

16-year-olds respond to the call for vaccination. Read more

The new restrictions apply with the requirement of the indoor covid certificate. Read more

The infected from the Islands double their social contacts in the fifth wave. Read more

7,500 inoculated doses in vaccination without prior appointment

Health reports that the vaccination teams of the Canary Health Service administered this Saturday some 7,500 doses of vaccines against COVID-19 in the authorized points in Fuerteventura, Gran Canaria, La Palma and Tenerife, for the first day of vaccination without an appointment aimed at those over 16 years of age residing on those islands.

East age group He has responded very well and with good reception to the appeal made, thus advancing in the planned schedule since his vaccination began this week.

The walk-in vaccination It has continued this Sunday in Tenerife and Gran Canaria, aimed at people born in 2005 or earlier. In Gran Canaria, the vaccination points enabled today for this call are Expomeloneras and the Pedro Hidalgo fighting ground in Gran Canaria, from 9:00 a.m. to 4:30 p.m. In Tenerife, those over 16 years of age are vaccinated without prior appointment from 09:00 to 21:00 in the Santiago Martín Pavilion and in the South Hospital of the island until 19:00.

In addition, this Sunday between 5:00 p.m. and 7:00 p.m. vaccines will be administered without an appointment at the Fairground, in the Annex to the Guajara Classroom of the ULL, in the University Hospital of the Canary Islands, in Magma), in the Candelaria Technological Center (Ctcan) and in the House of the Entrepreneur of Los Realejos.

The Canary Islands closes the week with a rebound in infections and deaths from Covid-19. Read more

These are the measures to combat the fifth wave of Covid-19 in the Canary Islands. Read more

Youth does not immunize. Read more