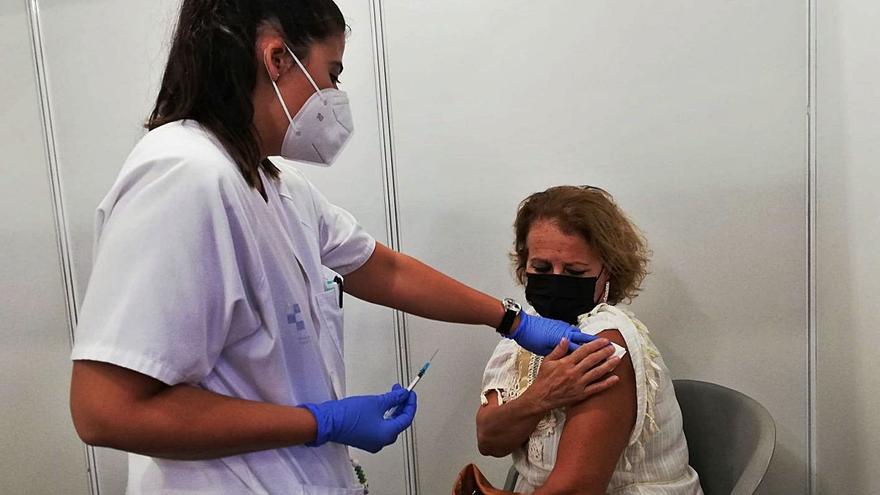 Of all the island territories, Tenerife is the one with the highest number of deaths accumulated to date, specifically 427. It is followed by Gran Canaria (270), Lanzarote (49), Fuerteventura (13), La Palma (seven), El Hierro ( four) and La Gomera (one). By municipalities, Las Palmas de Gran Canaria tops the list with 253 deaths in its demarcation; while in Santa Cruz de Tenerife there have been 195 and in La Laguna 193. The rest are below fifty deaths.

The Archipelago yesterday added 87 new cases of Covid-19 with which a total of 57,027 have been registered since the health crisis began. Of these, 1,710 are currently active. This is 48 more than the previous day when 1,662 were counted. And it is that in the last three days the number of patients in the region has increased, after several days of decline. Most of the citizens who are still infected in the autonomous community recover at home, although 217 are admitted due to complications derived from the virus. Of these, 28 are in the Intensive Care Units (ucis) and 189 in the hospital ward. On the other hand, until yesterday 54,546 patients had overcome the disease and 38 of them were discharged in the last 24 hours.

Regarding the infections detected, Tenerife registered 53 and, with them, accumulates 25,136. On the island, the tables that are still in progress are 1,112, making it the territory with the highest presence of SARS-CoV-2 in the entire region, concentrating 65% of the active cases in it.

In Gran Canaria, 410 people are still infected of the 22,752 who have done so since the start of the health crisis. This is 21 than the previous day, according to the data provided by Health. Also, Lanzarote added six positive diagnoses last day that raise its overall figure to 5,572. On the island there are still 108 citizens affected by the pathogen.

There are fewer in Fuerteventura, where 79 cases remain epidemiologically active. There, 2,390 people have been infected for more than a year, after another five infections were recorded yesterday. La Palma also added two new positive diagnoses to its statistics, which already rises to 570 accumulated, although there are eight cases that are currently in progress. El Hierro was yesterday the only island that did not add positive cases, so that its general calculation remains at 371. It is also the only territory that is free of covid. Finally, La Gomera noted another contagion, with which 235 are already accumulated, while assets are at two.

The Canarian Institute of Hemodonation and Hemotherapy (ICHH) insists on the appeal to the islanders requesting donations of blood groups 0+ and A + due to a decrease in the levels of blood banks, according to the Ministry of Health. Thus, the islands need 300 daily donations to meet the needs of hospital centers throughout the Archipelago. To facilitate access to the donation during the next week, the ICHH maintains operational temporary extraction rooms in the municipalities of San Bartolomé, Santa Brígida, Agüimes, Las Palmas de Gran Canaria (Government Delegation), Santa Lucía de Tirajana, San Cristóbal de La Laguna, Puerto de la Cruz and Tacoronte, in addition to the fixed points available in the region. LP / DLP

One death and 84 coronavirus infections in the Canary Islands in the last 24 hours. 28 people are in ICUs and 189 in hospitalization floors in the Islands due to covid-19. Read more

The Canary Islands are at the bottom of the country in giving second 'punctures' to its population. Vaccine health to 28,600 people between 40 and 49 years of age in a week, 9% of the group. Read more

The decline in the epidemic curve in the Canary Islands slows down in the last week. Cases increase in Tenerife compared to previous weeks | The revenue figure is the lowest in seven months. Read more

Graphene sows doubt. The Medicines Agency recommended suspending the sale of a brand of masks with this material in April following a study in Canada. Read more

When will the end of the masks? Health studies the relaxation in exteriors of the use of the sanitary element that has become the symbol of the pandemic, given the improvement of the indicators. Read more

A woman dies in Gran Canaria from coronavirus and 94 new cases of covid-19 are registered in the Canary Islands. Read more

Almost 100% of canaries over 66 years of age have already received a dose of the vaccine. In total, 1,188,279 doses of covid-19 vaccines have been administered. Read more

The BOE confirms that Spain will allow access to vaccinated travelers from this Monday. The new criteria require proof of having received the complete guideline 14 days before. Read more

Brawl between Darias and Ayuso. The Madrid president accuses the Canary Islands Minister of Health of wanting to promote herself to be a candidate for the presidential elections in the Islands. Read more

Consent to vaccinate with AstraZeneca does not exempt the health service of each community from responsibility. According to the Canarian jurist Isabel Aguilar "pedagogical work is missed so as not to confuse the public." Read more

Admissions to the ICU in the Canary Islands fell below half in the last month. In the Archipelago there are 30 people in critical areas, according to the Ministry of Health | The autonomous community added 130 new cases of coronavirus. Read more

The Canary Islands will not be able to open nightlife until the autonomous government gives its approval. The Ministry of Health reminds that the measures and opening and closing times continue in force according to the alert level approved on each island. Read more

The majority of new infections registered this Friday correspond to Tenerife, with 79, followed by Gran Canaria with 28 new cases, Lanzarote with 13 and Fuerteventura with 10. In the rest of the islands there have been no more cases.

20% of canaries are already immunized against Covid-19. Read more

Asked if the Government has mechanisms to force the autonomies to abide by the document, Darias has indicated that the "legal services" will be in charge of issuing it. In any case, he recalled that the Community of Madrid already warned that it would not comply with the agreement that restricted mobility at Easter and finally if it did.

In this context, Darias has responded to the President of the Community of Madrid, Isabel Díaz Ayuso, after it accused him of seeking "promotion" by "attacking" autonomy. "I think that we already have a candidate in the Canary Islands and that is what she is in, in the promotion," said the regional president.

"I have the president of the Canary Islands, secretary general of the party and a candidate, who is Ángel Víctor Torres, but in any case he will allow me. This, for me, is not politics. I do not understand in politics or in life inconsideration", Darias has affirmed, who has made it clear that he is not going to "enter" into issues where "respect" is at stake.

However, the Minister of Health has indicated that she will always bet on "seeking dialogue and consensus" and has chosen to move towards a "shared objective", that of reducing the accumulated incidence. "We are going to improve the data and continue to fight the virus, which is the only enemy. Let us work together to learn from the lessons of the past," he concluded.

The Minister of Health, Carolina Darias, has shown this Friday its confidence that the autonomous communities respect the document of 'new normality' approved in the Interterritorial Council and has warned that, if they do not do so, the Government will have to "enforce it."

This is how Darias expressed himself in a interview on Cadena SER, after the regional governments of Madrid, the Basque Country, Galicia, Castilla y León and Andalusia rose up this Thursday against the central Executive, and more specifically against the Ministry of Health.

Along these lines, the Health Minister recalled that the document is "the result of the previous work of 13 autonomous communities" and not a proposal that the Government has "put on" the table as if it did on the San José bridge last March.

"This no, this was born from a previous work in which 13 communities participated. Whoever wanted to signed up and that is why I raised it to the Council. A Council in which some Autonomous Communities asked to make nightlife more flexible by expanding from 2 to 3 in the morning. Nobody said make another issue more flexible ", has explained.

Thus, Darias has explained that her department will sign the order, which will be published in the State official newsletter and, "from there", it will study the "measures to consider". In any case, the minister has insisted that it is not a "party struggle", but "sanitary measures" that must be complied with.