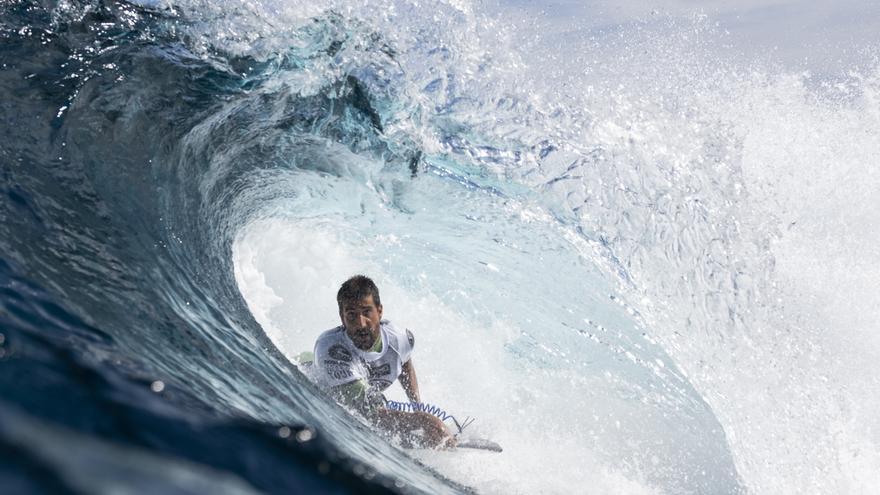 The World Cup Gran Canaria Fronton King has started with the best bodyboard show in the world and the first 16 sleeves in the open category and 3 in the female category. With the optimal conditions for sports and a blue summer sky in the middle of October, ‘La Bestia’ has once again roared in this Galician enclave to test the best maneuvers of the 64 riders competing in this edition, totally safe and with a demanding protocol to comply with all health and hygiene guarantees against covid-19.

On this first day, boys and girls have tried the powerful wave of El Frontón with some first rounds full of spectacle and heart attack maneuvers, incredible waves that were the scene of tubes, 360, blackflip and jumps on the crest of locals and internationals on a Sunday at 25 degrees marked by healthy sportsmanship.

Argentina, Chile, Colombia, Portugal, Ireland, United Kingdom, Venezuela, Peru, France and Morocco Just some of the countries have been represented on the opening day of El Frontón, which takes this corner of the Gáldar coast throughout the globe through sport.

The riders started the morning in the open category, in a first action inaugurated by the French Maxime Castillo, who led the sleeve with a victory adjusted to the premises Gabriel Molina and Pablo Hernández. Several of the most recognized riders of this championship also tested the Galician wave, such as Guillermo Cobo with 9.90 points, Jonathan Vega with two outstanding waves that put him at the head of his sleeve, a great performance in the water of Borja Granados with a 7.5 and a 6 in his best waves and a heat that put in check Aitor Ojeda Y Javier Dominguez with a very close score between the two.

He shone in his confrontation with ‘The Beast’ the canary Omar marrero with an 8 in a perfect and very long tube that raised the competitors watching the sleeve to their feet and raised applause from the audience. The heat that Marrero led was one of the most attractive of the morning, with 14 points for the maneuvers of Samuel Brito, in a score only surpassed by Eduardo Rodriguez, with two waves of 7 and 7.6 that gave him the victory of his sleeve.

The first waves of this test, the only professional bodyboard event that is held, also premiered, some of the winners of previous editions in their climb to the title, such as William Luján, Dailos Rodríguez, Alex Sebastian, Daute Perdomo, the three times King of the Fronton, Amaury lavernhe, or also French Pierre Louis Costés that in the last edition starred in a final that was decided in the last minutes.

This edition is also the debut of some rider who try their luck in the northern enclave of Gran Canaria at a professional level, in a face to face with the Galician wave to which bugueros have appeared today as Rachid lorenz from Lanzarote, the French Fabien Thazar, or english Daniel Skajarowski among others.

In addition, during the morning and for the first heats of the day, the Fronton King has in turn been an outdoor set, making history as the first nationally televised professional bodyboarding championship, through Televisión Canaria from 12 a.m. to 1.30 p.m.

This event follows a strict security and prevention protocol to convert the space and the test into a safe environment and with all the hygienic and sanitary measures against covid-19. celebrating without public and with access control, disinfection, thermal controls, specific signage, mandatory use of a mask, and ‘bubble’ groups for competitors, among others.

Face to face in females

The girls also tried the wave of El Frontón today in the first heats of this 2020 edition, which have been played in a face-to-face format which has added excitement to the first rounds of the women’s category. In these duels, the two brilliant right-wing ‘rolos’ of Teresa Miranda, in addition to a backflip or a backflip of the current champion of the championship, the canary Alexandra Rinder.

The Queen of the King Fronton, Alexandra rinder, maintains its fight to revalidate its title with powerful rivals such as Teresa Miranda, the Tenerife Texenery Garcia and the Venezuelan Begoña Martínez. The Latina, which is the first time competing in the Fronton King, has not been able in this first round with the veteran of the Austrian, who prevailed in her face to face with 12.5 points, the highest of the day in women , followed by 11.75 accumulated by Teresa Miranda in his first performance.

The World Cup Gran Canaria Fronton King 2020 is organized by Epic Events, promoted by the Cabildo of Gran Canaria through the Tourist Board of the Cabildo de Gran Canaria and the Insular Institute of Sports, who once again frames this test in his program of Major Sports Events in Gran Canaria, just like him Gáldar City Council, institutions that have made it possible to consolidate this sporting event as an international benchmark in the world of bodyboarding. This event is sponsored by Naviera Armas, NMD / CO, Red Bull, and the collaborating firms, Jacio GuestHouse, Sonocom Audiovisuales, Hydro Flask, Aguacana, Meduxa Mag Y Vert Magazine.