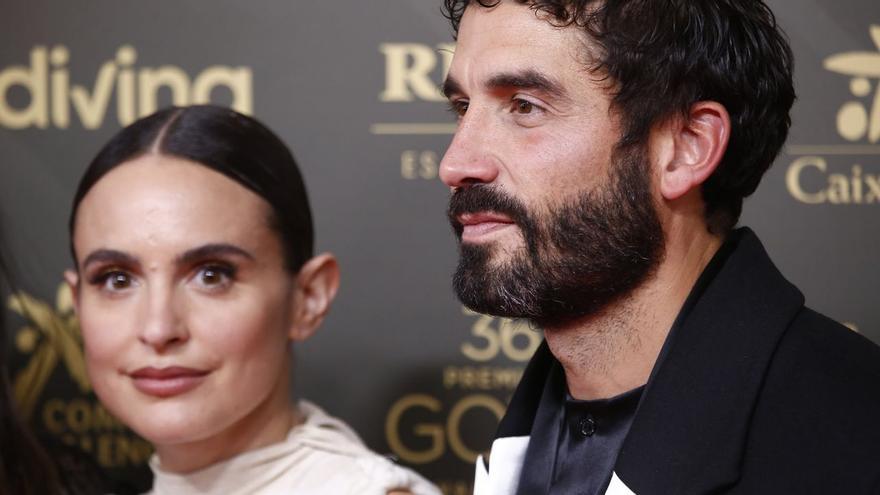 They investigate the actor from Tenerife Alex Garcia for acquiring a false Covid passport. Agents of the National Police are developing a new phase within the framework of the operation Jenner against fraudulent registrations in the Covid-19 Vaccination Recordwhich currently amount to 2,200, Among them are actors such as Verónica Echegui, who received a Goya award last Saturday, and her boyfriend, the actor from Tenerife, Álex García; television contestants like Abraham García or aluniceros like the trollpolice sources have reported.

In this new phase, the names of the actress Fernández de Echegaray, better known as Verónica Echegui, 39, famous for starring in the film I am Juani and which received this Saturday a Goya Award for Best Fiction Short Film Wolf Totem.

Her boyfriend, Álex García, would also be involved, who also participated in the Goya Gala in Valencia, an event in which it was mandatory to present the Covid passport by regulation of the Valencian Community and the television contestant Abraham García, winner of the program survivors in 2014.

On the other hand, two aluniceros are being investigated: the troll Y Bosch. The first, Ismael AV, also nicknamed as The Ishma, was arrested last March for stealing, in collusion with the carrier, a truck with mobile phones and tablets valued at 4 million euros. He is 39 years old, has dozens of police records and has become the successor to the murdered 'alunicero' Saez kid.

For his part, Rubén SA, alias Boscha 34-year-old from Vallecano, was known years ago by the National Police because he commanded car thieves in dealerships and also clothing and other luxury items, embedding cars in stores on Madrid's 'Golden Mile'.

Likewise, according to the same sources, other of those investigated would be related to ultra fans of Real Madrid and Barcelona FC such as Antonio MM, The boy and Ricardo M., from Los Boixos Nois, convicted of homicide and drug trafficking. Other people from the world of cinema, music, sports and finance would also appear.

The operation has concluded with the arrest of four other people involved in the Spanish branch. Those arrested acted as intermediaries, capturing 600 people investigated for illegally obtaining the complete vaccination schedule., adding for the moment a total of 2,200 fraudulent registrations in the National Vaccination Registryresulting from the previous sum.

The police investigations that had begun last January with the first phase of operation 'Jenner' had led to the dismantling of the Spanish branch of this criminal organization with the arrest of seven people, as alleged perpetrators of the crimes of document falsification and against public health. Among them a nurse from a Madrid hospital who has denied the facts and has assured that the keys were stolen.

The agents then verified the fraudulent registration of 1,600 people in the National Vaccination Registry, after verifying the involvement of health personnel who introduced unvaccinated people who obtained a QR code to obtain the certificate of the complete guideline against Covid-19.

They captured businessmen and anti-vaccine groups

The agents continued with the investigation in order to identify new people involved, ending with the arrest of four more people between last week and this week who acted as intermediaries in the criminal network.

On the one hand, among the detainees is a woman, who captured businessmen from different parts of the national territory and other anti-vaccine or denier groups who do not want to be vaccinated but want to move around Europe and Spain without problems. Apparently, they paid between 200 and 1,000 euros for a Covid certificate or passport through cryptocurrencies.

Likewise, also working as intermediaries, the other three arrested managed to capture 600 clients so that they could be illegally registered as vaccinated. As a result of the investigations, the illicit use of other passwords other than those investigated in the previous phase, with which these new clients would have been registered, has been verified.

This phase, called operation 'Jenner', is based, therefore, on the importance and seriousness of the illegal entry in the National Vaccination Registry to register as vaccinated people who are not.

So far, the investigation therefore adds up to eleven people arrested as allegedly responsible for crimes of false documents and crimes against public health, accumulating a total of 2,200 investigated for having obtained the COVID passport fraudulently.

The operation, which began with a first phase in which it was possible to determine the relationship with French organizations due to the falsification of QR codes, continues with a final and third phase focused on making the arrests of the main members of the organization.

Familiar faces among those investigated

The first phase of the operation, which was announced on February 25, included among the investigated by the Police as the alleged benefactor of an illegal Covid passport to Omar Montes. In fact, as confirmed by the same sources, the singer appeared this Monday at the Moratalaz police station for this matter, despite the fact that he told the press that he had gone to renew his ID.

Among others investigated appears Ana María C., better known as The Queen of Coke, who managed to sell 100 kilos of this drug in one year and has been arrested many times, the last one in 2014. There is also the once famous hallucinator and butronero SRG, known as Moli. The old criminal, also related to drug trafficking, killed a person on the run and spent a few years in jail.