After this brief explanation about the project, we got into teams to solve our first challenge (which I will not reveal in case you dare to sign up for the Open day). Just a preview: to find the solution, the collaboration of the entire team is essential. A sample of the philosophy of 42.

Once overcome, next challenge. We each got on a computer and opened a file with the instructions. Our only allies were the companions around us and Google. They warned us: “The chairs have wheels so that you can move around the space and talk with the rest of your colleagues.” What good advice! The exercise was based on the Linux programming language and a command had to be executed. It is clear that having knowledge of programming was a considerable advantage. So after sitting in front of the screen and Google did not clarify all my doubts, I rolled to the sites of my colleagues, but could not clarify myself. I spoke with my partner on the right, Carmela. She studied law and had come to prove why her son had been in 42. We tried to help each other, but we were a bit stuck. Javier noticed this and came to explain what he had found out. In turn, Alberto had explained it to him. We were about to figure it out, but… time’s up. If we had had more time, I’m sure Carmela and I would have made it. At the end they threw us a question: How have you been able to advance? And almost in unison we all said: with the help of our partner.

The experience of the students

There are no books, no teachers and it is open 24/7. A totally revolutionary methodology, but who decides to enter and learn, it is because they really want to. And free. An opportunity both for people who want to train in programming and reinvent themselves in the jobs of the future. Also, a lot of pineapple is made. I approached a group of four young people who were on campus to tell me about their experience and find out how they ended up there.

Raúl, who knew 42 From an article in the newspaper, he had studied a higher degree in robotics. A priori it seems that it may be related but the young man assures us that it is not. “In 42 everything is very gamified, it is like a video game and you go through levels”. Once the swimming pool period has passed, you become a student and have a series of core challenges, common to all and once that is overcome, there are ramifications that would correspond to the specialties: artificial intelligence, big data, cybersecurity … Once you have passed the main part, you can go to another of the campuses in the world: Paris, Rome … All the campuses are interconnected and feed back each other. 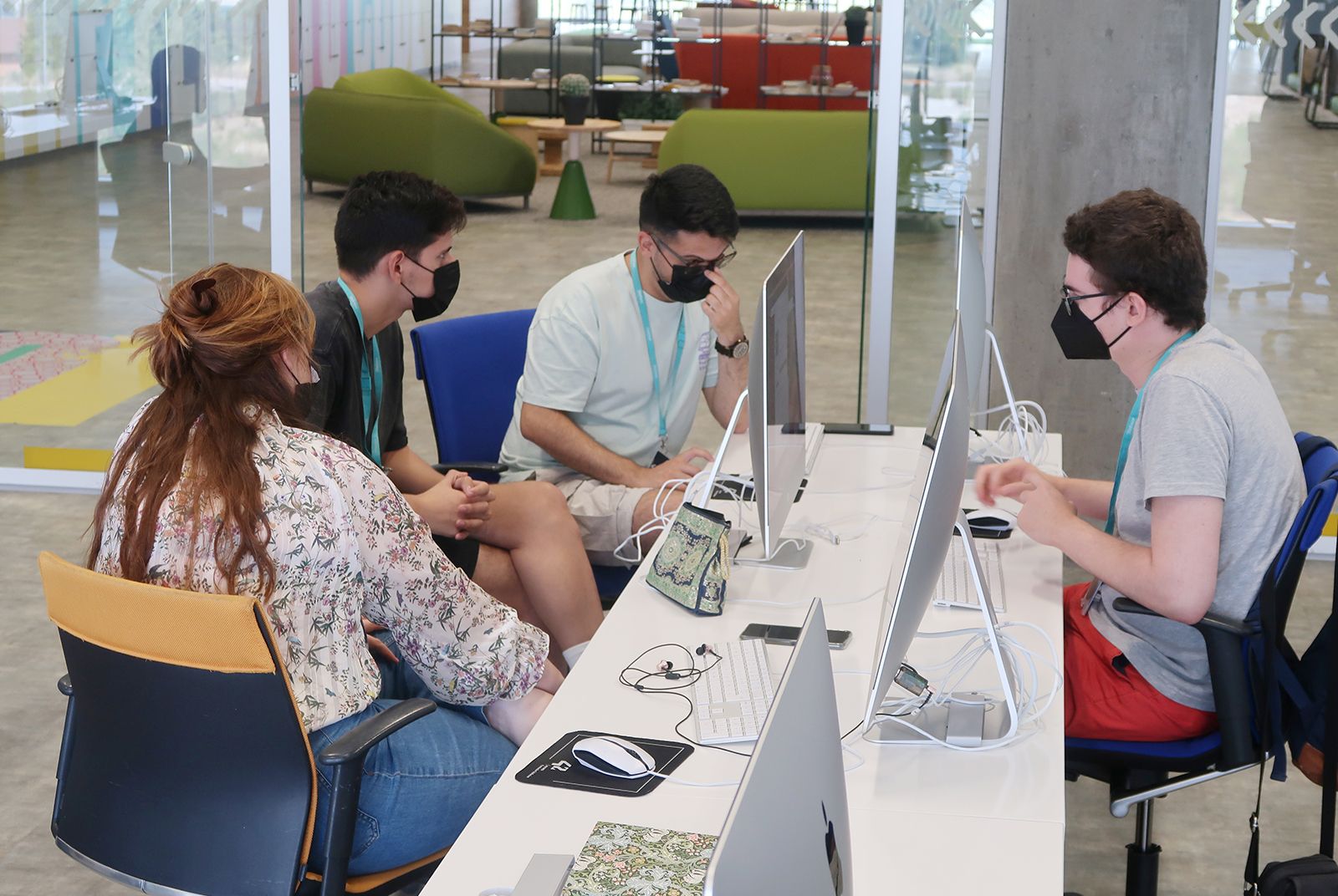 Javi decided to leave Galicia and move to 42 Madrid. When he finished high school, he took a year off to decide what to do with his life. He was looking at colleges and came across 42. He has been here for a year and a half and acknowledges: “I am delighted, I enjoy my colleagues, the environment and I love spending hours here.” The schedule is free, you decide the time you want to spend. For example, Javi spends an average of 9 hours a day. But among his colleagues there are 7 hours and another 12. “How flexible it is depends on you and what you want to advance. Everyone has their own rhythm and it is possible to make it compatible with work ”, he admits. There is an area with bunk beds for people who need to take a break. If you spend many hours one day, it is also necessary to rest for a while to continue performing.

For his part, Alejandro, who had been trained as a photojournalist, admits that he only knew a couple of things about layout, he has learned zero since he started in July. “What 42 does very well is that it makes you see that there are a thousand ways to solve challenges, you adapt to the methodology and the methodology to you.”

Manu, who came from the world of design until he decided to try his luck on campus, recognizes that being with people makes you more motivated. In addition, “you learn to remove fear and manage frustration.”

Now we have to admit that yes, they have convinced me that I could program. It is not trivial, you have to dedicate time and effort, but I know it could. There are no clumsy or good people, there are motivated students eager to absorb knowledge. And it is that all the formations of 42 they are focused on the employability of the future and the campus is a unique opportunity.

If you are interested, you can enter and register to take the tests of 42 Madrid and become one more student. It is completely free.