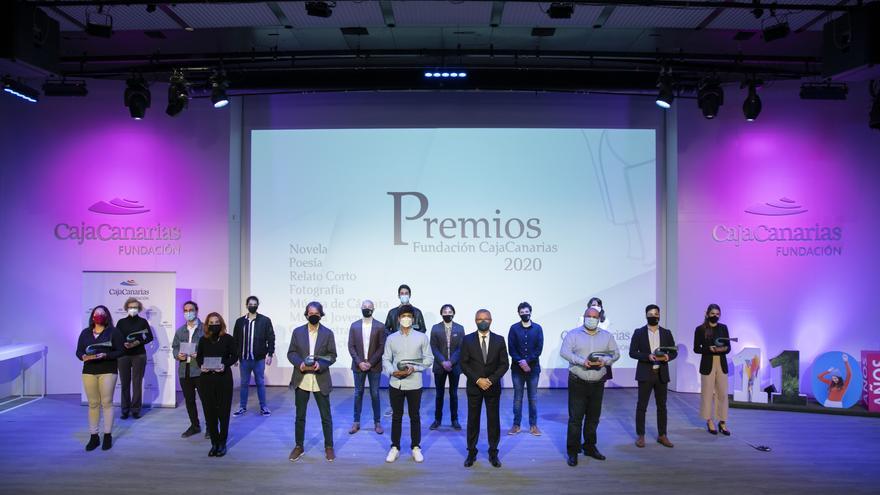 The CajaCanarias Foundation has opened the deadline for submitting your 2021 Awards, a call that, over the last decades, has been one of the most outstanding activities of the aforementioned entity and whose objective is to recognize the creative talent of artists, writers and researchers.

In addition, these recognitions serve as a platform and impetus to continue and strengthen their respective trajectories. The period covered is established between April 22 and 26, depending on the award that is chosen, as the deadline for the presentation of works and registrations to the different modalities called in this year. The participation bases of the nine modalities of the 2021 Awards can be consulted at the link www.cajacanarias.com.

All those persons of legal age, natural or resident in the Canary Islands (with the exception of the young music section, open to minors with authorization from the corresponding legal guardian, from 15 years old), except those who they would have been winners of the award to which they choose in previous editions. This year’s call aims to discover and recognize new literary works of novels, poetry, short stories, music, photography, documentary and fiction films, plastic arts, studies on Social Sciences, Law and Economics, as well as music for the public more young man.

The most prestigious novel award of all those convened in the Archipelago will reach its thirty-seventh edition this year and establishes a single award, endowed with an amount of 6,000 euros. The work must remain unpublished until the jury’s decision is made public, as well as have been carried out in the last two years, and only one work per author may be submitted. The novels must be written in Spanish, with an extension of no less than 55,000 words and the subject will be freely selectable. The deadline for submitting the manuscripts that opt ​​for the contest ends at 2:00 p.m. the next day April 23rd.

As in previous editions, this consolidated poetic contest, organized by CajaCanarias since 1981, maintains a single award, endowed with 3,000 euros. The poems must be written in Spanish, with a maximum length of 700 verses and a minimum of 350, having been made over the last two years. In the same way as the narrative award, the delivery deadline is established for the April 23rd, until 2:00 p.m.

To this award, which in this edition is convened at the singing mode and increases the endowment of your prize to 6,000 euros, Interpreters born or residing in the Canary Islands of legal age and who are not over 36 years old on the day of the start of the tests will be able to choose. On June 16, 17 and 18, the different sessions of the competition are planned to be eligible for the María Orán Music Award, to be held at the CajaCanarias Cultural Space in Santa Cruz de Tenerife, and the registration will remain open until the next April 26, via www.cajacanarias and in which it will be necessary to provide, among other issues, the detailed program with approximate global minutes, as well as the scores.

The competition tests will consist of a knockout phase and a final, both of a public nature. The knockout phase will have a maximum intervention time of 20 minutes. Contestants will perform a free choice opera aria; a German lied or French melody, also of free choice; as well as a song by Canarian author, the works must be included in general score format.

The intervention time in the final phase it will be 30 minutes. An opera aria will be performed; an oratorio aria, mass, cantata or motet; a Spanish song and an aria or romanza of the Spanish lyric theater, all of them of free choice. It should be remembered that all works must be interpreted in the original language and from memory, with the exception of the oratory.

The CajaCanarias Foundation will make available to the contestant who requests it, one or an accompanying pianist with whom they can perform a rehearsal prior to each of the tests, of 25 minutes for the eliminatory and 40 minutes for the final. In addition to the cash prize established for the winner of the María Orán Music Prize, you may receive a additional amount of 1,500 euros as a cache for an audition or recital, to be held within the framework of the CajaCanarias Foundation’s annual programming.

The presentation format used for four years for this contest is repeated, one of the oldest in the catalog of awards that the CajaCanarias Foundation annually announces. Thus, a single award is established, endowed with 3,000 euros, to recognize a collection of short stories, written in Spanish; The total length of the volume can range between 26,400 and 39,600 words, and the participants in this category, in the same way as in the Novel and Poetry awards, must submit their work before 2:00 p.m. the next day April 23rd.

The film contest called in the CajaCanarias Foundation’s annual awards catalog maintains its two usual modalities: fiction and documentary, with free themes in both categories. The short films may be presented in any dvd / bluray format approved in our country, with a duration not exceeding 30 minutes and with a production date after January 2019, opting for two prizes endowed with 3,000 euros each. The deadline for submission, in this case, ends on April 24 and the works must be physically delivered to the CajaCanarias Cultural Spaces in Santa Cruz de Tenerife, La Laguna, Garachico or Santa Cruz de La Palma, from Monday to Saturday and between 11:00 and 13:30.

Also of thematic, modality and free technique, artists, natural or resident in the Canary Islands, over 18 years of age may attend. Each author will present a photographic series composed of between four and eight snapshots. The photographs submitted must have been taken in the last two years and cannot have been awarded in any other contest, exhibited in any exhibition, or published in books, catalogs or web pages. A single prize will be awarded, endowed with 3,000 euros, as well as the CajaCanarias Foundation will offer the winner the opportunity to carry out an exhibition, which would take place in one of its Cultural Spaces, and the snapshots must be submitted to the contest in digital format through the website www.cajacanarias.com , as well as they must have a minimum resolution of 300 dpi, in jpg format, a maximum file size of 20 Mb and a size of the photograph where the sum of the base and the height does not exceed 100 cm.

The CajaCanarias Foundation consolidates in its Awards agenda this music contest that, from this third edition, It is renamed Alberto Delgado in memory of the president of the entity, recently deceased. Musician by training and director-founder of the well-remembered Coral de Voces Blancas de Santa Cruz de Tenerife, Delgado developed an enormous work of support and musical promotion throughout his life and professional career, being the promoter of some of the most festivals and performances remembered in the regional panorama.

Young Canaries and residents of the Canary Islands, aged between 15 and 35, and in solo format or in groups that do not exceed six components, open to genres of music ranging from pop, rock, rap, will be able to attend the contest. , hip-hop, even the author’s song, reggae, soul or blues, among others.

Participants must present three musical themes of their own and original authorship, recorded in mp3 format and together with the documentation required in the bases, exclusively through the website www.cajacanarias.com, before the April 26 (2:00 p.m.). To qualify for the Alberto Delgado Young Music Award, you must not have a record contract in force until the final performance is held, nor do you belong to two different groups submitted to the contest, as well as a minimum repertoire of ten songs.

From all the proposals submitted, the jury will select the groups and / or soloists that will participate in the final phase, to be held on June 4, starting at 7:00 p.m., at the CajaCanarias Cultural Space in Santa Cruz de Tenerife. Each group must interpret the three themes presented in the contest, being able to include original compositions in the repertoire until the time limit for intervention is completed. This year’s award amounts to an endowment of 3,000 euros and, in addition, the winner will be able to receive 1,500 euros as a cache for an audition or recital, to be held within the framework of the CajaCanarias Foundation’s annual program.

Researchers who are in possession of the title of doctor at the time of presenting themselves to this call may attend, either individually or in groups, linked to official research centers located both in the Autonomous Community of the Canary Islands and outside it. Likewise, it is established as a condition to be natural or resident in the Canary Islands, allowing in the case of research teams that at least one of the members meets this condition.

The deadline for delivery of the works that opt ​​for this award is established on April 22, and a single prize will be awarded, endowed with 3,000 euros. The research, which must be original, will have a maximum length of 22,000 words, among other conditions, and the research topic must be framed in the area of ​​knowledge (ANEP classification) related to Social Sciences, Law and Economics, focused directly on the advancement of society in general through the creation and renewal of studies linked to the subareas that make up these sciences.

The works that compete for the CajaCanarias Research Award must be original, in addition to having been published in magazines / editions related to the area of ​​knowledge in which they are registered. Likewise, the research carried out must have been concluded in a period not exceeding the three years prior to the date of this call.

One of the main novelties in the CajaCanarias 2021 Awards call is the return to its catalog of this prestigious award which, in this edition, carries a single award endowed with 6,000 euros. The subject, the modality and the technique of the works in the competition will be freely chosen by the author and must be unpublished, carried out over the last two years and not awarded in any other competition, exhibited in any exhibition, or published in books , catalogs or web pages.

Each participant must present two original works that cannot exceed 150 centimeters in any of their dimensions. The deadline is set on April 24 (2:00 p.m.) and delivery can be made at the CajaCanarias Cultural Spaces in Santa Cruz de Tenerife, La Laguna, Garachico and Santa Cruz de La Palma, from Monday to Saturday and between 11:00 and 13:30.