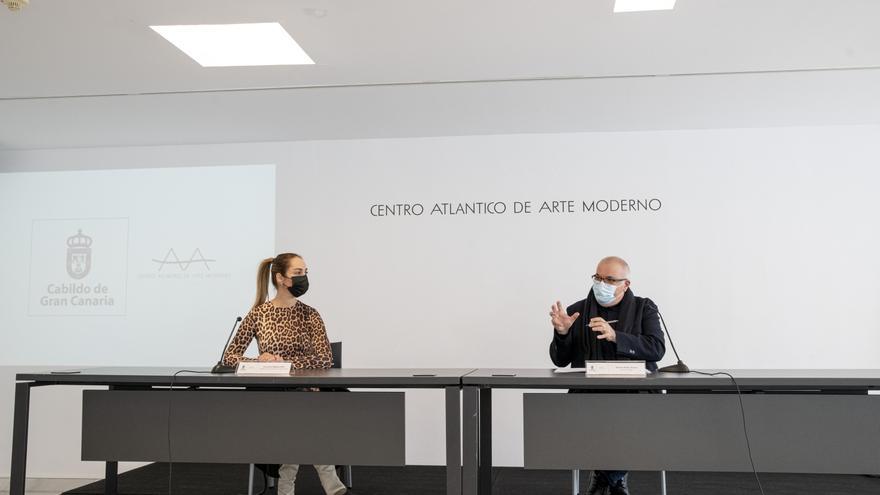 The Atlantic Center of Modern Art opens a new season with an eye on art as the exhibition axis of sustainability and respect for the environment. Through the alternative focuses proposed by this course, the entity brings nine exhibitions, among which the sample Down to Earth. In addition, the international and insular seal is combined in the retrospectives dedicated to the disappeared Canarian artist Juan Hernández and the African Myriam Mihindou. Based on the latest incursions, the CAAM maintains a series of multidisciplinary activities, conferences, workshops and publications that will not only remain at its headquarters but will also be carried throughout the island.

The exhibition program begins in February with the exhibition Human, all too human of the iranian artist arita shasrzad. The sculptural project with architectural resonances drinks from the philosophical tradition. From Tehran to the Canary Islands, the pieces are traveling right now to arrive in time for the inauguration of the curator Carmensa de la Hoz, which will be placed in the space CAAM-San Antonio Abad from February 17 to May 29. The artist has a long history in which she reflects on traditional culture and has taken her to Madrid, New York, Cairo, Belgium and France.

At the main headquarters of the CAAM, of the May 6 to September 4 and once the works for the renovation of the electrical and lighting system of the building on Calle de Los Balcones are finished, the figure of the island painter returns John Hernandez. Died in 1988 in a traffic accident at only 23 years of age, he was considered one of the figures with the "greatest international projection" of the Islands of the sixties generation, in the words of the director of the CAAM Orlando Britto. In order to safeguard his work, "which appears forgotten", the tour John Hernandez, curated by Carlos Díaz Bertrana, will be nourished by the paintings of this young man who, with his sights set on New York and the avant-garde, had already been an active member of artistic circles and winner of several distinctions.

On the first two floors, the CAAM will show the public from May to September the theater of memory, from the African artist Myriam Mihidou, born in Gabon and resident in Paris. Curator Lucie Touya compiles a selection of works in which he explores the union between collective memory and African history. Raised on horseback between two cultures that converge and remain distant at the same time, the artist reflects on identity and territory through her body.

Closing the cycle of retrospectives, from May 12 to August 28, the CAAM pays tribute to Manolo Millares at the exhibition Tribute to Thousands articulated with works from his collections, coinciding with the 50th anniversary of the death of this famous artist from Gran Canaria. The exhibition will include works in burlap, paintings, drawings, engravings, videos about the artist and a selection of publications about his life and work, as well as round tables that are expected to be attended by the widow and fellow artist Elvireta Escobio.

Sustainability in the modern museum

"Our thematic research project delves into sustainability, as the planet is suffering the effects of climate change," Britto recalled. The exhibition Down to Earth plays with this double meaning and transfers the works of national and international artists to the second exhibition block of the year. From September 22 to December 11, the curator Blanca de la Torre will bring together various firms that will work on one of the CAAM's most ambitious projects, both in scope and content, since it will occupy three of the four floors of the main headquarters.

In parallel, the CAAM Sustainable Classroom continues its activity this year with new conferences and actions linked to art, culture and sustainability. This Classroom, coordinated by Blanca de la Torre, is the first think tank or permanent laboratory of ideas launched by a Spanish art center around contemporary creation and sustainability. The initiative seeks to promote from culture the search for effective sustainable proposals that contribute to changing the current social model.

Artistic residency, only in Gran Canaria

Coinciding with this international exhibition, the main headquarters of the CAAM hosts on its third floor the samples of the two artist residencies that the art center will organize, for the sixth consecutive year, through a public call aimed at artists from the Canary Islands. The work of the residences will take place from September to October and its result will be exhibited between October and November. Due to the reduced budget in these two years of pandemic, the institution explains that it is concentrated on the island of Gran Canaria.

The second public call that the CAAM reactivates in 2022 is resume space, aimed at artists from Gran Canaria under 35 years of age. As usual, the center will select a group of young art talents to exhibit their work in a collective exhibition that will take place from June 16 to September 18, at the CAAM-San Antonio Abad. Resume Space is a project born in 2017 that aims to promote and make visible the work of young artists.

At the end of the year, the art center hosts, from November 25 to December 11, a new edition of another collective exhibition, CAAM Territory, which brings together works by students from the Gran Canaria School of Art and Design. On this occasion, in the 22nd edition of this project, the students of the School present works inspired by works in the exhibition on the second floor of the CAAM headquarters With feet on the ground, which focuses on the sustainability of the Planet.

The exhibition program for 2022 puts its final touch in the CAAM-San Antonio Abad space with another interesting individual exhibition, The desire never ends, by the artist from Gran Canaria Moon Bengoechea, a creator who, despite her youth, already has a proven professional career in the field of contemporary art in the Canary Islands. His project, created expressly for the CAAM, addresses the problems of the modern food industry that are perpetuated in an environment in which society has lost contact with its origins, with the natural environment and with the origin of food. His exhibition will take place from October 6 to January 29, 2023.

The Minister of Culture of the Cabildo de Gran Canaria, Guacimara Medina, who led the presentation together with the director of the CAAM, Orlando Britto Jinorio, highlighted the strong presence that the binomial continues to have culture- sustainability in the contents of the new programming, while highlighting the commitment of the CAAM to continue transferring cultural activities to the municipalities of the Island. In this sense, he announced that the CAAM will return for the second consecutive year to collaborate in the organization of the project Looseness which in 2022 will be held in Valsequillo.

Medina reaffirmed his commitment that all cultural spaces in Gran Canaria, including the CAAM, will continue to work to the society service and promoting from culture new vehicles of knowledge capable of providing citizens with tools that contribute to generating lines of analysis and critical thinking.

The Cabildo de Gran Canaria, the institution that supports the functioning of the CAAM, allocates this year to its budget a total of €3,272,660, identical amount to the previous year. In the chapter on investments in exhibitions and activities, the center will have an item of 623,460 euros, while in the case of personnel the 1,522,660 euros will remain. "We hope that we will soon return to the amount prior to the pandemic, of 2018, when the budget was around 900,000 and one million euros", stressed the director Orlando Britto.

In the current context of the pandemic, the art center of the Cabildo de Gran Canaria maintains the health security protocols active and has articulated the new programming, subject to regulatory changes that may occur in the coming months. Despite the difficulties, Britto commented that even reconfiguring and delaying planned exhibitions several times, "the schedule will be met on date and time; everything will be done".

Atlántica, a magazine to reflect from the insular to the global

As to Atlantic. Magazine of Art and Thought, the director of the CAAM announced that tomorrow, Friday, numbers 1 and 2 of the new stage of this digital publication will be published, in its original version, with texts by authors from different parts of the world and in their language of origin, "who will reflect from the Canary Islands on the native and ephemeral". In this way, the public will have free access to this new content on contemporary art from the page caam.net and on the magazine's own website, www.revistaatlantica.com. These first issues revolve around the concept of the indigenous and are the result of the joint curatorship of Ticio Escobar and Gabriela Salgado, members of the new editorial board of the magazine, who, as editorial coordinators, have been responsible for choosing the conceptual framework of work and the selection of contents.

Sustainability surrounds the rest of the proposals