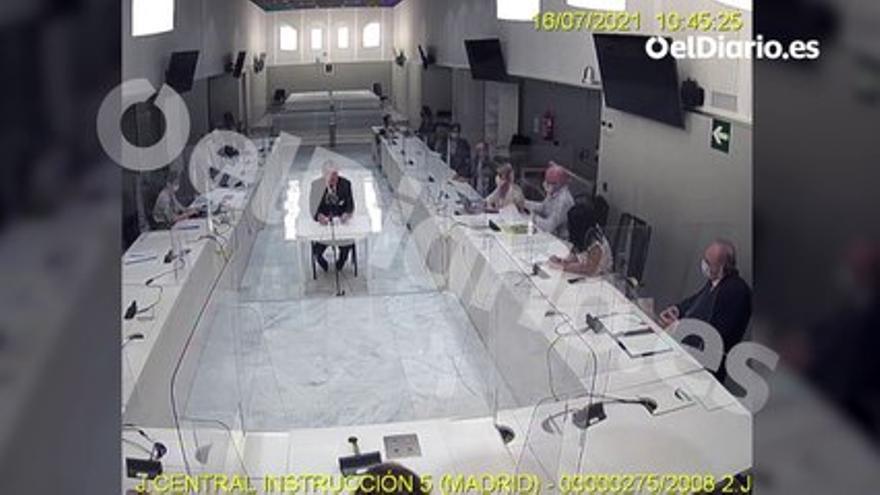 The former treasurer of the PP Luis Bárcenas described on July 16 in the National Court his work and that of the late Álvaro Lapuerta in box B of the party as intermediaries between the builders who wanted to have access to the ministers of the branch, mainly Development and Environment Ambiente, in exchange for an amount of black money for the parallel accounting of the training, as appears in the video of the statement, to which he has had access elDiario.es.

“It was a public relations concept. I do not know if in the world of lobbying in other countries where it is legally admitted how things work but it may be something similar to what we did. In the end in that world, getting a minister or secretary of state welcome you is not easy. Simplifying, and even if it was not our approach, that is worth money anywhere, “says Bárcenas to questions from the representative of the State Attorney, Rosa María Seoane.

The head of the Criminal Section of the State Lawyers’ Office tried to get Bárcenas to specify who was participating in that plot. Bárcenas responded that the Ministers of Development and Environment and their secretaries of State from 1996 to 2004 without specifying names. These positions were filled, with regard to Development by Rafael Arias-Salgado and Francisco Álvarez Cascos; and in the Environment portfolio by Isabel Tocino, Jaume Matas and María Élvira Domínguez.

Bárcenas describes how on one occasion, Lapuerta connected one of the businessmen with a general director of Highways, to the anger of Álvarez Cascos, Minister of Development. “The minister has a somewhat harsh conversation with Alvaro to recriminate him for calling a general director and not him and forbidding him to address any person who depends on him. Somehow he closed the door so that he could address any member of the administration below him, ”said Bárcenas. The ex-treasurer of the PP later added that in the event that the businessmen were interested in the autonomous communities of the PP, Lapuerta would connect them directly with the president of the region.

Luis Bárcenas testified before the judge who instructs the line of bribery of businessmen in the case of box B, Santiago Pedraz, by a letter that he presented last February and in which, for the first time, he alluded to finalist donations beyond the one that had already denounced in 2007 for the autonomic campaign of María Dolores de Cospedal.

However, before the judge he said that he could not specify anything specific about those finalist donations because it is documentation that was stolen during Operation Kitchen in his wife’s study and that, according to him, the accused commissioner Andrés Gómez Gordo hides, current head of the Madrid police station in Villa de Vallecas and former adviser in Castilla-La Mancha de Cospedal.

Regarding this stolen documentation, Bárcenas said: “The concept of expenses were electoral, mailing, printing, a series of concepts that at that time were not financed by the electoral law and that had a very high cost and required additional nodes to those that were officially contributed in the campaign. Specific actions were taken to get certain donors to deliver these documents. What was contained in that documentation is who gave the money, the amount and what was applied ”.