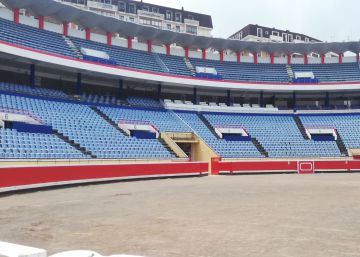 The Big Week of Bilbao already knows the posters. It will be the last exercise in charge of the Administrative Board, since in the coming months the new coso businessman will be known for the next fifteen years. It will be the last, but with the same signature as in previous years: two afternoon toristas on the first and second Sunday, a Monday for young bullfighters, the figures together on four posters from Tuesday to Friday, the second Saturday with a hangover and the opening with Hermoso de Mendoza. A structure that has been repeated in Bilbao for quite some time and the changes are for when the new ones arrive.

The traditional people of Bilbao will miss the fact that they talk about the protagonism of the bull, with too many cousins-sisters. Without figures in the afternoons of character torista, with the right-handed shielded in their favorite irons where the amateur is already tired of seeing them.

"We are a torist fair and, in addition, there are all the figures; We believe that with the incentives for people to go to the lines, "said Alfonso Gil, Lieutenant-Mayor of Bilbao, who yesterday opened his new position as general manager of the square. However, in the presentation made in the halls of the Plaza de Toros Vista Alegre hardly spoke of breeding and yes of repetitions of the figures. It is for what is now the fair that was crowned as the center of the bull-bull.

If it is a cycle with few flashes that paralyze bullfighting August, as in those glittering years already in the memory, it is also true that every day the fan will find an incentive to go to the square. From the afternoon of the victorinos, with Curro Díaz, the goodbye of El Cid and the awaited Emilio de Justo, until the star poster of the big day – Friday – with Urdiales and Roca Rey, the two big doors of last year, next to Ureña , the winner of San Isidro. Pablo Aguado appears perfectly wrapped up by Enrique Ponce and El Juli, in his only presence in Bilbao, with the cattle of Garcigrande for the umpteenth time for the Spaniard.

The favorites of the Bilbao public, Enrique Ponce and Diego Urdiales, will compete one afternoon with Ginés Marín before the controversial Zalduendo bullfighters, who caused a rejection only slowed down by their success in Madrid. There will also be Antonio Ferrera, Manzanares and Roca Rey in the run of Victoriano del Río. The afternoon of the youngsters is for Román, Luis David and Álvaro Lorenzo, who will play with the always interesting 'torrestrellas' of Álvaro Domecq.

Yes it has been a surprise the inclusion of Finito de Córdoba, always controversial in his paseíllos in this square, and that will open the sign of Fuente Ymbro that complete Juan Leal and José Garrido.

On the contrary, David de Miranda is the most outstanding absence. "He has been offered to come, but he has not squared and it has not been because the company did not want to bring it," explained Alfonso Gil. Everything indicates that the Huelva did not want to enter one of the first signs of the cycle and will be the first replacement if there is an unexpected replacement. Another absentee is Miguel Ángel Perera, who also did not approve of the proposal made by the company.

Someone will miss Morante, who has not been well in his late afternoons in this square, or Pepe Moral, right-handed who rayed at high altitude a year ago. "We wanted all those who cut ears in the past cycle, like Adame for example, and Pepe Moral, who did not manage to do it was good, but it has been necessary to choose and prioritize in this way", analyzed the members of the Administrative Board.

In a year marked by the novelties that Madrid threw, it was expected some poster with its own seal, but sources of the company assured that they have not been able to sign a heads-up full of rivalry or fix a figure with a iron player for refusal of some right-handed, what remains, undoubtedly, incentives to the cycle.

The rumor about a possible presence of José Tomás in Bilbao also monopolized comments. "We all want to have it, but it is José Tomás who decides where he acts and we can not do that anymore; He did not want to come here or to San Sebastian and the rest is not in our hands, "said Manuel Chopera.

One of the disappointments is the afternoon of rejoneo that will open the General Runs with the same poster of the past year: Pablo Hermoso and Lea Vicens with Guillermo Hermoso, now already alternative. "We had to choose another year and if we look at the season, I think we are doing justice," clarified Alfonso Gil.

The posters are the following:

San Sebastián, with figures, but without Ponce

In the days before the General Runs of Bilbao, the fair of San Sebastian will be held, with four celebrations marked by the presence of the main figures and the absence of Enrique Ponce, a sign in the Illumbe arena.

The company BMF, of the Mexican group BAL and Casa Chopera, will open the cycle on August 14 with the same list that seven days later will be cited in Bilbao: Antonio Ferrera, Manzanares and Roca Rey, this time with cattle from Cuvillo. The next day, El Juli and Aguado will return with those of Garcigrande in a mixed session with Hermoso padre.

The youngsters Juan Leal, Román and Luis David will give account of a lot of Torrealta, a historical iron in low hours, that could have its opportunity in Donostia. And the closing will have another sign similar to that of Bilbao: Zalduendo bulls for Diego Urdiales, Paco Ureña and Ginés Marín.