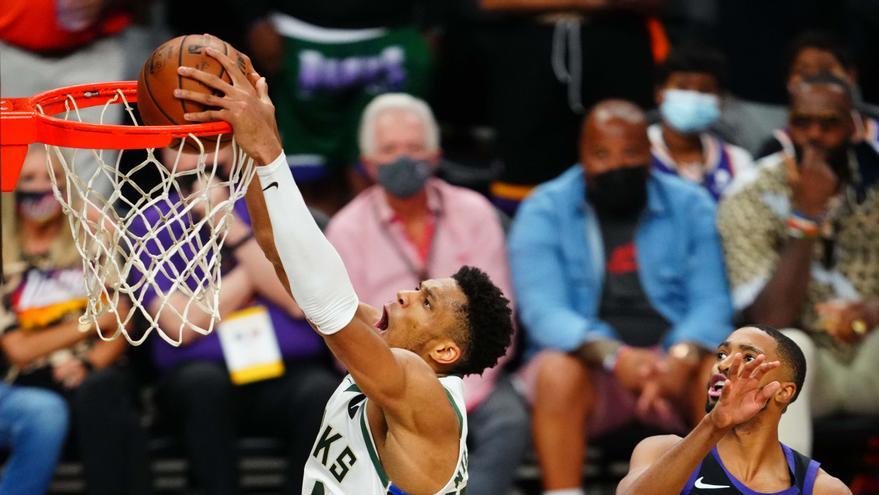 The Milwaukee bucks conquered Phoenix this Saturday with a splendid performance away from the de Giannis Antetokounmpo (119-123) Y They will be NBA champions if they win on Tuesday on their court to the Suns2-3).

The Bucks, who only have the 1971 title in their showcases, will have the option of winning their first ring in half a century from their audience after taking the home court factor from the Suns.

The prodigious triumph of the Milwaukee (USA) was based on the fantastic performance of their stellar trio: Giannis Antetokounmpo (32 points, 9 rebounds, 6 assists), Khris Middleton (29 points and 7 rebounds) and Jrue Holiday (27 points and 13 assists).

All three were involved in the key play of the night.

After dominating the game with a firm hand from the second quarter, the Bucks met the Suns within one point (119-120) and with home possession with only 29 seconds left.

The ball went to Devin Booker, but Holiday snatched it from him and gave a tremendous alley-oop to the counterattack to Antetokounmpo, which also received an additional free.

The Greek failed from the personal, but grabbed his own rebound and Middleton sentenced in free practice.

After four home victories in the first four matches, the Bucks, who lost 2-0 in these Finals, were crowned at home in a duel of great offensive artillery (the two teams over 55% in field shots) and they knew how to control the rebound (37 with 11 offensive, compared to 35 for the Suns).

Devin Booker scored 40 points, but found himself too lonely on the Suns offense for most of the night.

Until the end, the locals missed the best version of Chris paul, about which rumors circulate about his physical problems.

However, the veteran point guard finished with 21 points and 11 assists and was key to trying a comeback that, in the end, proved impossible.

The fifth game featured the excitement of the big events, arbitration controversy, a great atmosphere in Phoenix and a luxury spectator in the front row: Lebron James.

As if they wanted to purge the sins of that fourth game that escaped them in the last minutes, the Suns unleashed an avalanche from the start.

First it was Jae Crowder, who with two triples and a dunk on the counterattack that lifted the entire audience of the newly christened Footprint Center in Phoenix (14-9 with 7.33 left).

Then Devin Booker took over, brilliant in shooting (11 points in the first quarter) and who even made a superb dunk on Giannis Antetokounmpo that finally did not count due to a previous foul.

Antetokounmpo was the only recourse for a few Bucks temperate and harmless who, moreover, drowned in an ocean of losses (7 lost balls, more than in the entire fourth game).

In any case, there was little that the Milwaukee could do against the steamroller of the Suns, who enjoyed the baton of Chris Paul, the hammer of Deandre ayton in the area and stratospheric percentages of success (74% in shots, 83% in triples).

Against an undeniable 37-21 in the first quarter, the Bucks had plenty to row.

They reacted with astonishing solidity, since an early 3-12 run, led by Jrue Holiday, re-engaged them in the game (40-32 with 9.31 missing).

With Antetokounmpo lounging on the bench, squires like Khris Middleton, Pat Connaughton and Bobby Portis claimed their share of the limelight until they came back from the game (49-50 with 5.41 on the clock) after an impressive 12-29 run that left Phoenix fans speechless.

Suddenly, the Suns seemed like a team without direction or purpose, but Booker’s return to the court allowed them to regain some nerve (55-52 with 3.26 left).

However, the meeting by then was very different from the first quarter, with Bucks fully reinforced in defense and with a differential Holiday this time (18 points and 7 assists at halftime) that catapulted the visitors after a sensational second set ( 24-43) and a very attractive first half full of incentives (61-64).

Booker understood that it was now or never and scored an extraordinary start to the third quarter with 12 points in just 4 minutes.

But the young escort was left without help Against versatile, unflappable Bucks led by the Holiday-Middleton-Antetokounmpo trio (75-85 with 5.42 left).

Life smiled at the visitors, who found a thousand ways to penetrate the ineffective defense of increasingly frustrated Suns and who had no news from Paul.

Cameron Payne and Deandre Ayton provided minimal cover for Booker, but the Bucks were shooting with 100 points on the road in just three quarters (90-100).

A clear failure of Ayton in an alley-oop just beginning the final room symbolized the despair of the Phoenix.

Without losing faith, another triple of Booker, with 1.24 on the clock, put them just three points behind, and a penetration by Paul, with 56 seconds to go, put them just one point away. (119-120).

But Holiday stole the decisive ball from Booker and between Antetokounmpo and Middleton they took the victory for Milwaukee.