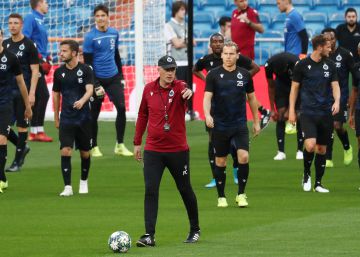 Around three million visitors visit Bruges every year, wearing down the cobblestone that carpets one of the most spectacular cities in Belgium. Full of romantic legends and buildings that maintain an unperturbed story aroma, his football team completes with domestic titles (sum 15, only surpassed by Anderlecht, with 22) this kind of perennial fantasy.

The golden years of Brujas FC date back to the 1970s, when it was presented twice on the last step of the two biggest European competitions of the moment. Coincidentally, in both of them he was defeated against the same team, a Liverpool that deprived him of the title of UEFA Cup champion in 1976, and two years after that of the European Cup. At the head of that team was one of the most renowned technicians of the time, Ernst Happel, Austrian idol, and the only one capable of placing a Belgian team just one step away from continental glory. No one else has achieved something similar in more than 30 years.

That is not the goal of the team led by Phillipe Clement today, and that has Simon Mignolet, his goalkeeper, to the main claim of a block that aspires to reach third place in the group and the ticket to the Europa League. “They are better than us, but we are on the right track. If we reach the level of the last weeks, then we can achieve something, ”said the 31-year-old Belgian goalkeeper, who came to Bruges in August from Liverpool for seven million euros, after proclaiming himself European champion with the reds.

"We have a lot of speed in our attack and therefore we are well equipped for fast plays," Mignolet said. Those main offensive tricks are the Nigerian striker David Okereke, the most expensive signing of the club (8 million to Spezia Calcio of the second Italian division) and which adds six goals in 15 games; and the middle Hans Vanaken, with seven goals and one duel less.

“We are a team that always wants the ball, we want to dominate. Therefore, the intention should be to create as many opportunities as possible, but without losing sight of the collective defense, ”said Clement. "I want to see a team that stays at its maximum from the first second to the last," said the Belgian coach.

After a zero draw against Galatasaray on the first day, the Belgians added their third goalless match in the Champions League, and their fifth consecutive game without losing in a group stage (one win, four draws), which warns of the involvement of a team that is ordered from a 4-1-4-1, and that served to hit the Mechelen at home (0-5) in the last meeting of the Belgian league. "I have a lot of confidence in this group, but it is true that Mignolet is the only one who has played at this level," Clement said.

Directed by Flemish entrepreneur Bart Verhaeghe since 2011, the club, from the feasibility studies carried out by its president, became a public company one year later after the contribution of 15 million euros from a Verhaeghe that automatically became, at the highest shareholder. In the eight years of management that leads the Bruges, it has doubled the revenue from turnover, from 43 million registered in 2011, to the 94 it has billed in 2019 (the 27th budget of the 32 clubs of this edition of the Champions) Its only project stopped, so far, is the construction of a new stadium with a capacity for 40,000 spectators, which is paralyzed by the Belgian government.