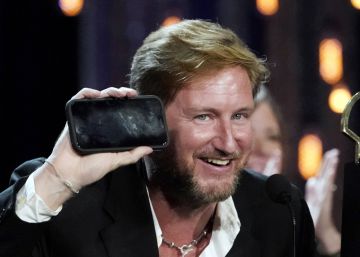 The Brazilian movie Pacified, of the American Paxton Winters, It has been the great winner of the 67th San Sebastian festival. Thanks to his immersion in the violence of the favelas of Rio de Janeiro in the days after the Olympic Games, the drama has won the Golden Shell, the best actor award, for Bukassa Kabengele, and for the best photography. Kabengele embodies a man just out of jail who tries to regain the relationship with his teenage daughter in the middle of an urban battlefield. The inhabitants of the favela expect Jaca to lead the fight again, but he is already a pacified man, who wants to get away from criminal violence.

Pacified It is produced by, among others, Darren Aronofsky, and directed by Paxton Winters, a journalist who lived seven years in Morro dos Prazeres, one of the nearly one thousand favelas in Rio de Janeiro, where he has filmed his thriller, which has splashed some documentary images of shootings. These sequences, shot by the Winters team, show the clashes between the members of the BOPE (Special Police Operations Battalion) and the armed people of the favelas, and give even more likelihood to a film loaded, on the other hand, really and firmness. Winters wanted to portray "the sacrifice of escaping violence and at the same time maintain the honor and integrity" of his protagonist in that context, he told in his presentation to the press. "My role has mostly been to listen, observe, ask questions. I am just the channel. The film belongs to them," Winters said, which connected from his mobile phone with the inhabitants-actors of the Morro dos favela Prazeres.

As for Kabengele, the Congolese actor and singer, who has been in the performance since 2003, recalled days earlier: "54% of the Brazilian population is black, and mortality reaches scary figures. They are people who only appear in the media when talking about criminality. The great thing about Pacified is that it has the courage to focus on human relations and not on shots and explosions. "He was not at the ceremony and in his name a message was read that recalled this inequality. It is the first time that Brazil has won the Concha de Gold, and also the first time a director of photography wins in her section.

The other film catapulted by the jury's record, chaired by Neil Jordan, has been The infinite trench, directed by Aitor Arregi, Jose Mari Goenaga and Jon Garaño, responsible for Loreak and of Handia. They take to the offices of their production company Moriarti - in Pasajes, just over four kilometers from the Kursaal, where the awards ceremony was held - the Concha for best direction, the trophy for the best script (by Goenaga and Luiso Berdejo ), the FIPRESCI prize for international critics and the Feroz of Spanish film reporters. Goenaga said: "We thought we could provide a narration of the experience of a 33-year-old confinement centered on the one inside, who feels that the world changes outside, a few meters away from him, while that Higinio is stranded. psychological journey. " Why The infinite trench accompanies the life of a mole for more than three decades, a man played by Antonio de la Torre, and his wife, to which Belén Cuesta gives life. For their directors, who dedicated their prize to the best performance to their team and those who feel fear, "in The infinite trench that mied grips Higinio, a universal and eternal fear of uncertainty, what is outside and what can happen. That could be extrapolated to Spain today. "

The other two Spanish films have had very different luck. While the war lasts, Alejandro Amenábar, will finish first at the box office over the weekend, as he took advantage of the contest as a platform for its commercial launch. In return, he has not found reflection in the medal winners. Yes you have entered The daughter of a thief, of the debutante Belén Funes, thanks to the immense work of Greta Fernández, who stars in a plot at the beginning similar to that of Pacified: a father leaves prison and a daughter hopes to rebuild emotional bridges. It was Greta herself who suggested the name of her father, Eduard Fernández, to embody her father in a Barcelona at the edge of poverty, far removed from political reflections and you process. If Greta's career has started firmly in the last three years, Eduard's position places him among the best Spanish actors in history. It is the first time a father (in 2016, Eduard took her with The man of the thousand faces) and a daughter have won the Shell for the best interpretation. A nervous Fernandez shared her prize with a great European filmmaker, Nina Hoss, who in The audition It embodies a violin teacher obsessed with one of her students.

By recognition, the second best film of the festival has been Next, Alice Winocour, another film with the camera attached to its protagonist, in this case a French astronaut (great Eva Green) about to embark on a one-year space mission and facing the farewell of her seven-year-old daughter. The emotional pressure of this separation and the final preparation of the trip are going to stagger a stronger woman than those around her believe. Nothing to object to an interesting film that only has a blur - yes, it is striking - in the final third of his footage. Of course, its auction is irreproachable, and ends up. By the way, only eleven mothers have come into space in the history of mankind.

It has been an official section quite discouraged, with not very positive comments issued from the jury. Nor has glamor saved the event, which has instead left a powerful photo for history: that of Penelope Cruz receiving her Donostia award from the musician Bono. The selection committee will have to rethink which fishing grounds their films are looking for. As good as other sections in the Zinemaldia, a festival is measured by its Official section. As for the gala, it was quick and effective with a couple of references from the Argentine winners to the fight for an abortion law in their country. The RTVE Award - The other look was precisely for a documentary about it: The green wave by Juan Solanas.

In the New Directors section, the movie he won was for the Chilean Some beasts, Chilean Jorge Riquelme Serrano, who has two greats in his cast as Alfredo Castro and Paulina García, about an abandoned family on a small island, a situation that awakens the worst of its members. In Horizontes Latinos, there were two or three great films, and one of them was the winner: Argentina Again, from Romina Paula. In the Zabaltegi - Tabakalera section there were no surprises: Ich War Zuhause, open, Angela Schanelec, winner of the Silver Bear in the last Berlinale, won the main price.

Finally, the public prize - with an impressive note, 9.19 out of 10 - for the kings of the box office, the French Olivier Nakache and Éric Toledano, filmmakers Untouchable Y C'est la vie, that a special comedy is marked that could be summarized as Champions With autistic guys.

Silver Shell to the best address: A. Arregi, J. Garaño and J. M. Goenaga, for The infinite trench.

Silver Shell for best actress: ex aequo Greta Fernández, for The daughter of a thief and Nina Hoss, for The Audition