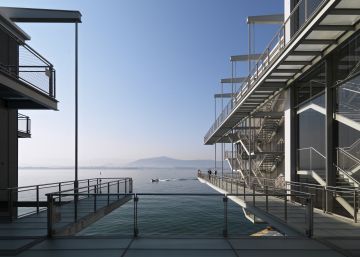 The Botín Foundation last year invested 20.6 million euros, which is one million more than the previous year, as highlighted today in Santander its general director, Iñigo Saenz de Miera, during the presentation of the Report for 2018. Of that figure, 13.7 million corresponded to the Botín Center, representing an increase of 30% over the 10.5 million that were allocated to the center the previous year to finance activities and exhibitions. The rest was allocated to the institutional strengthening (three million), science (1,8), education (954,000 euros) and rural development (450,000), basically.

During this exercise, the first full activity, the Foundation has artistically and socially consolidated the Botín Center of Santander, which, according to Saenz de Miera, "is alive and will keep the tension in its activity in the coming years with the objective of deepen the expansion process in all its programs. "

Sáenz de Miera stressed that the Botín Center, which opened its doors in June 2017, and its surroundings have become a "meeting place" for the Cantabrian capital. Likewise, it has valued that this consolidation as an artistic space with exhibitions at the "level of the best in the world" has been reconciled with its social work, with more than 272 activities last year, with an average of five a week, in which 34,225 people participated.

Among the highlights of the year has been the assignment by Jaime Botín, patron of the Botín Foundation, of eight masterpieces of the 20th century from his personal collection, which are already exhibited in the room "Portraits: Essence and Expression". "This assignment, which is completed with the donation of one million euros a year for the conservation of the works and contribute to the social mission of the Center, is immensely generous and can not stop being remembered," he remarked.

The exhibition offer of the Botín Foundation art center in Santander was completed, during 2018, with the facilities of Cristina Iglesias, one of the most internationally recognized Spanish creators; the exploration of unpublished aspects of consecrated figures of Spanish art, such as Joan Miró, and a new selection of works from the Fundación Botín collection, grouped under the title "El paisaje reconfigurado", with works by artists of national and international relevance began to create in the last decades of the twentieth century.

According to Sánez de Miera, the social work of the Botín Center has taken place ahead of schedule. As he explained, the forecast was that the first years were "crazy", in which the goal was to "survive". In that sense, he has detailed that, in its first year and a half of life, the cultural infrastructure, designed to "give a kick of creativity" to society has reached 142 collaborations with the Cantabrian cultural fabric and has issued more than 137,000 permanent passes to citizens of the region.

The goal for the coming years is to go through, without obsessing on figures that are already "very good", for the "expansion and deepening" in all the programs of the Center, with an "effort to gain effectiveness". "It is not the time to think about a new line", pointed Sáenz de Miera, who has not ruled out that "turns" can be produced, although he has clarified that they will be "naturally", with processes of changes that may be taking place. already "without one noticing or being aware of the scope they can have".

Sáenz de Miera also highlighted the trinomial efficiency-innovation-collaboration , which in his opinion is the common denominator of all the actions undertaken in 2018 by the Botín Foundation. Thus, the expansion of Program of Rural Development, Heritage and Territory it is a good example of this public-private collaboration, which also fulfills the initial vocation of the program to define a model and transfer it to other territories.

In this sense, in November 2018, the Government of Cantabria, the City Council of Valderredible and the Botín Foundation began to work together on the implementation of a plan to revitalize the municipality, in the south of Cantabria, with the idea of ​​stopping the despobación and contribute to the implantation of an economic and sustainable model.

According to the director of the Botín Foundation, "in 2018 the fourth call for Mind the Gap, open for the first time to the entire national system of science and innovation. This initiative to support biotechnological entrepreneurship now has six companies that jointly invoiced around 1.3 million euros, raised 1.2 million capital and maintained 44 highly qualified jobs. "