The November sun still bathes the exhibitors with books from Madrid Cuesta de Moyano. A few onlookers and customers come to see the tomes piled up in front of the wooden huts, while inside the stalls it grows in the afternoon shade and the lights are turned on. A part of the 30 positions of this fixed “book fair” they are closed. Most, for rest. Some, permanently.

The establishments on Calle de Claudio Moyano, “the most read in Madrid“as described Francisco Umbral, somehow incarnate, from their apparent precariousness, now almost a hundred years old, the resistance and difficulties of the guild in the age of screens.

Nevertheless, This November 11 the sector celebrates the Day of the Bookstores throughout Spain with encouraging signs. Despite the pandemic, the latest blow to a business that has accumulated years of crisis, sales seem to rebound. The paper is not dead yet, as some prophesied, although the data is far from the best of times.

In 2020, with the coronavirus, it was edited less than in 2019, but sales managed to sustain the slow comeback started in 2015. The number of books dispatched, however, it did not even reach two thirds of the volumes sold 2007, when the world of the book lived a buoyant time. The financial crisis, together with the emergence of ‘ebooks’ and other competitors in the entertainment field, then caused a dramatic collapse in sales.

Last year, turnover also timidly increased. And the numbers that the sector advances over this year seem to confirm the progress. In the first half of 2021, excluding textbooks from statistics, the union entered 44% more than in 2020, as highlighted at the Forum Edita editorial meeting, held last September in Barcelona. Compared to the first half of 2019, the rebound was 17%. 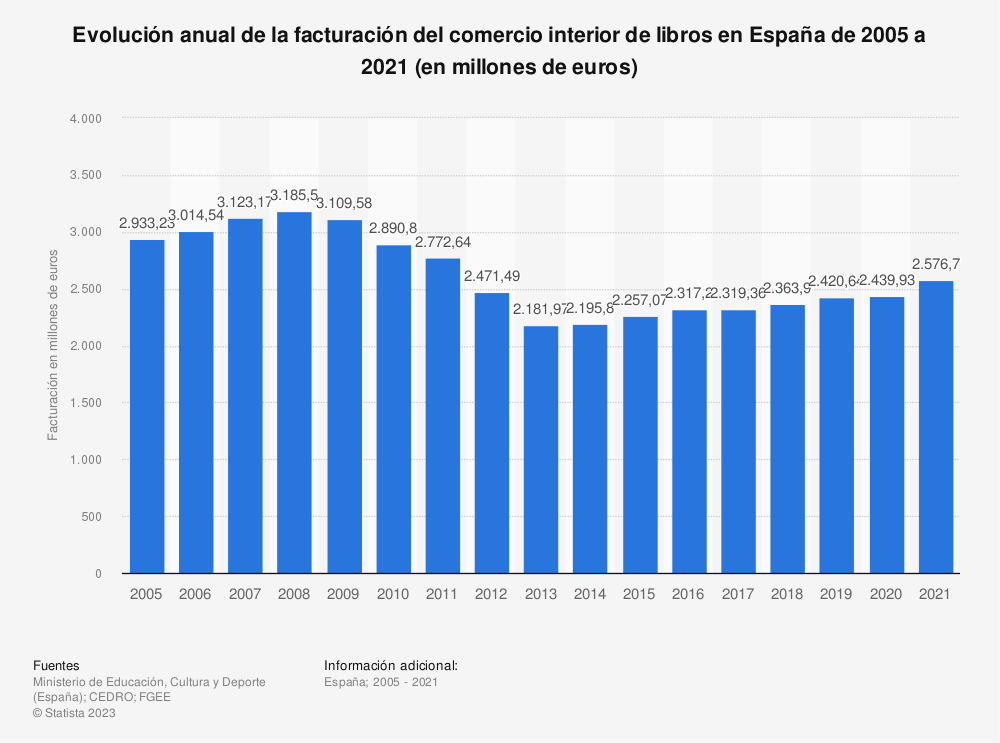 But those Industry numbers as a whole, which may reflect a good evolution in large chains or platforms, they do not always represent the reality of small and medium-sized bookstores, which face more obstacles to survive. In booth 30 of the Cuesta de Moyano, the last of the ramp that goes up parallel to the gate of the Botanical Garden, between Paseo del Prado and El Retiro, Carolina Méndez translates into bittersweet words the sensations left by the figures. “The world of paper and the book is wrong“, he regrets. The outlook makes him doubt even the future of his business.”There are times when I think that one of my children could continue here and others when I think it doesn’t make any sense., that in two years I close or that in a year I close, “he acknowledges.

Although most of the establishments on the street sell old and second-hand books, or specialized in various topics, Carolina, which is the President of the Cuesta de Moyano Booksellers Association, runs one of the few positions that also offer news. “Not everything here is an old and used book“He emphasizes. All kinds of clients go to his bookstore and, from his knowledge, he can afford to advise readings:” Younger kids, for example, throw more at ‘manga’ and ‘youtubers, but I, if I have confidence with I try to lead them to other things ”.

Clients in one of the exhibitors of the bookstores on the Moyano slope, in Madrid. Jose Luis Roca

Like many independent bookstores, a large part of those that make up this fair of municipal concessions also sell through the internet, although most do so through platforms, and only four of them have their own online store. It is not the case of Carmen rivas, booth 25 bookstore, specialized in music. She tried on the web sale but ended up being deleted. “I prefer contact with the person, That for me has a value that the internet does not give you, “he highlights. Among novelties, rarities, monographs or scores, Rivas dissects the problems of the sector and is clear about the threats.” Before the pandemic, we were already beginning to notice how sales were falling due to the issue of so many multinationals and the brutal discounts they make, due to the large volume of orders they order, that we, the booksellers, cannot do“, he points out.

“I believe that the role will never be lost”

But Carmen continues to trust the future of the physical book. “I believe that the role will never be lost“, he defends.” We were very afraid of the electronic book, but I see people on the bus or the subway with paper books. The smell of ink, of printing …“, he evokes, as he opens a volume of his establishment and turns the pages. And he gets excited remembering an image:” Not long ago a girl passed by here who would not have much time. His father had bought him a story and it gave me goosebumps because he said: ‘Look, dad, look how it smells’. I thought ‘how wonderful, he will be 7 years old and he is already appreciating that’, and I said to myself: ‘That girl will never read an e-book’“.

From his bookstore, he does perceive that sales have rebounded after the pandemic, although he maintains his reservations: “Sales are increasing somewhat, but not enough. People do not move from home, it is very keyboard and internet. “” It is being very hard, you have to sell a lot of books, “he sums up.

One of the stalls with a new book on the Cuesta de Moyano. Jose Luis Roca

A guild with a female face

Carolina and Carmen put the feminine face to a union with a large presence of women. According to him Map of Libraries 2021 of the Spanish Confederation of Booksellers Guilds and Associations (CEGAL), its representation in the business reaches the 59.7%.

This study, prepared by the University of Zaragoza, highlights the “stability and resistance of the small and medium-sized bookstore” -3,208 establishments throughout Spain- but also the fragility of a large part of the shops. In fact, almost half of those registered have a turnover of less than 90,000 euros, which leaves them, according to the association, on the edge of survival.

The report, which focuses on businesses whose primary activity is the retail sale of new books that are not owned by large chains, also reflects the growing implementation of online commerce. If in 2019 only 25.8% of bookstores used this method, last year that figure rose to 38.9%. Internet sales account for 11.9% of their turnover for these businesses.

In front of siege of new forms of leisure, so linked to screens and streaming channels in the last decade, the greats of the book sector have also defended themselves from technology, with the ‘ereaders’, for example. And in that war, the independent, small and medium-sized bookstores, more attached to the physical store and the traditional business, have suffered more despite the achievement of increasing their volume of business on the Internet.

Regarding the global billing numbers in 2020, book sales accounted for 74.7%, while the stationery items contributed 16.7% and magazines 2.5%. The proportions vary, however, depending on the type of business. In local establishments, for example, the stationery business has a greater weight, 31.8%

With the establishment of the November 11 as a fixed date to celebrate Libraries Day, promoted by the Spanish Confederation of Booksellers Guilds and Associations (Cegal), the sector wants to vindicate the cultural value of these shops, which will offer a 10% discount throughout the day.

In the Cuesta de Moyano, in addition, and thanks to the work of the association ‘Soy de la Cuesta’, writers such as Fernando Aramburu, honorary member, or Rosa Belmonte, among others, they will sign copies and act as booksellers for a day in the booths. In recent years, authors such as Arturo Pérez-Reverte or Rosa Montero They have also participated in campaigns that vindicate the value of this permanent book fair.

The stalls are more lively on holidays. Between customers and onlookers, behind two pairs of glasses, superimposed, Javier Gurruchaga’s bulging eyes look for “old, police books, some strange title”. Since the booksellers settled here, this street has always been one of the city’s favorites for intellectuals.

The historic leader of the Orquesta Mondragón, who still has a third pair of sunglasses, these sunglasses, declares himself physical book supporter. “Now the language is more virtual, with computers, but it creates vision problems for me. The paper book does not hurt me and on top of that I find out great stories. It is extremely attractive to search for titles in person and not by phone or computer, which is all very cold. That search seems terrible to me“, censorship.

Lately the singer has been reading the great Russian writers – “Dostoevsky, Chekhov, Tolstoy, Gogol …”. And on the Cuesta de Moyano, while chatting with the booksellers, he is still looking for “a beautiful translation, some oddity.” “It is a great walk, one of the few corners of Madrid where you can breathe“, celebrates.