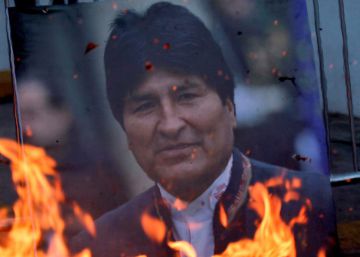 Until just a few weeks ago, Evo Morales seemed to have Bolivia under his control. The indigenous president, after 14 years in the Government, intended to perpetuate another mandate in power, but as the renowned Bolivian sociologist René Zavaleta says in "South American France, the policy takes place between revolutions and counter-revolutions." Morales has been overthrown. From his exile in Mexico he witnesses how the non-indigenous middle class responsible for their departure Take power now. His discredit in some popular and indigenous sectors, the strata of the population he promised to protect, has grown over the years. Many of them joined the revolt or did not defend their historical leader. The Army was the last actor to join the seditious movement, for political opportunism. The perfect cocktail for an ending (for the moment) that an extensive literary production had advanced.

The most famous political writer of Morales's "process of change" (2006-2019) was the vice president Álvaro García Linera, author of many essays, which, in the wake of the Italian philosopher Toni Negri, exalted "the constituent power" of Bolivian workers and indigenous people. García Linera proposed "the overcoming of representative democracy", an approach that was not picked up by the Constituent Assembly (2006-2008), which, instead, approved a Constitution in which nationalism, Indianism and liberalism are mixed, as documents Salvador Schavelzon in The birth of the Plurinational State of Bolivia.

This State replaced the republican model prevailing in the 1990s, which implied the official entry of indigenous symbols - such as the flag wiphala- and of the indigenous animist faith. These incorporations caused the rage of the “non-indigenous” opponents to Morales, who, more than a decade later, and led by the fervent Catholic Luis Fernando Camacho, would “return the Bible to the Palace”.

Debates around the Plurinational State

For some intellectuals, the Plurinational State was a first step to “decolonize” Bolivia, that is, to overcome the historical racism of the white ruling classes. This was explained by the philosopher Juan José Bautista in Criticism of Bolivian Reason.

This effort implied a “positive affirmation” of the natives that was described as racist by the liberal Indianist Carlos Macusaya (Identity battles), and as a means of subordinating indigenous people to the State by Silvia Rivera, the most important Bolivian sociologist alive. The author considered Morales "a developer imbued with a purpose similar to that of white elites: to homogenize, through the expansion of capitalism, the reality" ch’ixi "(diverse) of the country (A ch’ixi world is possible) ". The diversity threatened by Morales consisted of the combination of different" civilizations ", productive and organizational logics, and cultural forms.

In 2001, 62% of Bolivians identified themselves as indigenous; In 2012, this figure dropped to 41%. What was happening during "the process of change" with the Bolivian identity? Many books addressed this issue. Verushka Alvizuri, in The construction of the aimarityHe stated that Aymara, like all nations, was not natural or essential, but the result of a premeditated process of political creation. From a postmodern position, Javier Sanjinés criticized the classic project of mixing and unifying Bolivians in The mirage of miscegenation; and the politician and historian Carlos Mesa defended him in The mermaid and the charango.

Nor were racist approaches missing: Óscar Olmedo, in Paranoia Aymara, a decade was anticipated to the opinion that emerged with great force last weeks. Thinking about the indigenous marches in support of Morales, Olmedo wrote: “The caterva not only dragged her feet pitifully through the streets, she also does it with the choruses… turned into muddy, lumpy phrases… There is no more. It doesn't work anymore. ”

This racism reactive to the advances of the natives was studied by Rafael Loayza in The faces and tares of racism. Loayza discovered that the “non-indigenous Castilian speakers”, feeling oppressed by the Plurinational State, had developed a kind of ethnic consciousness; a finding that explains, in good part, the strength of the mentioned rise of the urban middle classes against Morales.

The figure of the patriarch

During his Government, the biographies of the indigenous leader were legion: ... one Evo, Evo ... coca rebellion, Evo, silver foam. Some were, directly, hagiographic. The writer Eusebio Gironda informed the press that in his book Illapa del Wiracocha, the lightning "Evo is the envoy of the god Wiracocha to execute what he is doing."

Morales himself dictated to another of his relatives, Iván Canelas, My life. From Orinoca to the Burned Palace. This book did not have the success of Boss, by the Argentine writer Martín Sivak. In this work on the chaotic and caudillist habits of the president, there is what today is a suggestive relationship, on the part of the biographer, of one of his dreams: “They come for me and I have to defend myself. They think I don't know who Katari was. ”