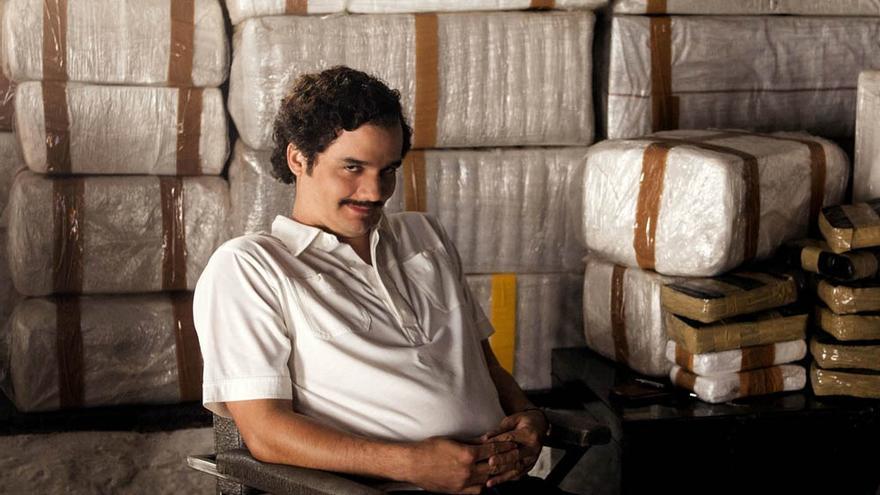 The Serie Narcos He was inspired by the lives of two former agents of the DEA (US Drug Enforcement Administration): Javier F. Peña and Steve Murphy. It has been 27 years since Peña and Murphy, together with the National Police of Colombia (PNC), ended the empire of what may have been the greatest drug trafficker of all time – or at least the most media – and one of the most bloodthirsty: Pablo Emilio Escobar Gaviria (Rionegro, 1949 – Medellín, 1993), “the first narco-terrorist,” according to Murphy.

Javier F. Peña (Texas, 1948) and Steve Murphy (Tennessee, 1957) have just published their book Hunt the man: how we caught Pablo Escobar (Peninsula) where they narrate the greatest milestone of their professional career: striking down the Medellín cartel. Murphy and Peña risked their lives for years – Escobar paid $ 300,000 for each of their heads – tracking down narcos, hitmen and murderers amid corruption, terrorism and drugs. Years in which Pablo Escobar appeared in the ranking of the richest men on the Forbes list, he handled 80% of the world’s cocaine and, along with his cartel, murdered “some 3,000 victims,” ​​according to his son, Juan Pablo Escobar Henao.

Juan Pablo also claimed that his father was not killed by the PNC, but rather “committed suicide.” Steve Murphy says this “is a lie.” Murphy was there and saw the condition of the corpse. Proof of this are the controversial photographs in which Murphy and Colombian police officers can be seen posing next to the inert body of Pablo Escobar. “My only regret is that I have disrespected a human body (…) To be honest, I was very happy that Pablo was dead because we knew that when he stopped living the citizens of Colombia would be safer, as well as the citizens of the world, just because a man had died, “Steve Murphy recalls.

“I don’t believe in coincidences. I think that God has a plan for all of us. For some reason, His plan was to have the two of us together. [Peña y Murphy] going against Pablo Escobar. There’s nothing special about us, we’re not tough guys, but we were able to do what we had to do and survive, “believes Steve Murphy.

Peña and Murphy comment that Narcos chronologically it is well scripted. However, according to Peña: “30% is true and the rest is artistic license.” Murphy emphasizes that “his wife never left Colombia”, as the series narrates. When Connie Murphy read the script for Narcos He said to Steve, “Have you read this shit? This isn’t true?” Steve says that his partner, despite barely speaking Spanish, would go out into the streets of Bogotá with her dictionary in hand and as “the people of Colombia are very friendly,” Steve thinks, he got what he wanted.

If something especially conveys the book Hunt the man It is the “exciting” professional work of these two ex-agents, who came to violate the security protocol of the DEA; as they were exposed to more risk than allowed. They never hid from their bosses “the fact that we were going out, but nobody would tell us anything because we were getting results,” says Murphy. Nor do they hide that they were afraid of car bombs and when they flew by helicopter, as they were easy targets for snipers from the Medellín cartel.

“Any DEA agent would have wanted to be in our shoes in that mission. Because that’s what we do, if you are a DEA agent you go against the biggest drug traffickers in the world who have a negative impact on the US (.. .) He was the first narco-terrorist, he became the most wanted criminal in the world. It is something that I would not like to do again, but that I would not change for anything in the world “, Steve Murphy shares from his themed room Narcos in Washington DC

“We want people to visit Colombia. If you go to Medellín, take care of yourself, it’s very pretty, but don’t speak ill of Pablo Escobar because there are still people who love him. We know about the narcotours. When we signed with Netflix we agreed on one condition: that they were not going to glorify Pablo Escobar, “says Peña.

In the last decade, few series have hooked both international audiences and Narcos. “It became the second most watched Netflix series in the world only behind House of Cards“shares Peña. Proof of his impact was the boom of the drug tourism that Medellín experienced in 2016, where from a former policeman to a former hit man they carried out tours showing the sites where Pablo Escobar lived and killed. As well as the Cathedral, the prison where Escobar was imprisoned, along with part of his cartel, in exchange for not being extradited to the United States of America. While Pablo ran his business from his luxury jail, the DEA could hardly do anything. “Obtaining any information about Escobar during that time was extremely difficult, especially since one of the stipulations of his delivery prohibited us from approaching the Cathedral,” Murphy reveals.

“In Colombia they think that Pablo Escobar is a Robin Hood, but Robin Hood did not kill the one who was going to be president of Colombia [Luis Carlos Galán Sarmiento], he did not put a bomb on a commercial plane or in the DAS building, he did not kill the journalist Guillermo Cano because he wrote that maybe Colombia should extradite drug traffickers to the United States “, lists Javier Peña, who considers himself a Catholic like Pablo Escobar. Peña says that “La Terraza”, a humble Catholic church in Medellín, was “bought by Escobar’s money” and that there, through “Pablo’s charisma”, he recruited his hitmen, who were between 13 and 22 years. Peña recalls interviewing a 15-year-old hit man who claimed that he had already killed ten policemen. “He told me ‘my life is nothing. I kill for Pablo Escobar. He took my mother out, gave us money, now we have a little house, we have food. My life belongs to Pablo Escobar. ‘”It multiplies that attitude by the 500 hitmen that Pablo had,” says Peña

As revealed in the 2019 report of the International Narcotics Control Board, the illicit cultivation of coca leaf has doubled its extension from 120,600 to 245,000 hectares from 2013 to 2017. Also, in 2017 a historical maximum of 1976 tons of cocaine was registered mostly made in Colombia and destined for the United States.

How to collect Hunt the man ending Escobar’s life meant shifting the throne of cocaine from Medellín to Cali. Javier Peña confesses that the search for Pablo became something “personal, he was no longer the trafficker” as it turned into “revenge because he killed many friends of mine from the police and innocent people.” “If it were up to me, I would have brought him to the United States. Many people don’t know, but Escobar’s fight was against Colombia for extradition. When he put up car bombs, he put up posters that said ‘This bomb was put by the extraditables’ or’ I prefer a grave in Colombia than a jail in the US. ‘I wish he had been extradited, but we all knew that he was not going to be extradited, “adds Peña.

Javier Peña and Steve Muprhy insist that drug education is also a basic pillar in the fight against drug trafficking. “We have to go a long way in educating about the effects of drugs, the consequences and how you support terrorism when you buy illegal drugs,” says Murphy.

The best moments of the G-Men, the group that led to the madness in the 80s