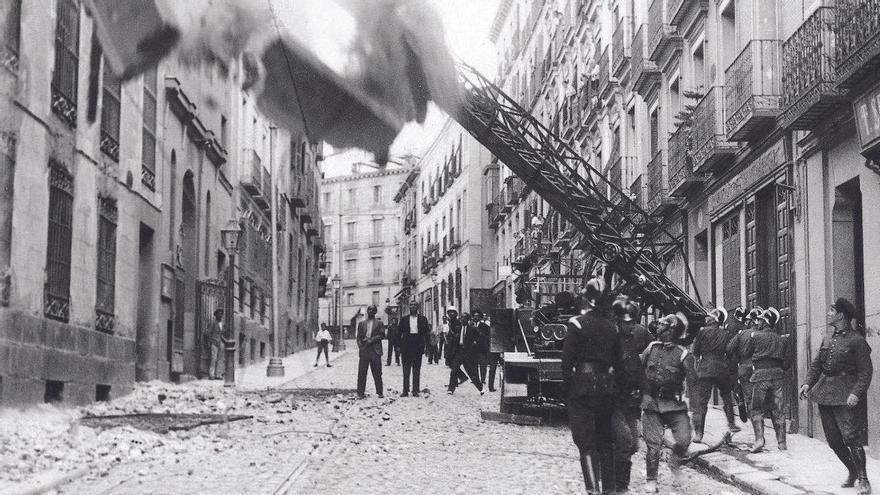 Juan M. Redondo (Úbeda, 1954) has been a Madrid firefighter officer for thirty-five years and head of the operation for thirteen years (from 1989 to 2004). For a time the Museum of Firefighters was under his direction, currently awaiting opening for remodeling, but he has been and will be in the fire station number 8 located in the Puente de Vallecas. Your book When the mermaids weren’t ours (Libros.com, 2020) narrates the performance of the body during the Civil War in Madrid. “To write this book I have relied on the historical archive of the firefighters, which is in the Museum. There are the documents and books that give an account of all the events, news and accidents that the body has had to attack “, explains its author.

Redondo recalls that when he first opened those black hardcover books he discovered that what happened every day was narrated in handwriting: “Curiously, when I see 1936-1939, which is a large book in A3 format, I open it and I am perplexed when reading what is detailing: bombardment, howitzer, the address, the time and the signs of which park operates. “Juan also studied the personnel books in which details such as” such a fireman died in the Sierra from a gunshot wound “or” such a firefighter died due to the collapse of a building were recorded. after bomb. “In the personnel book you can see the number of firefighters who joined the People’s Army to fight against fascism.

Madrid firefighters were created in 1905 with four parks and a quasi-military discipline. In 1936 the body had 400 men for a city of just over a million inhabitants; Furthermore, the service covered more municipalities outside the capital, given that there were towns that did not have firefighters: “We had a service very similar to those of the Central European capitals. French and German vehicles, the pumps were Benz and the first-exit cars were The Allen’s uniform was navy blue with a belt suitable for all tasks and a nineteenth-century military helmet. ” Juan tells in the book that the service was highly politicized and mostly unionized. “The majority union was the UGT and made up the Fire Committee.” Not all the fire brigade sympathized with the Republic. In fact, members of his leadership were executed on charges of fifth columnists early in the war.

He says that on July 19, 36 at 8:45 p.m. it was noted in the “telephone book” that the church of San Andrés was on fire. Each park had one of those books and a firefighter “passed to go to fire” was in charge of it, who points out the day, time, accident and the teams that come to solve it. The churches of Madrid, faced with the news of the coup d’état, begin to burn. During those first days, thirty-five burned religious buildings are recorded in the telephone book: “The firefighters didn’t even know where to go.” In the book the author relates: “One of the foremen, Mr. Campos, indignantly communicates that in the fire of the hermitage of San Isidro they did not let him act, having to withdraw. Another foreman from the same park, Mr. Valero, communicated by internal note that a firefighter ‘belongs to the military!’, as one who reports an unprecedented event. “

As the front draws closer to the city, its firefighters continue their ordinary working life: “Gasoline burns, soot from the chimney, lattice fires, and the car that was burning on the public highway was not missing. The same thing was going to shrink. water to the house of the philosopher Ortega y Gasset in the Hotel 5 de la Prensa, which was going to the Barajas aerodrome, which is used with many means to deal with the fire of apparatus and hangars, an objective of national aviation. On October 30 at 4:30 p.m. the first enemy planes roar in the sky over Madrid. Juan points out that: “They released their load of fire, death and destruction first in Villalba, from where they requested the service of firefighters to attend to fires, rescues and collapses of buildings.

Juan Redondo says that the firefighters were prepared to deal with many and varied unpredictable, risky situations, but “not to face the situations that occur in a war.” The firefighter affirms that Franco begins to bombard the Casa de Campo on October 30, 1936 and “since nobody gave a penny for Madrid, the Government left the city on November 6, leaving General Pozas in command of the Defense Board and especially General Miaja. ” Juan narrates that an anarchist control stops the procession on the way to Valencia and that the mayor of Madrid Pedro Rico was forced to return to the city in a humiliating way. “Before the arrival of Franco at the gates of Madrid, in frequent rallies, this Republican Action politician called for the resistance to die rather than flee. Pedro Rico took refuge in the Mexican embassy and ended up fleeing in the trunk of a banderillero of Juan Belmonte’s gang “.

From the telephone book we can see that the main objectives of the bombing of Madrid were: the line between the Telefónica building and Alcalá 3, where the Miaja barracks was located in the basement of the Ministry of Finance. “The shells that fall around cause damage in Lavapiés, Puerta de Sol and Malasaña. While the other reference is the Argüelles neighborhood and the University City”. The neighborhoods that practically did not bomb in three years were the Salamanca neighborhood and the Chamartín neighborhood.

The firefighter points out that the fire fighting services did not stop, the personnel were working 24 hours a day, and they even relocated with their families to live in the same parks. Fire in Madrid was not a simple matter since the wooden frameworks were the mainstay of the buildings and this made the spread fast. Water is added to the fire: the pumps broke pipes and many basements of buildings were sunk and flooded. “The firefighters had to go drain the basements too.” The Canal de Isabel II had to cut off the city’s water due to the danger of flooding, with the addition for firefighters of where to load the tanks if the openings of the public highway were closed.

“Franco’s army, from Cerro Garabitas in Casa de Campo, bombed Madrid and punished it constantly. When the noise of planes and shells arrived, everyone took refuge in the subway or wherever they could, but the firefighters on the contrary, they left. They were three years of agony and absolute harassment. The firefighters were even requested to, in the middle of the front, rescue men buried by the terrible artillery fire. And Franco targeted the fire stations because “the firemen mitigated the effects of the destruction they wanted for Madrid, they were like the soldiers from the rear.”

In ’38 the Madrid front was entrenched: “Madrid, how well you resist.” After the battles of Jarama and Guadalajara, the fascist army is centered in Teruel and the northern front. Madrid firefighters are tired and the incessant bombing of Madrid has taken its toll, that is why the Catalan Federation of Firefighters sent a delegation of Catalans to pitch in. Juan M. Redondo affirms: “The Catalan firefighters came out of solidarity, to defend the Republic. I am excited that they came because the firefighter’s uniform was on top. Catalan or Madrid, they were all firefighters.”

The end of the three-year siege was extremely harsh: “Just as the Madrid population was experiencing real hardships, the firefighters were no strangers. For months they did not eat fish, milk, fruit, or eggs. Companions lost fifteen to twenty kilos … “. But the worst would be yet to come: “On March 28, 1939, when Franco arrived in Madrid, the fire department was completely purged. I discovered 60 war summaries, and that resulted in two shootings and 40 firefighters in jail “. After three years of horror, the ultimate horror had just begun.