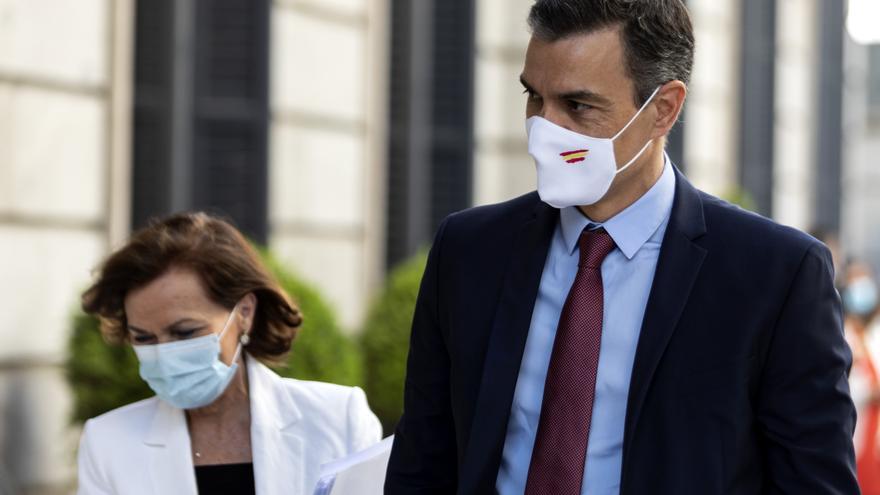 The Board of Congress has rejected the requests of United Podemos, ERC, EH Bildu, Junts, CUP and BNG for the president, Pedro Sánchez, and the first vice president, Carmen Calvo, to give explanations about the government’s involvement in leaving Spain of Juan Carlos I, whose fate –United Arab Emirates– The Royal House only reported 14 days after making public that the emeritus was going abroad amid the scandals of his estate.

The Board has relied on a letter from the Chamber’s legal services in which the lawyers decree the non-admission for processing of the requests for both appearances, understanding that they deal with a “matter beyond the competence of the Government.” The three members of United We Can in that body are the only ones who expressed their disagreement with this decision and voted in favor of Calvo’s appearance, according to coalition sources.

The petitioning groups wanted the president and the prime vice president and minister of the Presidency to explain in the parliamentary headquarters “the information available to the Government, what has been its support for the operation to flee the king emeritus and what this represents regarding the solidity of the State institutions ”.

The decision of Juan Carlos I to leave Spain opened several fronts in Spanish politics and introduced a rift in the coalition government. Unidos Podemos, the executive’s junior partner, has been very critical of Juan Carlos I’s departure from Spain, although President Pedro Sánchez has made an effort to publicly settle the debate on a hypothetical consultation with the public.

Ayuso asks the Government for tougher measures against the pandemic from the community with fewer restrictions: “I want to express my satiety”

Ceuta’s Health Minister resigns who snuck into the vaccination