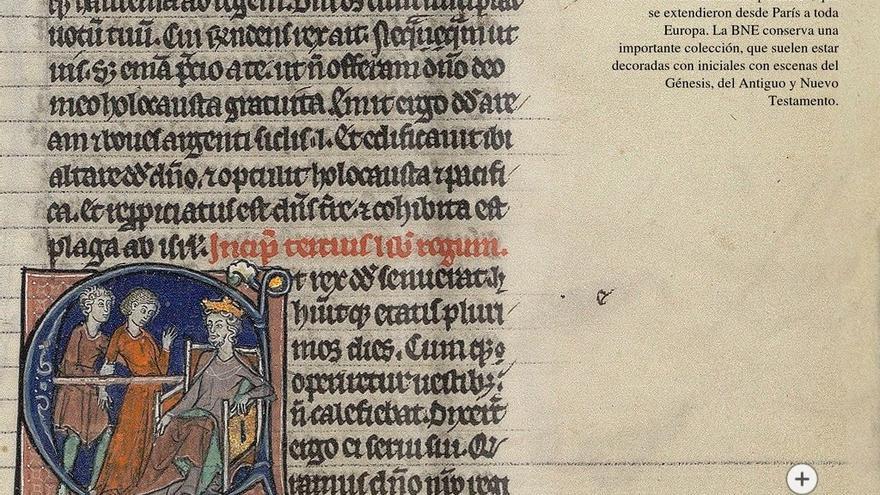 Starting tomorrow and until September 5, the Hipóstila room of the BNE will host this exhibition curated by the French expert Samuel Gras, who started the studies of these manuscripts in 2017 together with the deceased last year Javier Docampo, who was the director of the Department of Manuscripts, Incunabula and Rare of the BNE.

As Gras explained, the sample brings together 70 of the 156 French and Flemish decorated manuscripts - hence the fact that they are classified as illuminated - that the BNE has. A set of works that is the first of the three exhibitions with which this institution will show its collections of these books that place it, together with the Library of the Royal Monastery of El Escorial, as one of the most important in Europe.

Thus, the visitor will also be able to contemplate on dates not yet closed the illuminated manuscripts from Spain (of which there are around 400) and from Italy (around 300).

But this exhibition, carried out in collaboration with the Centro de Estudios Europa Hispánica, "Luces del Norte" has a double interest, Gras detailed.

On the one hand, show the visitor these works of art of "great beauty" in which some of the most outstanding miniaturist workshops of the moment collaborated; and on the other hand to reveal the "thought of the human being" in the 16th century and thus demonstrate that it was not so much, as is considered, the "period of darkness".

For example, the tour is divided by themes in which you can see the thinking of the time in areas such as justice, history, women, religion or fun. Testimonies that reconstruct the daily life and beliefs of European society from the times of Charlemagne to the reign of Francisco I.

Specifically, works such as the codex "The Great Chronicles of France" (1460), or books of hours, "the best sellers of the time", as Gras has described, such as the "Hours of Charles V" (1500) or the dedicated exclusively to women, centered on the cult of the Virgin Mary.

During the exhibition, the director of the BNE, Ana Santos, stressed that it is a "singular, valuable and especially significant" appointment that is made 100% with the funds of the institution, which has more than 800 illuminated manuscripts .

In addition, he pointed out that the importance of this sample is also due to the reasoned catalog that they have made together with the Center for Hispanic Studies that highlights the research and study that has been carried out on these works.

Books that show pages with illustrations in gold, silver and very bright colors that served to accompany the stories they tell or simply as mere decoration. Some works whose decorations were made with bird or cane feathers and with colored inks and gold or silver leaf.

As a preamble to this inauguration, the Prado Museum and the National Library of Spain today organize an event in memory of Javier Docampo, curator of the exhibition, who died on March 27, 2020. His three passions, books, music and friends, will be present at this event as a reflection of his personality and in recognition of his extensive work as a librarian.

It will be followed by a concert of baroque music by "The Fashion of Musicke", a musical duo formed by Jordi Comellas and Alejandro Marías.