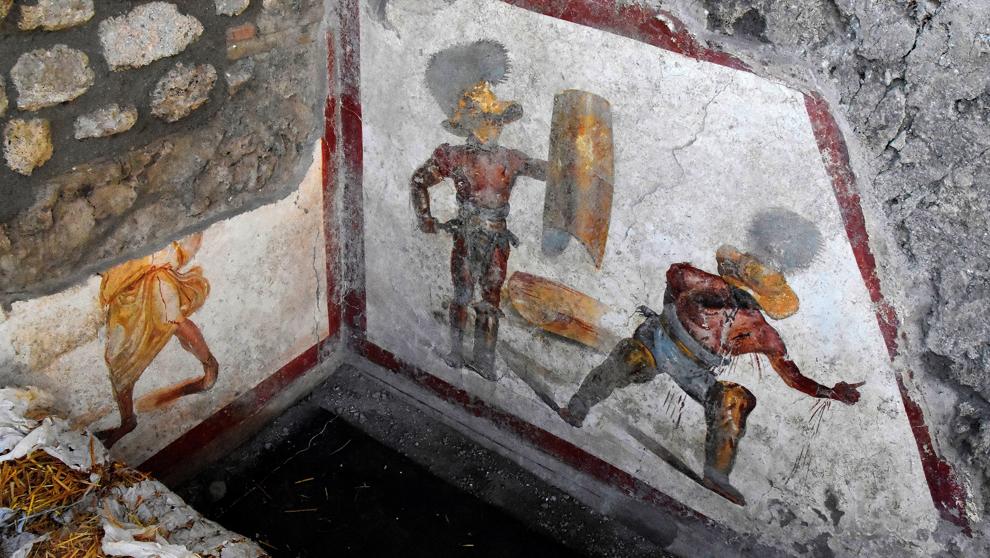 A cool shows the bloody fight of two gladiators, wounded and bathed in blood, is the latest finding in the excavations of the site of Pompeii (south), the Roman city buried and razed by the eruption of Vesuvius two millennia ago.

The managers of the archaeological park announced today in a statement the discovery of this fresco that represents a fight between two gladiators and that has been found in Regio V, the area in which the excsavations are focused lately.

The drawing revives the fight between a “mirmillone” or murmillo, a type of gladiator characterized by its fish-shaped helmet, and a Thracian, with weapons from ancient Thrace, which is currently the Balkan region of the Aegean Sea.


It has been found in Regio V, the area where excavations have recently focused

The first, with a triumphant stance, wields a "gladium", a short sword, and sports a large golden shield and a helmet with visor and plume, while the second, practically defeated, appears with the shield on the ground, injured and gesturing with the left hand.

“There is a singular gesture that the wounded fighter makes with his hand, perhaps to implore his salvation. It is the gesture of lo ad locutia ”, usually made to the emperor or to the general to request grace,” explains the general director of Pompeii, Massimo Osanna.

The fresco, 112 cm by 150 cm, has been found in the living room of a house that is located at the crossroads between the alley of the Balcones and that of the Silver Weddings, has a trapezoidal shape and was under a ladder, presumably In a storage. Experts believe that he probably decorated a tavern frequented by gladiators, merchants and prostitutes.

The fresco, 112 cm by 150 cm, has been found in the living room of a house that is located at the crossroads between the alley of the Balcones and that of the Silver Weddings

Osanna highlights the "extremely realistic" representation of wounds, such as the one shown on the wrist of the defeated and from which emanates the blood that soaks his clothes, to the legs.

The Italian Minister of Culture, Dario Franceschini, has celebrated this latest discovery that, in his opinion, demonstrates a change of course in the management of the site, until a few years ago mired in carelessness and affected by thefts and landslides.

“Today Pompeii is a success story with millions of tourists. It is a cozy place and, above all, to which one has returned to investigate by means of new excavations ”, points out the minister.

Well, in his opinion, this last treasure shows that Pompeii, buried by the violent eruption of Vesuvius in 79 AD and rediscovered in the 18th century, is "an inexhaustible mine for the knowledge of today's and future archaeologists."

The electrical rebellion of the first ‘rock’n’roll’ | Babelia

Plcido Domingo is discharged from hospital after Covid-19 – La Provincia