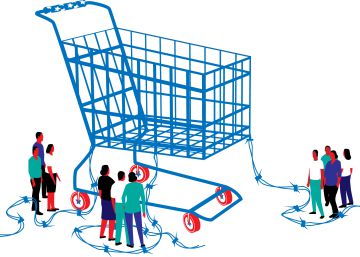 US President Donald Trump has based his foreign policy on a series of tough economic blockades, designed to intimidate, pressure and even starve the target country, and thus force him to submit to the demands of the United States. Although the practice is less violent than a military attack, and is carried out with financial rather than naval means, the consequences for civilian populations are often terrible. That is why it is necessary to submit the US economic blockades to the scrutiny of the United Nations Security Council in accordance with international law and the UN Charter.

During the 2016 election campaign, Trump criticized the frequent US appeal to the war in the Middle East. Between 1990 and 2016, the United States began two major wars with Iraq (1990 and 2003) and others in Afghanistan (2001), Libya (2011) and Syria (2012). He also participated in many smaller-scale military interventions (in Mali, Somalia and Yemen, among other countries). The conflict in Syria is often described as a civil war, but in reality it was a war of regime change led by the United States and Saudi Arabia, under a US presidential directive called Timber Sycamore.

With none of these wars led by the United States (and others in recent history) the desired political result was obtained, and the most important conflicts were followed by chronic violence and instability. The attempt to remove Bashar al-Assad from power by force in Syria led to a war by intermediaries (involving the United States, Syria, Russia, Saudi Arabia, Qatar, Iran, Turkey, Israel and the United Arab Emirates) that caused the displacement of more than ten million Syrians and nearly half a million violent deaths.

While Trump has so far shied away from starting a new war, he is still trying to change the regime by other means. Although he is described as isolationist, Trump is as interventionist as his predecessors. His strategy, at least until now, has been to put pressure on opponents based more on the economic power of the United States than on its military strength; this creates other forms of cruelty and destabilization, with constant risk of starting a declared war, as happened with Iran this month.

Trump is as interventionist as his predecessors. His strategy, at least until now, has been to pressure opponents based more on the economic power of the United States.

Currently, the Trump Administration is engaged in three attempts of comprehensive economic blockade (against North Korea, Venezuela and Iran) and several smaller scale against countries such as Cuba and Nicaragua, in addition to an increasingly intense attempt to leave China without access to technological supplies. The blockade against North Korea is carried out with the approval, at least partial, of the UN Security Council; in direct opposition to the Council in the case of Iran; and without endorsement or opposition of the Council, until now, in that of Venezuela. The objective of the United States is to leave the three countries almost totally isolated from international trade; this generates shortages of food, medicines, energy and spare parts for basic infrastructures, including water and electricity supply networks.

The blockade against North Korea operates mostly through sanctions issued by the UN, and includes a broad list of export and import products and financial relations with North Korean entities. The United Nations Food and Agriculture Organization reports that ten million North Koreans are at risk of hunger, in part because of sanctions. According to the organism, "it is not possible to dismiss the undesirable negative impact that sanctions may have on agricultural production, through direct and indirect effects. The most obvious are the restrictions on the importation of certain items necessary for agricultural production, particularly fuels, machinery and spare parts. "

Drastic US sanctions against Venezuela were implemented in two phases. The first, which began in August 2017, was aimed mostly at state oil company PDVSA, the country's main source of foreign currency; The second round of sanctions, imposed in January 2019, was broader and aimed at the Venezuelan Government. A recent detailed analysis of the first round of sanctions shows that they have had a devastating effect. US sanctions aggravated preexisting economic mismanagement and contributed to a catastrophic decline in oil production, hyperinflation, economic collapse (the Venezuelan economy was halved compared to 2016), hunger and rising mortality.

The United States has applied sanctions against Iran more or less continuously since 1979. The most recent (and by far the most drastic) measures, introduced in August 2018 and reinforced in the first half of this year, seek to isolate Iran from International Trade. These sanctions are in direct contravention of Resolution 2231 of the UN Security Council, which endorsed the 2015 nuclear agreement with Iran. The effects have been devastating. The International Monetary Fund forecasts that Iran's economy will have contracted by 10% between 2017 and 2019, and that inflation will reach 30% this year; There is a shortage of medicines.

One might think that bypassing US sanctions should be easy for other countries, but Washington promised to punish foreign companies that do not respect them, and used the international importance of the dollar as a weapon, threatening to sanction foreign banks that finance trade with Iran. . European companies surrendered one after the other, despite the European Union's expressed desire to maintain economic ties with Iran. Although it is likely that over time there will be ways to circumvent US sanctions (appealing to the yuan, the ruble or the euro as instruments of international financing), its weakening will only occur gradually.

Despite the intense (in fact, calamitous) economic suffering inflicted on North Korea, Venezuela and Iran, none yielded to the demands of the United States. In this sense, the sanctions have been as ineffective as a military intervention. North Korea maintained its nuclear arsenal, and is likely to expand it. The Iranian regime rejects US demands in relation to its missile program and foreign policy. And the president of Venezuela, Nicolás Maduro, remains in power. The US blockades have been carried out through presidential decrees, almost without public debate or systematic supervision of the Congress. They have been unipersonal measures, even more than wars by presidential decision, which generate much more public scrutiny. Trump knows that he can impose devastating sanctions abroad almost without direct costs on the public opinion or the budget of the United States, and practically without political accountability.

Military blockades are acts of war, and that is why they are subject to international law and the supervision of the UN Security Council. The economic blockades of the United States are similar in function and result to a military blockade, with devastating consequences for civilian populations, and at the risk of provoking wars. It is time for the Security Council to deal with US sanctions regimes and evaluate them according to the requirements of international law and peacekeeping.