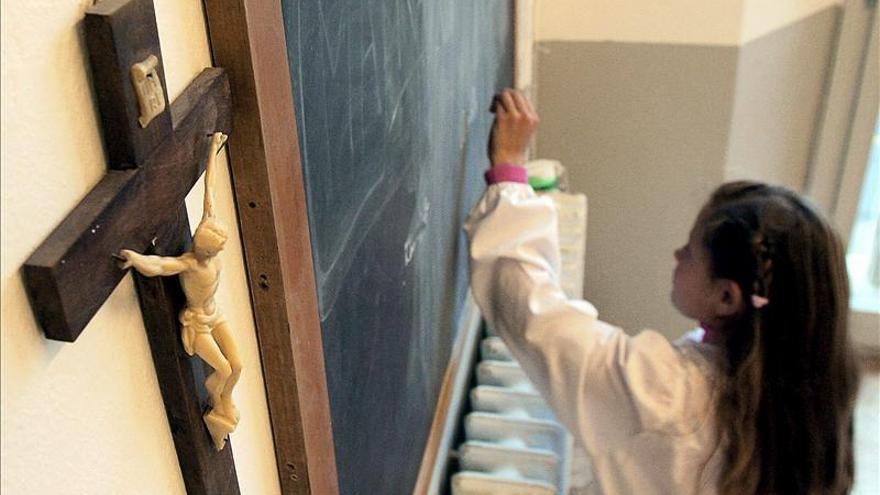 The bishops promote “freedom of expression”, “democratic values”, “the pluralism of democratic societies”, the “eradication of inequality between men and women” or “environmental sustainability” … within the Religion class. At least that’s how it appears in the draft that the Episcopal Conference made public this Monday and that he handed over to the Minister of Education, Pilar Alegría, in a meeting held last week. Habemus curriculum.

In the meeting with the minister, the spokesman for the Spanish Episcopal Conference (CEE), Luis Argüello, once again proposed to Education the creation of a common area of ​​Values, in which the subject of Religion would be embedded, along with other subjects, as elDiario.es has learned. This would suppose, on the one hand, a certain loss of control over the content of the subject (which, by virtue of the Church-State Agreements of 1979, the bishops define, who also elect – and fire, although they do not pay – the professors of the subject), but on the other hand, the assurance that Religion was not taken out of school hours.

The objective has been half achieved. According to the draft that Education manages, the Religion class will no longer have an alternative, it will still not be computable for media purposes but it will continue during school hours, despite the fact that the previous minister, Isabel Celaá, hinted that she would stay out. It will finally be each center that decides what time to place the subject, as is the case now. The fact that they have no alternative, say Episcopal sources, will make most of the schools place the subject “at the first hour or at the last minute” – you cannot have students without class in the middle of school hours -, which could cause that many Catholic parents did not enroll their children in this subject. “Or on the contrary, that for reasons of family agenda, the children have to go to Religion because they cannot return home,” adds a bishop, more optimistic.

The subject is currently at historical lows in terms of enrolled students. For the first time, the percentage of students who choose this subject is about to drop below the 60% barrier; it drops three points from the previous year and more than 10 points in a decade, when the percentage of students was 71%. The situation is especially negative for the Church in public school: half of the enrolled students are no longer reached (48%), and only in Primary do the majority (52%), while in Baccalaureate only a third choose it of the students. The subsidized centers (mostly Catholic) are the bastion of resistance and harvest 90% of students for that class.

The fault, according to the bishops, is the pandemic. And of “the instability spilled on the class of Religion” in the LOMLOE, they add, that it wants to put an end to the privileges of a matter shielded by the Church-State Agreements.

Be that as it may, the bishops have wanted to take a step to renew the subject and present it as a subject that prepares the student “for the active exercise of citizenship and the appreciation of human rights, as well as the pluralism of democratic societies; have understood with values ​​of respect and inclusion the differences between people and societies, and different cultures and religions “.

Thus, they have designed a new curriculum that includes the eradication of poverty, the “denunciation of situations of exclusion, injustice or violence”, the promotion of “freedom of expression” and the appreciation of “democratic values” .

In Infantile, the episcopal proposal advocates “discovering, developing and expressing personal identity through the knowledge of their body and the development of their affective capacities and qualities, through the identification of models of significant people and biblical figures, to acquire autonomy in their daily activities and basic relationship habits, “while for Primary students, the Church will provide” criteria for the analysis and denunciation of all situations of marginalization or inequality between men and women. “

In ESO, the subject seeks the involvement of young people “in social transformation and the achievement of the common good” and is identified with the Sustainable Development Goals. Terms such as “universal brotherhood” or “sustainability of the planet” are among the curricular objectives of the subject, in which (according to the Episcopal Conference) the Church assumes as its own “all situations of exclusion or poverty, of violence or injustice, of inequality between men and women and proposes the eradication of these problems “.

At the same time, they suggest that students learn in Religion class to build “their own identity and respect that of others”, as well as to “cooperate in the construction of democratic societies.”

And Religion? Despite what has been transmitted through the media, the bulk of the subject will continue to be the classic (and controversial) inclusion of the values ​​of a religious confession (in this case, Christianity) in public school. Thus, the curriculum raises six specific competencies based on theology, the Social Doctrine of the Church, the dialogue between faith and culture, the discovery of the cultural heritage of the Church, the spiritual dimension of the student and the synthesis of the Christian message.

From Infantile, students will recognize Jesus as a key figure of Christianity, they will know the Virgin Mary, the Bible and the most common Christian prayers and practices. Other aspects, such as the Sustainable Development Goals, arise from the perception that “God has a project of communion for humanity, announced in Jesus Christ: overcoming evil and death, building a common home, fraternity universal, the inclusion of each and every human being in a sphere of full humanity “.

They also want the students to learn to appreciate “the cultural richness of Christmas and Easter and other celebrations as an expression of the cultural identity of society” and to know “the message of Jesus of Nazareth in favor of equality” and “the recognition of the role of women in the Bible “.

Finally, they suggest that students know how to develop “a meaningful personal life project that responds to values ​​of self-care, of others and of nature, respecting those of others, taking Jesus Christ as a reference.”