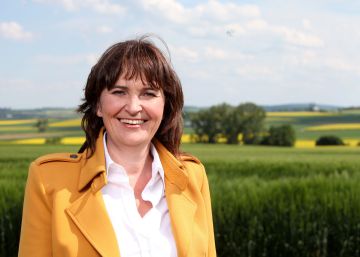 Mechthild Heil is a German conservative parliamentarian, from Chancellor Angela Merkel's party. But she is also the president of the powerful community of German Catholic women, on a war footing to demand equality in the Church and access to all positions reserved so far only for men. About 450,000 women belonging to 4,000 associations across the country, form the KfD, for its acronym in German, which participates in the incipient process of reformist dialogue of the German Church and to which Rome opposes.

This week, German bishops meet to discuss this and other matters and there Heil and his companions appeared on Monday to demand that they listen to them. The role of women in the institution is one of the four thematic blocks that the German Church intends to discuss this winter in the so-called synodal path, the forum that Rome fears that opens a dangerous crack in the universal Church.

Heil receives this newspaper in his office of the Bundestag in the German capital, where he speaks without euphemisms of the need for reform of the institution and the optimism aroused by the German dialogue.

Question. You demand that women can hold any position in the ecclesiastical hierarchy. They have started a campaign and signature collection. Because right now?

Reply. Last year the study on abuses within the Church was published and explained that there are structural problems. With sexual morality, with the formation of priests in seminars … if they have no experience or sexual maturation, how are they going to explain it to the students? All this contributes to the abuses, also the fact that there were no women involved. A woman, perhaps she would have said that it could not be managed like this, that one could not simply move the priest to another place. The bishops understood that the study had to have consequences.

P. That was the catalyst. What do they ask now?

R. A year ago, Catholic women did not have an agreed position on whether we wanted to be priests or not. Our assembly met and community representatives voted for unanimity in favor of having the same rights as men in the Church. Without women, the Church would not work.

P. The president of the Episcopal Conference, Cardinal Reinhardt Marx told them on Monday that he is aware that he needs to move and that he is driving changes, but also, that for there to be progress as time is needed. Do you trust the bishops' reform plans?

R. We have a lot of experience with slow processes [laughs]. Many older women have grown tired of waiting and have moved away from the Church. But now, we attend a new momentum. There is a lot of motivation between young and old. Many women call us to sign up. Today, three parliamentarians have asked us to join. People feel that now something can happen.

P. What themes do you want to bring to the reformist dialogues?

R. The problem is not Pope Francis, the problem is the people around him. German bishops who are against the process ran to see the Pope. The Vatican is afraid of the German Church separating, they see us too close to the Protestants. In Austria and Switzerland there are also initiatives similar to ours.

P. Do you think there is a real risk of schism?

R. No. That is an argument that Rome uses to discipline countries.

P. Have you knocked on the Pope's door?

R. I wrote to him, but at the moment we have no answer.

P. Why do you think that in Rome they oppose the synodal path?

R. Rome wants the bishops to have the last word and not the laity, but we must also be able to say what we want. The challenge now is to influence the bishops, but I think the majority is with us. I think they have realized after the study of the abuses that this cannot be continued. Another thing is to put the changes in motion.

P. Where do you think the reluctance to equality for women in the Church is born?

R. They have to give up power, the opposite is profoundly anti-Christian. There is no theological reason. I don't care what happened 2,000 years ago. The Church has always been changing and the situation today is different. The bishops are afraid that if something changes, everything jumps through the air. We do not fight for power, but for responsibility to make decisions.

Before saying goodbye, Heil offers one of the pins enamelled with a purple cross, which Catholic activists carry on these lapels these days to make it clear that theirs is a struggle for the reform of institutions from within, but at the same time in voice high.