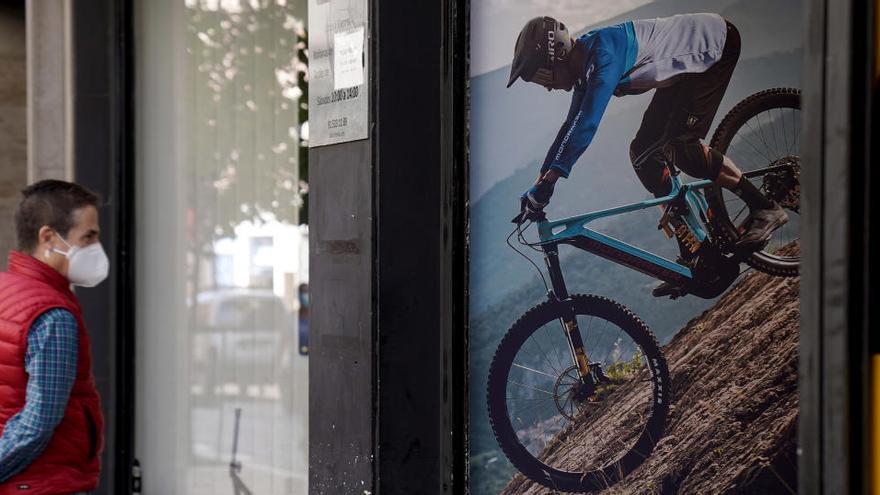 The boom that the demand for bicycles in Spain In recent months, after the end of the state of alarm, it will foreseeably make the sector one of the few in the Spanish economy closing 2020 positive and even grow more than it grew in 2019.

“It is not unreasonable to say that the year will be able to close enough above 1,871 million euros of business volume and the more than 1,260,000 bicycles sold in 2019, “Carlos Núñez, general secretary of the Association of Brands and Bicycles of Spain (AMBE), assures the Efe Agency.

And the fact is that the numbers speak for themselves: according to the AMBE, stores and department stores have experienced in the most recent months an increase in demand of 400% with respect to the period prior to confinement. For this reason, and although it is still too early to take stock, the sector expects a “very considerable” increase in sales, even exceeding the 20% that grew in 2019 compared to 2018.

The demand has been such that stores have come to have stock problems for some models, mainly the cheapest. These models of bicycles, the so-called “first price”, are the ones that have been the most successful in recent months, both in urban categories and for recreational use (‘mountain bike’ or all-terrain), and in a price range between 400 and 1,000 euros.

According to Núñez, the lack of units began to be noticed in June and July, causing that during the month of August “it has been very difficult to find cheap bicycles in all the country”.

The main factors that have caused this increase in the demand for bicycles have been two: the desire of citizens to enjoy the outdoors after confinement and choosing the bike as means to go to work and thus avoid public transport. For this reason, urban bicycles with more adjusted prices, ideal for commuting to work, have been the best sellers in recent months.

The high demand, however, has not caused an increase in the price of bicycles, but quite the opposite: “As demand has been concentrated in cheaper models, we expect the average price to decrease slightly compared to 204 euros in 2019 “, explains Núñez.

Impulse of the authorities

The different autonomous governments have also promoted this growth with some measures, such as the massive pedestrianization of streets and the expansion of bike lanes in some cities. Big cities like Madrid or Valencia have also started aid plans to buy bicycles, urban or electric, which can reach 600 euros.

For the AMBE, despite the fact that all the media “are very well intentioned”, those of the Community of Madrid, which can earn 50% of the price of the electric bicycle, “are the model to follow”. In this sense, the sale of electric bicycles have also suffered a “notable increase”.

Newcomers to the sector will also be able to take advantage of this aid, since according to the AMBE many of the buyers during these months have been people who did not previously use the bicycle, a trend that is observed “globally”.

But for the sector to continue growing, Núñez believes it necessary to carry out “measures to boost the supply of cycling mobility”, among other places in Madrid, which is currently “light years away from other European capitals.”

The boom in the sector is not limited only to Spain: the phenomenon of bicycle sales in recent months has spread to many countries with leading economies.

In May, in the UK grew demand by 200% and the stock was exhausted on surfaces such as Decathlon. In the United States something similar happened: at the end of April the low-end models had been sold out, with a growth of 121% in urban bicycles and 85% in electric ones.

It should be remembered that the stoppage of factories in Asia, in which many of the components of bicycles are manufactured, began even earlier than in Spain, so the global supply chain began to be affected as early as the first quarter of the year.

This situation has caused the high demand for bicycles to be joined by a limited supply caused by the global economic slowdown in recent months.

Despite the current economic uncertainty, the sector’s short-term prospects are promising, having even had to bring forward the start of the 20/21 season to cope with the exaggerated demand from distributors.

Tags: be, bikes, boom, sector, will do