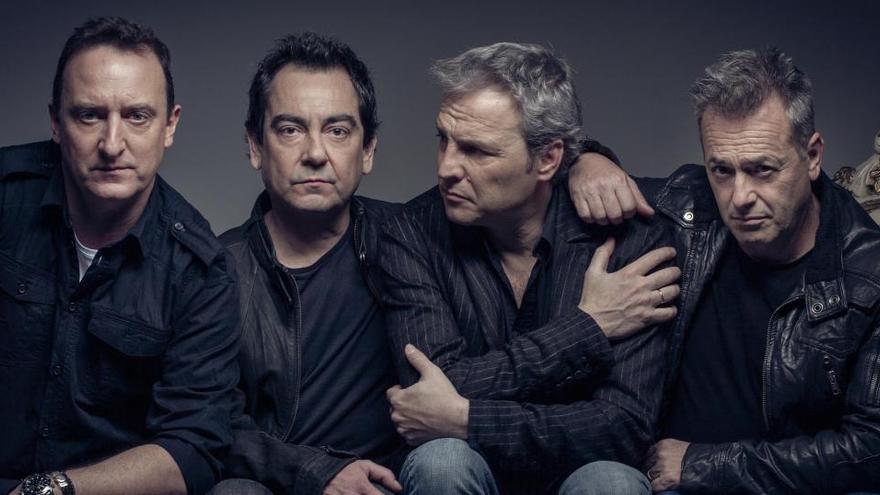 Irreverent humor, romanticism and freshness were the keys to the Men G success and the huge fan phenomenon that they unleashed in the mid-80s in Spain and Latin America, but also the contempt on the part of a critics -eminently male- to whom time has not proved right.

David Summers and his people talk about all this and much more in “We have never been the handsome ones in the neighborhood”, a new biography that they have just published in which they review their 37-year history, with more than 20 million albums sold, from their beginnings as a punk band to their last tour of “Resurrection”, interrupted by the covid-19.

In a music scene marked by the experimentation of the Movida Men G’s greatest transgression was going free, Try to be true to yourself and have a good time, without fear of alternating ska-beat songs and delusional or politically incorrect lyrics with bare-chested romantic ballads.

In recent years they have received recognition in the form of awards such as the Grammy honorific and a Gold Medal for Merit in Fine Arts and the joy of seeing that they continue to fill auditoriums, while they already prepare what will be their next album.

These are some of the key moments and anecdotes evoked in the book, edited by Plaza & Janés and written by journalist Javier León Herrera.

Punk was key in the formation of Hombres G with its philosophy of ‘make it simple, your way’. David Summers, who at that time played the clarinet, changed course after seeing the movie “The Great Rock and Roll Swindle” (1980) about the Sex Pistols.

Together with his childhood friend Javi Molina (drums) and a punk named Pepe they formed the group Los Residuos, which was soon joined by Dani Mezquita (guitar). They played for the first time at the Complutense College of Industrials with Alaska and the Pegamoids. In the book they remember those performances more for the spitting left and right and the total riot than for the music.

One day they found out that on the TVE program “Aplauso” they were looking for musicians to record a ‘playback’ of a performance by Carmen and Antonio, Rocío Dúrcal’s children. They paid 5,000 pesetas.

There they presented themselves and that was how they met the one who would end up being the fourth member of Hombres G, the solo guitarist Rafa Gutiérrez. The video of the performance, with the recognizable profiles of some of them in the background, it can be seen on YouTube.

The footprint of cinema

The four members of the group were passionate about music. They listened from the Sex Pistols to the Beatles, from Squeeze and Police to Jackson Browne and Carole King, from Bruce Springsteen to Deep Purple or Pink Floyd, passing through the orchestral music of Benny Goodman or Glenn Miller.

Summers was also a movie buff by paternal heritage and that imprint was reflected in his name. First they played Los Bonitos Redford, but no one was convinced and the G-Men came up for the James Cagney film “Against the Empire of Crime” (1935), whose original title was “G-Men”.

For their first single, released in 1983, the group’s bet was a song called “Miracle in the Congo”. Two days before entering the study, Summers composed another for the B-side without much pretense. His name was “Venezia”, ​​inspired by a James Bond movie, and he was helped with the lyrics by a half-Italian girlfriend he had at the time. The rest is history.

In the partially autobiographical film of “Suffer Mamón” (1987) It was Marta Madruga, already a real-life partner of David Summers at that time, who played the singer’s girlfriend, the one who “left with a posh child” and ignited the hatred of half adolescent Spain.

But the real protagonist of that episode was called Immaculate and she was David Summers’ first love at age 16 in Madrid’s Parque de las Avenidas. “I was getting more and more punk and she became more and more posh, until she left me for another pijín “, she remembers in the book.

Before giving one of his first concerts at the Rock-Ola room, Summers found out that ‘Macu’ was going to be there with his new boyfriend, so he ran home and composed the song to play it right under his nose. “I wrote it exclusively for that day, all I wanted was to fuck off the guy who had stolen my girlfriend, “he recalls.

After knocking on the doors of all multinationals without success, Paco Martín offered to publish their first album on a new label, Twins, which went on sale on March 11, 1985.

From then on everything started to go very fast, but the day they remember as the beginning of the rest of their life was June 1, 1985, a concert at the Sala Astoria in Madrid to which they arrived by the hair and hangover, and where they were surprised by a crowd that chanted all their songs. That summer they did more than 60 concerts and by October they were already gold records.

From the beginning the concerts of Hombres G were mostly filled with crazed teenagers who They threw bras on stage when they did not climb themselves to the point of having to intervene in riot gear on occasion.

They chased them wherever they went, they received avalanches of calls at all hours. Summers dedicated the famous song to them “Attack of the crocodile girls”. And if the phenomenon was strong in Spain, in Latin America it was even greater, they were called the Latin Beatles.

Due to wear and tear, the group broke up in 1993, but for years their albums continued to be sold, especially in Mexico, and in 2001 the idea of ​​rejoining began to gain strength to give a concert in that country.

In 2002 they went back into a studio and embarked on a tour of America where they could see whatand they continued to fill large auditoriums and hanging ‘no tickets’ signs. Since then they have released four more albums, with a fifth coming soon.