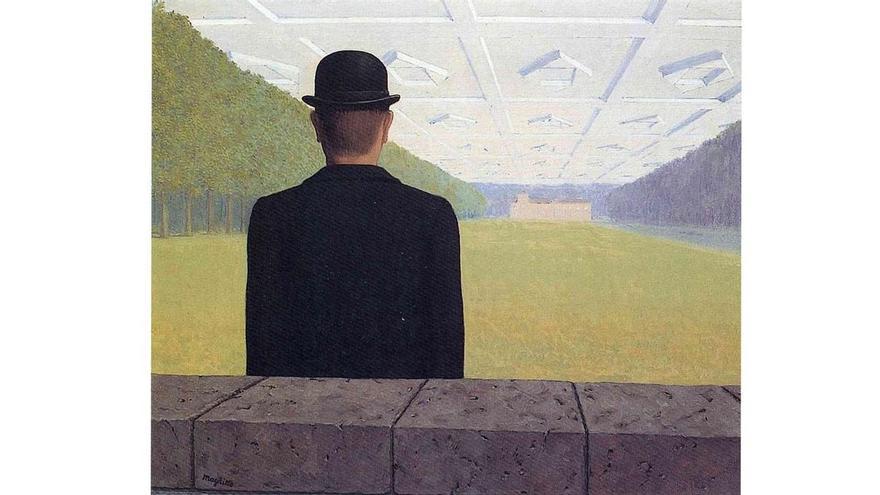 With a 2021 marked by the covid, with a recovery of visitors compared to 2020 but still far from reaching the pre-pandemic figures, with more local audiences and fewer tourists, the museums face 2022 dumped in new exhibitions. We review the best of art what will come in the new year.

'Going to the Ball (San Martino)', by William Turner. MNAC

From Turner to Carracci

MNAC. The painter of light and landscapes, William Turner (1775-1851), will arrive at the National Museum in May, in collaboration with the Tate Modern in London, in parallel with a selection of works by Catalan artists of the 19th century who, like him, showed their sensitivity towards nature. And we will have to wait until June to see the paintings that the Baroque artist made were uprooted and scattered for the first time since the last century were gathered together for the first time. Anibale Carracci for the Herrera Chapel in Rome.

Two works by the surrealist Magritte.

Between Magritte and Gaultier

CAIXAFORUM. It will arrive on February 24 at Barcelona, after passing through the Thyssen in Madrid, 'The Magritte machine'A spectacular show with 70 paintings and various materials that delves into the universe of the Belgian surrealist master. After 'Tattoo. Art under the skin '(May), which will search for the origins of the practice of tattooing with an ethnographic, geographical and artistic approach through 150 works, will land in the old Casaramona factory (after passing through Madrid)'Cinema and fashion. By Jean Paul Gaultier' (July). CaixaForum Madrid will travel the comic history (May) and will reveal the mysteries of six mummified Egyptians between 900 and 150 BC in 'Mummies of Ancient Egypt '(July), with pieces from the British Museum.

The photography of Carrie Mae Weems and Jorge Ribalta

CENTRO KBR AND FUNDACIÓN MAPFRE. A retrospective, curated by the director of Macba, Elvira Dyangani, will pay tribute in October, at the KBr Center in Barcelona, ​​in collaboration with Photo Colectania, American Carrie Mae Weems, a photographer ahead of her time. His work speaks of violence against the black community to which he belongs and against the world in general, but also about love, race, class society or politics. Before, in February, they will have been able to enjoy the heterogeneous work of the American Lee Friedlander and the work of the 'noucentista' Adolf Mas, which documented the transformation of Barcelona at the beginning of the 20th century. Also next month, at the Mapfre Foundation in Madrid, another great retrospective, 'Everything is true. Fictions and documents', from Barcelona Jorge Ribalta, from its beginnings to documentary photography. And, making a face of the Year of Picasso (2023), an exhibition (September) on the collaboration of the man from Malaga with Julio González, illuminating a new type of iron sculpture.

Tosquelles psychiatry and the secrets of the brain

CCCB. The singular and charismatic psychiatrist exiled in France during the Franco dictatorship Francesc Tosquelles (1912-1994), who reinvented psychiatric institutions claiming culture as a healing tool and perceived madness as the essence of human nature, will star in 'Like a sewing machine in a wheat field' (April), which will precede at the Center of Contemporary Culture of Barcelona to 'Brain (s)' (July), on the unknowns that this body still raises for science today. The year will close, 'Graphic Constellation' (December), which will make visible to the new generations of Spanish comic authors, among them, Geni Espinosa, Ana Galvañ, María Medem and Nadia Hafid.

The forerunner of pop art

THYSSEN MADRID MUSEUM. In the absence of a date to visit the Thyssen collection on the ground floor of the museum, 'Hiperreal. The art of trompe l'oeil', with examples of the ability of some artists, from the 15th century to today, to deceive the viewer. In retrospect of the American Alex Katz, a precursor of pop art still active, in June, it will continue, in October, as a prelude to the Picasso year (2023), an exhibition about the collaboration and friendship between the artist and the designer Gabrielle Chanel.

Klee and the collector Miró

FUNDACIO MIRÓ. From a Mironian perspective and without losing sight of the climate crisis, 'Paul Klee and the secrets of nature ' (October) will delve into the fascination of the Swiss German artist (1879-1940) for natural phenomena. Before -March 31-, 'The most intimate legacy ' will reconstruct the facet of Joan Miró as an art collector through the works that the artist kept or gave to his family, who donated them to the Fundació following his will and expanding the works in the deposit.

'On one side and the other', 2020, by Teresa Lanceta. Garcia-Bautista

The textile art of Teresa Lanceta

MACBA. Since the 70s the Barcelona Teresa Lanceta with his work he has vindicated weaving as a means of artistic expression. In April, 'Weaving as open source', covers its trajectory with a selection of tapestries, canvases, paintings, drawings, writings and videos. For July, the Museu d'Art Contemporani de Barcelona prepares the first monographic in Spain of the Brazilian Cinthia Marcelle, recognized for its impressive film work and its monumental installations.

The creator of art brut

GUGGENHEIM BILBAO. In February, double offer at the Basque art gallery: from the 11th, 'From Fauvism to Surrealism', with 70 masterpieces by Delaunay, Modigliano, Picabia or Giorgio de Chirico (February 11 to May 22), and from the 25th, an exhibition on Jean Dubuffet (1901–1985), creator of art brut, who challenged preconceived norms and ingrained artistic values, disdaining all academic training. And watch out for the proposal that will arrive in April with the close collaboration of the architect Norman foster: 'Motion. Autos, art, architecture ', with 38 iconic cars and rarely seen in dialogue with 300 works of art.

FOUNDED VILA CASAS. La Vila Casas will open on January 20 in the Espais Volart an anthology of the expressionist imaginary by Luis Claramunt (1951-2000) and will continue with 'Tribute to Picasso. Vallauris, 1972 ' (May), which will recall the attacks by far-right groups in bookstores and galleries that in 1971 wanted to celebrate the artist's 90 years and the support of colleagues such as Miró, and with another anthology of the designer Oscar tusquets (October). In June, another exhibition will remember the versatile Josep Maria Subirachs in Can Mario de Palafrugell.

THE STONE. After the stoppage due to the pandemic, La Pedrera recovers the exhibitions. The first (February 4), organized by the Mapfre Foundation, on the unclassifiable and refined painter and engraver Giorgio Morandi (1890-1964) author of numerous still lifes marked by light, harmony, austerity, fragility and lightness.

PICASSO MUSEUMS. The trajectory of the Portuguese Paula Rego, which revolutionized the representation of women since the 60s, with series such as 'Aborto' or 'Dog Woman', and redefined figurative art, in addition to denouncing the dictatorship of its country, will be displayed in the Picasso Museum in Malaga through 80 pieces –'collages', paintings, pastels, drawings and etchings. (April 26, organized in conjunction with Tate Britain and the Kunstmuseum Den Haag). The Picasso of Barcelona will focus on the blue era by the painter from Malaga showing (April) the result of technical and scientific studies on works from that period, in collaboration with the National Gallery and the Instituto Nero Carrara Florencia.

From Duras to an unusual Miralda

LA VIRREINA CENTER DA LA IMATGE. On forays into the cinema, theater, radio or television of Marguerite Duras, In addition to his literary work, he will deal with 'Outside the field' (April), a show that will come after which he will show Antoni's facet as a fashion photographer Miralda (March), with unpublished images. La Virreina will also focus on the unclassifiable artist Amèlia riera (July) and the Portuguese filmmaker Pedro Costa (October).

Room with works by Néstor Sanmiguel.

REINA SOFIA MUSEUM. Graphic art as a tool for social vindication will come twice to the Madrid center: with 'From Posada to Isotype, from Kollwitz to Catlett' (March 22) and 'Graphic turn: as in the ivy wall' (May 17) . Next to a great installation of the Portuguese Carlos Bunga (April 7) and the monograph on Spanish Nestor Sanmiguel, 'The adventures of the automaton' (June), broad female representation: the emblematic Guatemalan feminist and rebel Margarita Azurdia (October); the tandem of the switzerland Pauline boudry and the german Renate lorenz (October, Crystal Palace), Argentina Alejandra Riera (May) and the Spanish Leonor Serrano Rivas (September).

Among other exhibition proposals that can be seen in Barcelona highlights the tribute, on the 35th anniversary of his death, to the writer and chemist Cousin Levi, victim of the Nazi camps, at the Born Center de cultura i memoria (April). Fabra i Coats will plant in 'Perifèria de la nit' (February 19) an immersion in the universe of the Thai artist and filmmaker Apichatpong Weerasethakul, for whom the moving image is an extension of the soul, while the Museu Etnològic i de Cultures del Món will exhibit in July a selection of photos that portray women from all over the world and different times. In addition, the latest works by Jaume Plensa, Català de l'Any, will inaugurate the extension of the Museum of Modern Art in Céret (France).

To London via Venice and Kassel

On the European scene, two major fairs stand out if the covid does not alter it: the Venice Biennale, since April 23, with the Catalan Ignasi Aballí flagging the Spanish pavilion, and the influential appointment in Germany with contemporary art that is the Kassel documents (June 18 to September 25).

London will be another artistic focus this 2022, with the secrets of Stonehenge at the British Museum (February), an exhibition on the history of surrealism (February) at the Tate Modern and exhibitions of Raphael (April) and Lucian Freud (October) in the National Gallery.

All this, without forgetting the inauguration of the expected new egyptian museum in cairo, postponed by the pandemic.